TOKYO -- Shenzhen Arashi Vision, a Chinese specialty camera startup operating as Insta360, has made a foray into the Japanese market with plans to develop a photo-taking robot.

Established just five years ago, the company sells its products in over 100 countries and opened a Japanese branch at the end of 2019. Although concerns have been raised about the possible impact of the spread of the new coronavirus on consumption, the company aims to increase its market share by expanding its sales network to compete with rivals such as GoPro.

Company founder Liu Jingkang plans to develop over the next five years a "robot cameraman" that can move around and take photos completely on its own, although he does not yet have concrete plans on how to do so.

For now, Insta360's offerings include 360-degree and wide-angle action cameras for stills and video.

Last year, the company demonstrated in Tokyo how the "ONE R" model allows users to switch easily between dual-lens 360-degree and 4K wide-angle action cameras by changing the lens unit. The One R was officially launched in January. 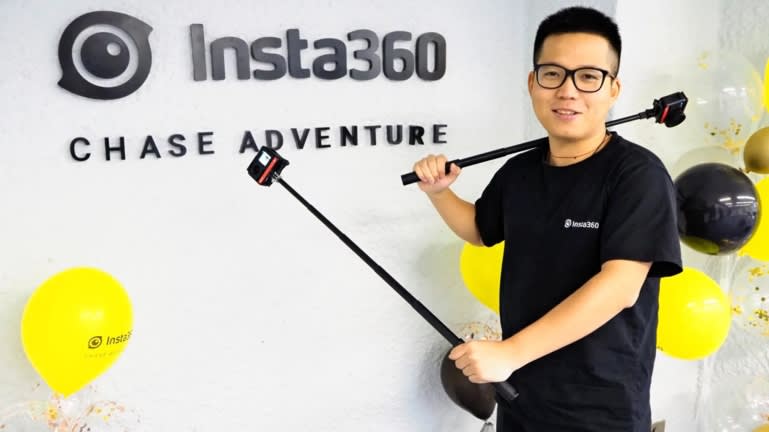 Liu Jingkang has a wild ambition to develop in the next five years a "robot cameraman."

The ONE R is a modular action camera consisting of three basic units for the image processing core, battery and lens. Three types of lens units are available -- a traditional 4K wide-angle lens, a dual-lens 360-degree shooter and a wide-angle module with a 1"-type sensor, or a large one-inch high-sensitivity sensor. These lens modules can be swapped out easily and instantly.

Users can upgrade the system by either buying the processing core or a lens module. This modular approach is designed to mimic how a digital single-lens reflex camera can be adjusted to different shooting needs by swapping the lens.

The innovation-driven camera maker's other workhorses include Insta360 ONE X, a 360-degree camera, and Insta360 GO, a small action camera.

The startup is led by the 27-year-old Liu, a fluent English and Japanese speaker, who created Insta360 six months before he graduated from Nanjing University. He attended a music concert and wanted to develop products to record and share such powerfully moving events.

Liu's first product was a smartphone app for live streaming. But he quickly expanded the firm's product portfolio by developing an accessory to turn a smartphone into a 360-degree camera and other kinds of camera products.

Insta360 updates its software for shooting and editing photos almost every month. "We release software as quickly as possible even if it is less than perfect and improve it later," said Liu.

The ONE R was born out of Liu's realization that software is usually developed more quickly than hardware.

Consumers are naturally unwilling to pay money for new cameras that are not much better than their previous models. It usually takes Insta360 one year to develop new equipment.

The company's answer to this problem is the modular approach, which Liu calls a "camera platform" to make it possible to upgrade different units separately, which translates into greater speed and flexibility. Insta360's ONE R is for sports and outdoor photography. (Photo courtesy of Satoshi Morotomi)

One of Insta360's main competitors is Ricoh, which offers the Theta series of cameras that create high-quality 360-degree spherical images, and South Korea's Samsung Electronics. Insta360 has to battle with GoPro of the U.S. in the action camera segment.

Yet, the agile Chinese startup is doing well in its home country and the U.S. where sales have grown to nearly 3 billion yen ($27 million) and close to 2 billion yen in Japan.

This is despite a shrinking digital camera market. Global digital camera shipments in the first 11 months of 2019 plunged 21.7% from a year ago to 14.16 units, according to Camera and Imaging Products Association. The market is now one-eighth its size in 2010, when it peaked. Digital video camera shipments to Japan also dropped by over 20%, according to the association.

In particular, the sales of compact, point-and-shoot entry models have fallen sharply as they have lost customers to smartphones with increasingly sophisticated camera features.

Insta360, however, is confident about its ability to survive competition from smartphones by offering a wider range of photo-taking possibilities. The company also believes sophisticated software features like auto editing can give its products a competitive edge over smartphones.