Chinese and US unicorns emerge by the dozen in new normal TOKYO/PALO ALTO, U.S. -- Though disruption caused by the coronavirus pandemic has rattled venture capital investment, a handful of startups, particularly in the U.S. and China, have thrived on changing trends in business and consumer spending.

Twenty-two companies worldwide joined the ranks of unicorns -- privately held businesses with valuations of at least $1 billion -- in the three months through June, according to CB Insights. The U.S. and China remained the main drivers, accounting for 13 and three respectively.

"As the lines between home and work have blurred over the past few months, we've seen more Figma engagement than ever before," said Dylan Field, CEO of design software startup Figma, which raised $50 million at a $2 billion valuation in April.

Figma is a cloud-based service that allows for remote collaboration to design projects such as smartphone apps. The tool, already popular among designers, got a boost from the pandemic, tapping into demand for alternative forms of visual communication as workers steered clear of the office.

Figma's success is an example of a notable shift in the lineup of new unicorns compared with the same time a year earlier. The most-represented industry last quarter was internet software and services at five companies, followed by e-commerce along with data management and analytics with three each -- all areas that can help curb the spread of the virus while boosting productivity. In the second quarter of 2019, financial technology led the way, with fields such as logistics and travel not far behind.

"Postman has continued to see strong growth in sales and [has] experienced record usage of the platform since the beginning of the pandemic," said Nick Tran, Postman's vice president for marketing and developer relations. "As more businesses are forced to work more online, or even work online for the first time, there has been a need for more APIs to be created, and more APIs that get used," he added.

Venture capital interest in Postman picked up after the coronavirus became a serious issue. Similarly, Podium, a startup offering chat-based tools for building relationships with customers aimed at small businesses, enjoyed an upswing in growth as the pandemic raised questions about the future role of face-to-face interactions. In China, Beijing Calorie Technology, which topped the $1 billion mark in May, has attracted funding by capitalizing on a growing consumer focus on health. The company operates the Keep fitness app, which features training videos, activity logs and dietary guidance. The app boasts 200 million registered users.

Lockdowns in Chinese cities gave a boost to Dingdong Maicai, which sells fresh produce online in such cities as Shanghai and Beijing. The company expanded its network of warehouses nationwide, enabling it to deliver orders in as little as 29 minutes.

Of the 50 Chinese startups that raised the most money in the first half of 2020, 20 are in medical fields such as genetic analysis and biopharmaceutical development, according to 36Kr Holdings, which operates a Chinese tech news portal 36Kr.

Meanwhile, digitization is shaping up to be a growth driver in more traditional industries. Online property brokerage Beike Zhaofang, which lets customers view three-dimensional images of properties via smartphone without leaving home, has raised $1.5 billion from such investors as Tencent Holdings.

The prospect of society needing to coexist with the coronavirus is accelerating the growth of startups that offer the technology and services needed to do so. The number of new unicorns globally dropped 40% on the year last quarter, as investors grew pickier in industries where the pandemic is weighing on profits while funneling capital to businesses poised to benefit from the crisis.

Times of economic and social upheaval provide opportunities for fledgling enterprises. Instagram, Uber Technologies and Airbnb came out of the global financial crisis of 2008, and Alibaba Group Holding rose to prominence as the 2003 SARS epidemic spurred demand for online retail. 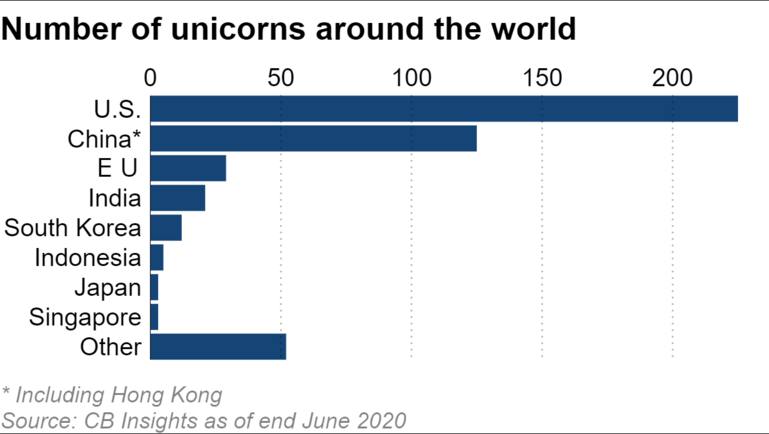 Japan, meanwhile, continues to lag well behind the U.S. and China, producing just three new companies with billion-dollar valuations since last August. The government's goal of having 35 businesses less than a decade old reach the $1 billion mark by fiscal 2024 looks out of reach.

Much of the difference lies in the funding environment. About 400 billion yen ($3.7 billion) is invested in startups annually in Japan, compared with more than $130 billion in the U.S. and $90 billion-plus in China.

While Japanese households and businesses have an abundance of cash, there is little of the risk appetite needed to take a chance on new companies and new technologies. The country needs ways to encourage long-term investors such as pension funds and institutional investors to fund startups that can drive innovation and bring fresh blood into corporate Japan.

Nikkei has a minority stake in 36Kr Holdings.