Adam Jiang, founder and CEO of Syrius Robotics, turned an early aptitude for math and science in an entrepreneurial direction that led him first to Japan, then to Shenzhen to start his company.
SHUHEI YAMADA, Nikkei Asia Tech chief editorJuly 13, 2020 05:08 JST | China
CopyCopied

TOKYO -- Adam Jiang, the 36-year-old founder and CEO of Syrius Robotics, a Shenzhen-based startup, took his first step as an entrepreneur in early 2006 when he called home to his father in Xi'an, Shaanxi Province.

"I'm going to find a job in Japan, Dad," he told his angry father. Fourteen years later, the young man who had fled his strict father and fallen out with him has become a force in the transformation of the warehousing business.

Syrius Robotics makes AMRs, or autonomous mobile robots, which are used to move goods around in warehouses. The amount of goods passing through warehouses has burgeoned worldwide with the growth of online shopping. In the past, items were shifted by automated guided vehicles, which move along preset paths marked out with magnetic tape or other lines on the floor.

Jiang's machines -- he calls them "thinking logistics robots" -- are different. Each has an artificial intelligence chip and can determine its position by analyzing images of its surroundings and operate in harmony with other robots by communicating with them. The robots automatically transport items that a worker places onto them, bringing them to a specified location.

They can process data on their own without waiting for instructions. JD.com, a big Chinese e-commerce business, and other local companies have ordered a total of about 80 units to make up for a shortage of workers. In Japan, where Syrius Robotics began selling its machines in April in partnership with Mitsubishi Corp., more than 40 units have been delivered.

Jiang is now developing a subscription-based business for his robots. The devices can map their surroundings and move about on their own, allowing them to operate in different warehouses by the month. This is a game-changer in the logistics industry, where warehouses' freight facilities are a big capital investment. Venture capital companies in the U.S. and China, including Sequoia Capital and ZhenFund, have bought into Jiang's new business model and are providing Syrius Robotics with financial backing. The robots are being tested in a warehouse owned by a Mitsubishi subsidiary in Yokohama to improve their precision so that they can be used in Japan's small and often crowded facilities on a subscription basis.

"I'm like our AMRs. I don't like to be ordered around," Jiang said. Jiang was born in 1983, the child of a technical bureaucrat in the Xi'an municipal government and a pediatrician. He was good at science and math, and got a silver prize in a physics contest in Shaanxi Province while in high school. But the bright young man took a different career path from the one his father envisioned for him.

His grades in high school were good enough to draw interest from top universities in Beijing and Shanghai, such as Tsinghua University and Fudan University. But at his father's request, Jiang went to Xi'an Jiaotong University. While that university is also prestigious, Jiang felt it could not expand his horizons only 15 minutes from home.

He continued his studies in AI, but his discontent grew. After he graduated, his father wanted him to follow in his footsteps: He found Jiang a job as a technical bureaucrat at the municipal government and lined up a suitable future wife for him.

In China, senior local government officials wield enormous power. If Jiang had taken the career path his father laid out for him, he could have lived a secure, comfortable life. But, said Jiang, "I wanted to leave my father," so he accepted a job offer from a systems developer in Japan. 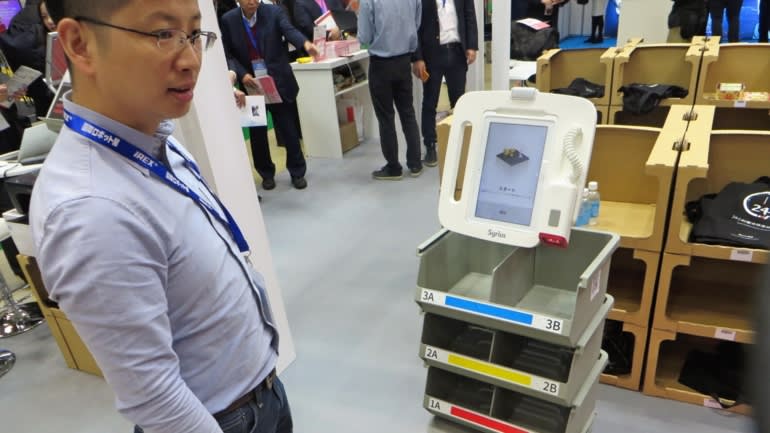 Jiang shows off his autonomous warehouse robot. Syrius Robotics counts companies such as China's JD.com among its customers.

Jiang belongs to a generation of people born in the 1980s. Chinese of this generation are said to be willful -- the product of China's previously strict one-child policy. At the same time, they are thought to be bold and free of old conventions.

A year after he began working in Japan, Jiang began graduate studies in the U.S. But he dropped out after his scholarship was terminated in the wake of the global financial crisis. He later worked as an engineer at an information technology company, shuttling between the U.S. and Japan.

Jiang said he "just liked computers and was not thinking of earning a living from them." He took on jobs that he found interesting, such as developing a receiver for digital terrestrial TV broadcasts for mobile phones. But he remained restless; as he gained experience, he became dissatisfied.

"Technology development has become an end in itself and it is not serving society." This was the conclusion he reached while working on augmented reality technology with Google as an engineer at Nvidia, a major U.S. chipmaker, in Silicon Valley around 2015. He later got the idea of using AI robots to resolve the problem of labor shortages at logistics hubs and decided to start a business in Shenzhen. That is how Syrius AMRs came to be.

Jiang eventually reconciled with his father, with whom he was barely on speaking terms at one point, even traveling around Japan with him. "I want to gain recognition in Japan, a leading robotics country," Jiang said. He plans to hone his business skills in Japan, where customers are more demanding, before tackling the huge Chinese market.