On Sept. 17, Delivery Hero began operating in Japan through its Asia-focused unit, Foodpanda, starting with six cities, including Yokohama, Fukuoka and Sapporo, and more than 1,000 partner restaurants. Its competitors include Uber Eats and local companies.

"This is only the starting point for us. We want to really bring food delivery single city, eventually, in Japan," Jakob Angele, Foodpanda's Singapore-based CEO, told the Nikkei Asia. The company still has a lot of opportunities, Angele said, due to the relatively low penetration of online food delivery services in Japan.

Delivery Hero operates more than 40 countries and territories across Europe, Latin America, the Middle East and Asia under multiple brands. It reported a gross merchandise value of 5.1 billion euros ($6 billion) and handled 519 million orders in the first half of the year, making it one of the world's major food delivery platforms.

The company bought Southeast Asia-based Foodpanda in 2016 and entered more markets in the region. In the first half of 2020, Asia accounted for 43% of Delivery Hero's total GMV, with Malaysia, Thailand and Taiwan the major markets. Japan, its 13th market to enter in the region, could also become a large market for the company, Angele said. 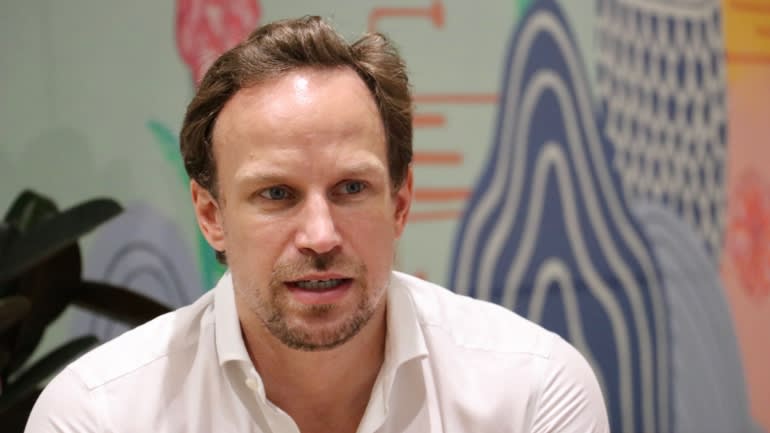 Foodpanda CEO Jakob Angele, speaking in Singapore, says Japan offers opportunities for growth as online food delivery has not yet caught on with many people there. (Photo by Kentaro Iwamoto)

The move into Japan is the latest step in Delivery Hero's Asian expansion. Grabbing a slice of the region's growing market is increasingly important as competitors are also aggressively moving in.

In Asia, the Chinese market is dominated by huge platforms like Meituan Dianping and Ele.me, an Alibaba Group Holding subsidiary. Other areas are less saturated and have more growth potential. "Asia is fast developing, and the consumers are very open to new ideas," Angele said. Delivery Hero's gross merchandise value in the region grew nearly two and a half times in the first six months of 2020 compared with the previous year. That was faster than other markets where the company operates. The business model of online food delivery companies does not vary much: They accept orders via apps, hire mostly part-time couriers and take a cut of around 30% from restaurants. Because customers often shop around for discounts, having more partner restaurants and gaining new users through promotions are typical growth strategies. That requires big investments.

Angele said one of Foodpanda's strengths is its combination of operational excellence and technology, which enables faster deliveries. In Taiwan for example, average delivery time is 18 minutes, he said. "With big data, we can optimize the routing and dispatching of orders."

Another differentiator is what it calls "q-commerce" or on-demand delivery of daily items from retailers such as convenience stores. Customers order items using the same Foodpanda app they use to order food from restaurants and get them delivered quickly. In Japan, for example, delivery time is typically around 25 minutes, the company said.

As it builds a presence in Japan and other markets, another key strategy for Delivery Hero in Asia is its planned purchase of Woowa Brothers. Woowa operates South Korea's largest food delivery app Baedal Minjok, or "Baemin," which has more than 10 million average monthly users. The deal, announced late last year, awaits regulatory approval.

Baemin has strengths in technology, which it uses to efficiently manage a huge amount of customer data. "We invested hundreds of billions won (hundreds of millions of dollars) in establishing our IT infrastructure," said a Woowa executive who asked not to be named. "This is not something our competitors can easily catch up on. We welcome challenges from other players."

If the deal goes through, Delivery Hero and Woowa management will set up a joint venture to operate the group's entire Asia business. "I and the Woowa Brothers management are ready to spread our Baedal Minjok brand, management skills and many food technologies that we introduced if a chance is given to us," Woowa founder and CEO Kim Bong-jin said in a note published by a local newspaper. It is unclear how Delivery Hero will reframe its Asia business. But assuming the acquisition goes ahead, it is sure to further cement its position in the region. Its aggressive expansion in Asia is also likely to bring tougher competition.

Other leading digital startups are doing the same. Singapore's superapp Grab and Indonesian rival Gojek have online food businesses in multiple countries in Southeast Asia, where both piggyback on their network of ride-hailing drivers to deliver food. Grab is expanding its grocery delivery business with partner retailers as well.

Japanese messaging app Line has the Line Man food delivery in service Thailand, which is a major platform in the country. Line Man in July announced it would merge with Wongnai, a local restaurant review platform, widening its services to reach more consumers.

In Asia, Delivery Hero reported a loss of 229 million euros for the first half of 2020 on an EBITDA basis. But Angele said the company will continue to invest in customer acquisition. "We are still in a phase where we prioritize much growth and customer acquisition" over profitability. He also said the company will look into services that have synergies with its logistics network. 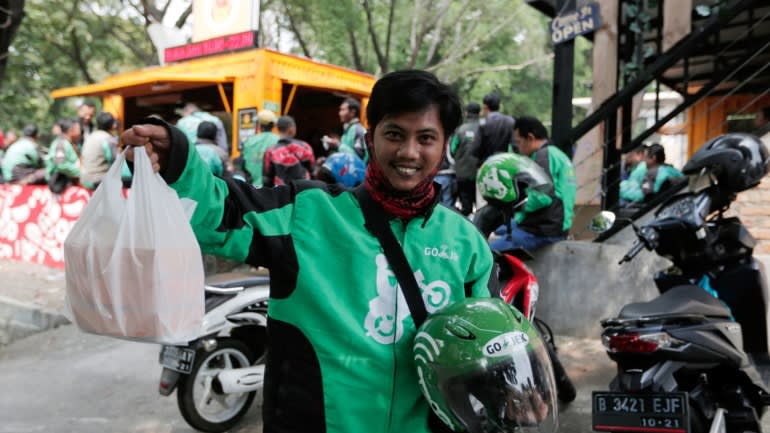 Local food delivery companies are battling it out across Asia. Indonesia's Gojek uses its network of ride-hailing drivers to bring food and other items to customers.   © Reuters

As the competition grows fiercer, one key strategy for food delivery operators is to team up with restaurants and retailers, according to Sabrina Asyarafi, a management consultant at YCP Solidiance, an Asia-focused consultancy. "Food delivery platforms must provide a clear plan for a sustainable partnership path, for example, by giving incentives when reaching a certain milestone [for] their business [on] the platform."

From the perspective of customers, another important strategy is personalization, Asyarafi said. Food delivery platforms "could give extra effort in predicting the demand-based market and generate strategy based on quickly shifting preferences, pinpointing based on geographical area, ... previous purchases frequency and categories, and consumer behavior."