Ko Nishimama, center, founder of job-placement service Shangri-La, says the "bandwagon jumpers have been weeded out," leaving only serious foreign students to apply for jobs in Japan.

SEOUL -- Ko Nishiyama, a former Japanese diplomat, has left government service, but not the international arena. These days, he is in South Korea pursuing a longtime dream of connecting young Asian job seekers to Japanese companies starved for talent.

In late 2017, Nishiyama was in Shanghai, training at the Japanese Foreign Ministry's China School, wondering whether he should press on with his diplomatic career.

Nishiyama had landed a plum job at the Foreign Ministry three years earlier, but he felt lost and frustrated during his first two years as a junior diplomat at the ministry's Asian and Oceanian Affairs Bureau. "I didn't have a real sense of achievement as a diplomat," Nishiyama recalled, exhausted by souring Sino-Japanese relations and endless disputes with South Korea over historical issues. His stint in Shanghai offered no clear sense of direction.

If he quit halfway through the training, Nishiyama would be on the hook for his tuition -- an amount equal to several years' salary.

Throwing caution to the wind, Nishiyama struck out on his own and started a business, raising seed money through a crowdfunding platform. Some of his friends and former colleagues generously donated more than 3 million yen ($27,300) to the venture, dubbed "Shangri-La" after the utopia depicted in James Hilton's novel "Lost Horizon." He and a partner ran the business out of a shared office in Seoul.

The idea behind Shangri-La was simple: Put young South Koreans in their 20s and 30s, many of whom have a hard time landing jobs, in touch with Japanese companies looking for motivated multilingual recruits. To connect job seekers with companies, Nishiyama came up with the idea of hosting job seminars. 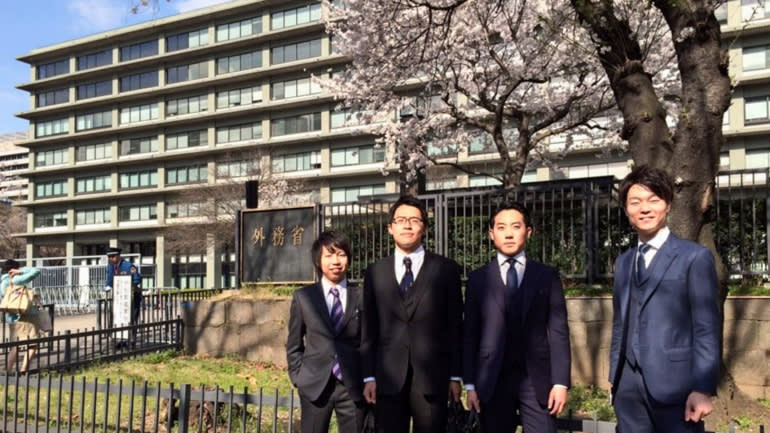 Japanese and South Korean companies have different hiring practices and criteria for recruits. Many South Korean students are rather nonchalant when applying with a Japanese company, assuming that landing a job will be relatively easy -- an attitude that sometimes leads to problems.

According to the Human Resources Development Service of Korea, about 1,800 South Korean students found jobs in Japan in 2018, up 30% from a year earlier. Nishiyama himself helped nearly 100 such students.

But things changed after Nishiyama's first recruiting season. Shangri-La's co-founder left due to a disagreement over the company's direction. The partners first met as interns at the Trilateral Cooperation Secretariat in Seoul, an international organization formed to promote peace and prosperity between the People's Republic of China, Japan and South Korea.

They both wanted to contribute to civic exchanges among the three countries, but their idealism was quickly upended by reality. The split left Nishiyama discouraged and uneasy.

Last summer, the traditionally prickly relations between Tokyo and Seoul became especially tense -- perhaps as bad as they had ever been since the two countries normalized diplomatic ties in 1965. The "No Japan" boycott of Japanese products ripped through South Korea after Tokyo tightened controls on exports of key products in July. Nishiyama slashed his job seminars by two-thirds last September, compared with 2018.

Although the number of South Korean students he sent to Japan also declined, Nishiyama was able to open offices in Beijing and Taipei last year. He also helped a number of Malaysian and Indian students find jobs in Japan.

Nishiyama has noticed that many South Korean students tend to quit their jobs with Japanese employers fairly quickly, finding it hard to adjust to Japanese corporate culture. The boom in South Korean job seekers and eager Japanese companies appears to have subsided, with both sides now appraising each other more coolly. "'Bandwagon jumpers have been weeded out, and only students who really want to land a job in Japan have remained," explained Nishiyama. "We have to establish a track record and solve problems."

In late January, Nishiyama was in Tokyo to interview South Korean graduates who had started working at Japanese companies. Among them was Kim Sae-in, 25, who participated in a study session organized by Nishiyama. Kim started working at a big Japanese financial services company last year. 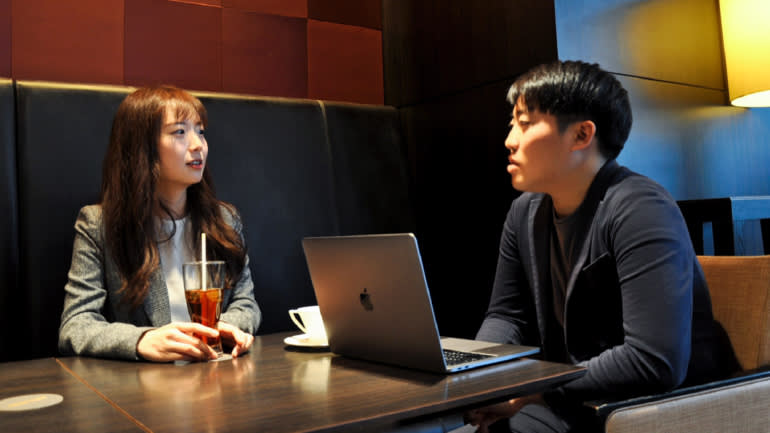 Nishiyama talks in late January with Kim Sae-in, a former client, about her experience working for a Japanese company.

At first she had trouble getting used to the company's elaborate paperwork and PowerPoint presentations. The cultural differences between Japan and her home also troubled the new recruit. "South Korean companies have many people who have studied or worked abroad, so I feel they are better able to adapt to different cultures," Kim said. "I get the impression that Japanese companies are somewhat more conservative."

Young people can also be turned off by low salaries at Japanese companies. Starting pay at Samsung Electronics -- a highly prized employer among South Korean students -- is said to be around 60 million won ($50,700) a year, much more than big Japanese companies typically offer.

In addition, many foreign graduates do not like companies assuming that new recruits are signing on for life.

Another challenge facing Nishiyama is that birthrates will decline and populations age even faster in South Korea and China than in Japan. These countries may offer a limited pool of talent for Japan. Nishiyama worries that Japanese companies are ill equipped to win the war for talent in Asia.

Having established a solid foothold in Seoul, Nishiyama has hired six employees in Tokyo, Beijing and Taipei. If he can get his main job-placement business on track, he plans to turn his attention to tourism.

"Annually, more than 50 million people travel back and forth between Japan, China, South Korea, Taiwan and Hong Kong, and the number is increasing," Nishiyama said. Setbacks such as the coronavirus outbreak are temporary. Deeper people-to-people ties will foster demand, he believes.

When asked how he feels about giving up his diplomatic career, Nishiyama is matter-of-fact: "I have no regrets. I want to try things that allow me to feel good, rather than [simply] pursue a career."