TOKYO -- Venture capital-backed funding of Asian fintech startups slowed sharply in the quarter through June, with deal numbers hitting a five-quarter low and deal value falling 93% on the year.

According to a recent report by U.S. market research company CB Insights, fintech funding deals in Asia dropped nearly 50% from a year ago, totaling 82 deals.

The total amount of funding, meanwhile, decreased to a little over $1 billion.

The decline on the year was mostly due to Alibaba Group Holding's payment affiliate Ant Financial raising $14 billion in its series C funding round back in June 2018. However, even when excluding the effects of Ant Financial, funding still fell close to 50% in the second quarter of 2019.

India, while also experiencing a drop in deal numbers, came out as the region's top market for the first time with its pullback being less severe than that of China.

The report points out that fintech deals and funding in Asia will likely fall short of 2018's record, mostly due to China's drop.

Financial consultancy KPMG says in its own recent fintech report, "Relatively quiet fintech investment activity in the first half of 2019 is in part a reflection of the significant maturation in China's payment sector, following two years of ongoing investment and mega deals."

"China's fintech market is unique," said Tracy Zhang, lead partner and head of tax transformation at KPMG China. "Baidu, Alibaba and Tencent dominate and are making acquisitions to try to cover all the major sectors. We therefore expect the minority market to see more participation from small and medium-sized fintech players." 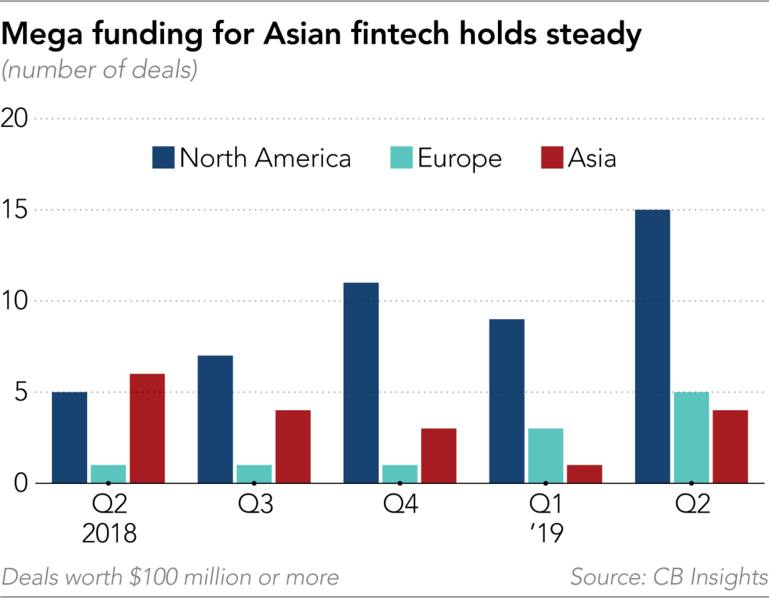 Meanwhile, the number of mega rounds worth more than $100 million remained steady, with Asia recording four deals. The previous quarter saw one while last year, there were six.

The mega rounds were largely to established fintech companies in the late stage.

Seven fintech companies reached unicorn status in Q2. There have already been two more in Q3 so far. Unicorns are private companies valued at $1 billion or more.

Most notably was Liquid, a Japanese fintech startup founded in 2014. Its parent company Quoine offers a range of fintech services, including a trading platform for cryptocurrency.

James Riney, founding partner and CEO of Coral Capital, a specialist in seed-stage funding, said, "The concentration of capital into a few outlier companies is normal, but it is especially pronounced now with SoftBank and the ripple effects of its Vision Fund."

The investment conglomerate and its near $100 billion Vision Fund have invested $66.3 billion into 81 companies by the end of June, roughly two years after it began its spending spree.

"Other firms have opted to increase their fund sizes in order to compete and have been able to given the great fundraising environment," Riney added. "Now that they have raised the capital, they are faced with the challenges to deploy. There are only a handful of companies that require that amount of capital, hence the concentration."

Nobuaki Kitagawa, managing director of CyberAgent Capital in Shanghai, made a similar point. "The fintech industry seems to have entered a stage where investments have been concentrated to certain companies rather than startups. ...When looking at Japan's payment industry, because fintech requires a long period of upfront capital investment, companies that cannot receive mega funding rounds tend to not survive."