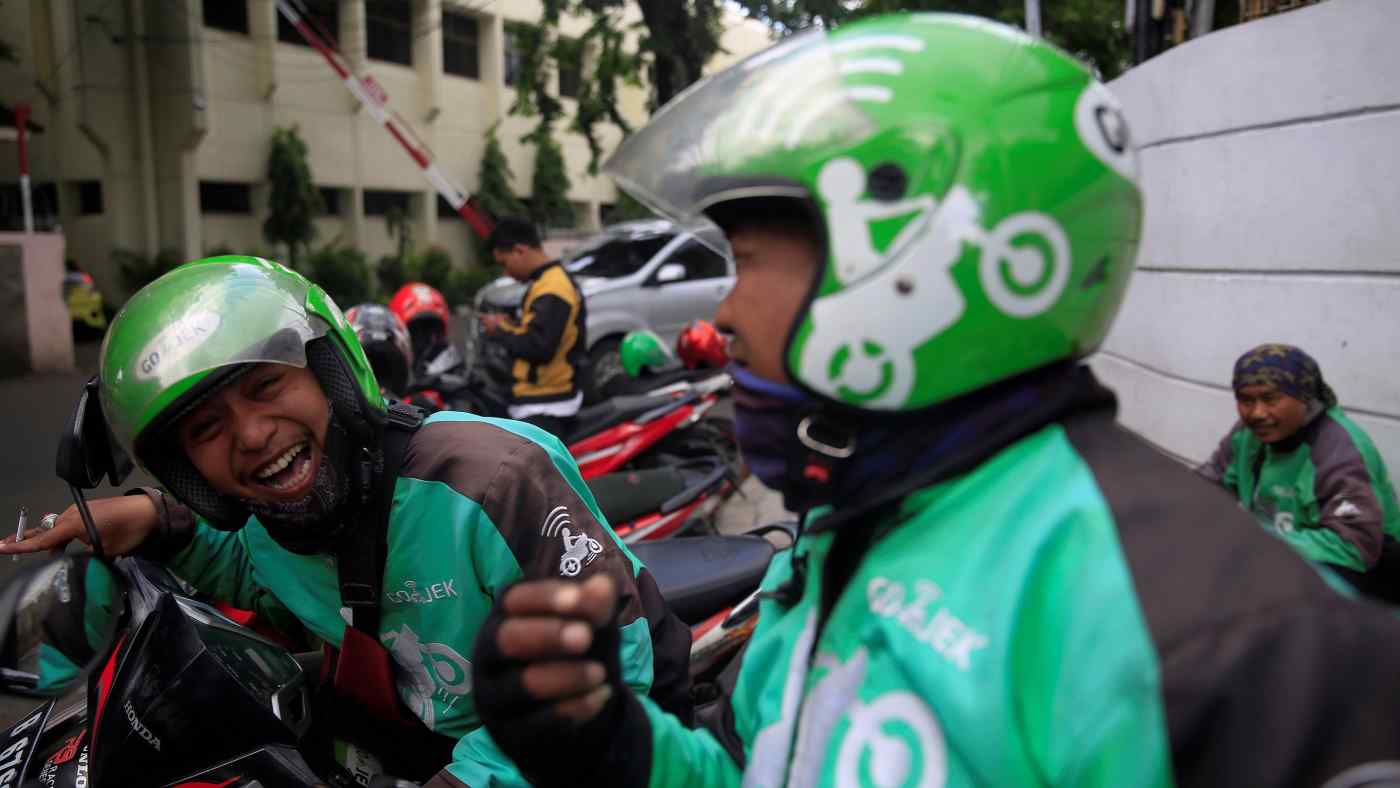 JAKARTA/SINGAPORE -- Grab and Gojek, the biggest on-demand mobility startups in Southeast Asia, face competing financial crosswinds as they navigate the coronavirus outbreak, spending millions of dollars to support their drivers with an eye toward the ensuing recovery.

Demand for rides has spiraled downward by double-digit rates, leaving drivers struggling to make a living.

Amir, who drives a motorcycle for Gojek in Indonesia, is having trouble paying rent, and he is considering moving or skimping on food.

Both Singapore, where Grab is based, and Malaysia have imposed stay-at-home orders. In Gojek's home country of Indonesia, President Joko Widodo urged residents to remain indoors. The capital, Jakarta, enacted stronger social restrictions last week, including a ban against ferrying riders on motorbikes.

The number of people ordering rides on Grab plunged 24% during the week ending March 26 compared with Feb. 22-28, data from Indonesia's Statqo Analytics show. Gojek fell 11% for the same period.

But instead of cutting costs and employees, the two companies are providing assistance to drivers.

Grab is offering drivers in Singapore a 30% discount on vehicle rental fees through May 4. Throughout Southeast Asia, the company is providing cash stipends to drivers infected with COVID-19 or who are forced into quarantine. The startup has spent nearly $40 million on such financial support.

Gojek in late March established a relief fund of 100 billion rupiah, or $6.38 million, financed in part by executives donating one-quarter of their annual pay. The fund will subsidize drivers in areas such as medical care and supplies.

The Indonesian company said April 7 that it will give 1 million coupons weekly, each worth 5,000 rupiah, to drivers in Jakarta for use at participating restaurants.

Grab and Gojek are going to these lengths to support drivers because they form the backbone of the services offered by the two startups, which span ride-hailing to home deliveries and digital payments.

Drivers often are the ones who convert cash into credit added to online account balances. Gojek drivers transport masseuses and cleaners to the homes of clients.

Gojek and Grab risk losing drivers if these workers do not receive sufficient relief during the downturn. Without drivers, the companies have no growth prospects.

In Singapore and elsewhere, Grab rents out vehicles to many of its drivers. If these drivers ceased business, the company would be saddled with fleets that are nonperforming assets.

Another factor at play is the heavy social pressure typical among Southeast Asian startups to maintain jobs. Gojek hires 2 million drivers in the region while Grab has a few million.

Both companies built their names on being job creators. Gig driving was already an unstable trade before the pandemic. Neither Grab nor Gojek can afford to turn their backs on drivers now.

Gojek co-CEO Andre Soelistyo told Reuters in late March that the company can expect a recovery "in the next few months." Supporting drivers puts the startup in strong position to capture the bounce in mobility demand. But current conditions render long-term projections uncertain.

Neither Grab nor Gojek discloses earnings, but their copious investments weigh against achieving profitability. The extra spending to deal with the coronavirus fallout hampers earnings further.

That qualifies Grab and Gojek as the top two startups in Southeast Asia in terms of fundraising. But the pandemic has upended the venture capital landscape. After realizing massive valuation losses for its targets, SoftBank decided to put a freeze on new investments.

With doubts swirling over Grab and Gojek's growth prospects, opportunities to raise funds could fade the longer the epidemic persists. Rumors of a merger also have emerged, though both companies deny it.