SINGAPORE -- Grab, the biggest ride-hailing company in Southeast Asia, is promoting a new service: selling financial products for small investors via its app.

The Singapore-based company has positioned its new micro-investment product, called AutoInvest, as a precursor to offering banking services in the city-state and other countries in the future.

Although Grab launched an online payment service just over four years ago, it already has turned into a key fintech service provider in Southeast Asia, becoming a symbol of the region's rapidly growing and potentially huge financial market.

"You see, investments across most of the banks or all wealth [management] providers have a minimum starting amount. And most of them are about 10,000 [dollars], which is not a small amount of money. The fees are high," said Chandrima Das, head of wealth at Grab Financial Group, at an online news conference held Aug. 4 to announce the launch of AutoInvest.

"But today, with the right use of technology and with the solution that we are launching, you start with one [Singapore] dollar (72 cents). You don't need a different mind space and hours of research -- product features, fee comparison, safety -- to do this," she said.

The new service will "automatically set money aside, with every eligible cashless transaction, into your AutoInvest balance," Grab explains."Examples of eligible purchases include rides taken with Grab, orders with GrabFood, GrabMart, etc."

While the contract can be canceled at any time, all money saved and added via investment can be spent on Grab services or at merchants accepting the GrabPay card, Das said.

AutoInvest is expected to invest in highly liquid corporate bonds. While the actual investment will be farmed out to major local asset-management companies -- UOB Asset Management and Fullerton Fund Management -- Grab expects it to earn returns of about 1.8% per year.

Investment will begin in Singapore in early September, and the fees "will work out to less than 0.45% per annum," the company said.

In addition to AutoInvest, Grab announced other services on the same day: a third-party consumer loan platform, a "buy now, pay later" service that can split payments into monthly installments or defer them to the following month, and quick cash to cover hospitalization costs.

All the services are available from small amounts and via Grab apps, doing away with complicated formalities. "Banking and finding financial solutions to meet your needs, either for your family or for your business, doesn't need to be a chore. It's something you should be able to do while sitting on your couch watching Netflix," said Ankur Mehrotra, head of lending at Grab Financial Group. 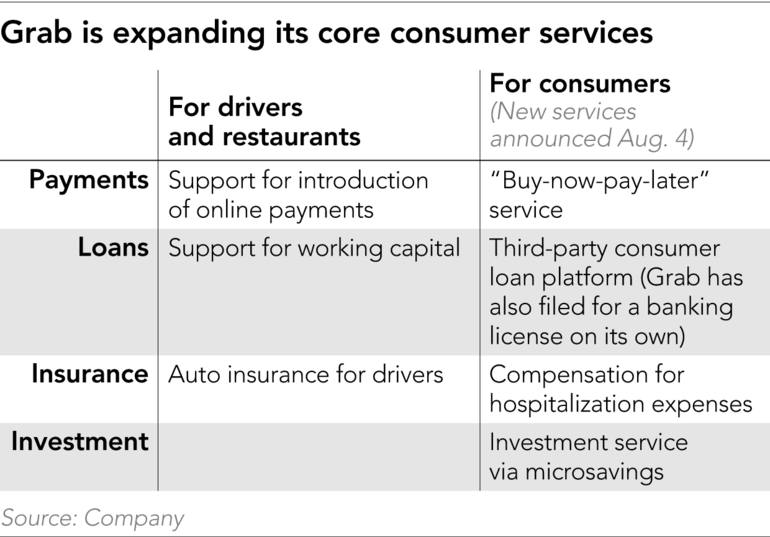 Grab was established in 2012 by Anthony Tan and Tan Hooi Ling, classmates at Harvard Business School, and now operates in eight Southeast Asian countries, including Indonesia, Thailand and Vietnam. Its ride-hailing app has been installed on more than 187 million mobile devices.

Grab has expanded its customer base through home delivery of food and necessities and reinforced its position as a "superapp," a single portal covering all aspects of daily life. As a result, the company's nontransport businesses now generate more than half of Grab's gross merchandise value.

The financial business launched by Grab in 2016 focused on e-money. After establishing it as a tool for cashless ride payments, Grab has steadily expanded its partnerships with merchants. The growing number of shops that accept Grab's payments has increased its share in the highly competitive online payment market in various countries.

Grab has been stepping up the expansion of its financial business from online payments to other sectors since 2019 while picking up know-how from major financial institutions, such as ZhongAn Online P&C Insurance of China and Citigroup of the U.S., through tie-ups. The financial business is now one of Grab's three core operations, along with ride-hailing and home delivery of meals.

Up to now, Grab has mostly offered financial services apart from online payments mainly to what the company calls "micro-entrepreneurs" -- the 9 million self-employed people working who perform services directly to customers, such as ride-hailing drivers and restaurant owners. Calculating the risks of default or accidents is relatively easy for these services, due to the availability of daily ride and sales data.

The Aug. 4 news conference shows Grab's resolve to grow further in the financial sector, suggesting a readiness to expand into the much larger consumer market.

"Many unbanked or underbanked Southeast Asians will be keen to enter financial markets for the first time, and being able to do so at very low cost and [with] little barriers will be a very attractive proposition. This will boost Grab's revenues," said Kenny Liew, a technology, media and telecoms analyst at Fitch Solutions.

That growth is expected to come from lending, investment and insurance. Payments and remittances, which accounted for nearly 50% of revenue in 2019, are forecast to drop to 20% in 2025 as fees come down due to stiffer competition among providers. 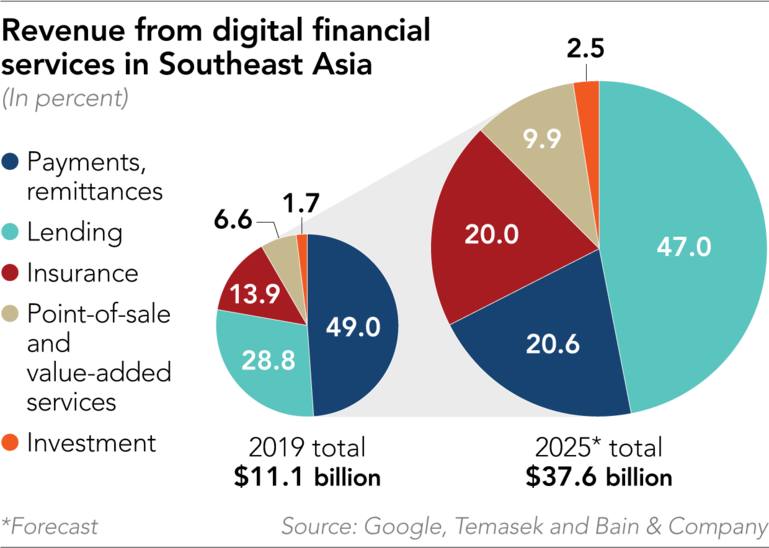 Because its current payment-centered business model will undoubtedly face flagging growth, Grab needs to promptly launch fully online lending and insurance services that will put it in a good position to battle for a slice of the digital financial services market down the road.

Even as the global economy shrinks amid the coronavirus pandemic, the digital financial services market keeps growing. Around 10% of GrabPay users between January and April had never gone cashless before.

According to a survey by U.S. consultancy McKinsey, 48% of consumers in Indonesia have increased mobile payments during the pandemic, while 31% of those in Singapore said they will continue using mobile banking services even after the pandemic ends.

The same survey found that Western Europeans who have cut back on mobile payments outnumber those who have increased them, suggesting that the shift to digital financial services may accelerate in Southeast Asia much faster than expected before the outbreak of the new coronavirus.

As the first step, Grab has filed for an internet-based banking license in collaboration with Singapore Telecom.

"A digital bank really does allow us to wrap everything or rebundle everything. That is the aim of getting a digital banking license," said Reuben Lai, senior managing director of Grab Financial Group, said. "With the digi-bank license, we're really not looking for just the Singapore launch. This is really the steppingstone for us to launch across the region." "We know that our research has shown that there is a real demand for the products we are launching. We believe profitability, sustainability would follow very nicely," Lai said in reference to Grab's strategy of securing a high market share before anything else.

One weakness is that Grab does not have a strong e-commerce site. Online game company Sea, which has a big e-commerce platform called Shopee that operates in countries such as Indonesia and Vietnam, has also applied for a digital banking license in Singapore.

Analyzing consumers' purchase histories on e-commerce sites is an effective way of recognizing their incomes and tastes, and proposing the types of loans or other financial products likely to appeal to them.

"We have built the largest digital ecosystem in Southeast Asia, partnering with over 600,000 online and offline merchants," Lai said.

But it is too early to say how far and how effectively Grab can utilize information from records of ride-hailing and meal delivery purchases, along with payment data at partner merchants, to offer loans to customers and screen potential borrowers.

"Over the 2016-19 period, $43 billion has been invested in SuperApps across ASEAN such as Grab, Gojek and Sea. How much more capital needs to be invested in ASEAN before healthy returns can be achieved? The answer ... potentially double what has already been invested," Mark Goodridge of Morgan Stanley's ASEAN technology/medical/telecom research said in a May report.

Grab does not have much financial leeway following the dismissal of 360 employees -- about 5% of its workforce -- in June as a result of weaker ride-hailing demand. With investors adopting a more skeptical attitude toward startups, Grab must raise funds to invest in its financial business until it can earn a steady profit.

Grab said it has achieved "robust growth across the region, with more than 13 million paid-for insurance policies issued since April 2019 when [it] launched [its] insurance business."

To companies wishing to gain a foothold in Southeast Asia, tie-ups with Grab are attractive because of its huge customer base. Grab has used this leverage to find more than 60 partners in its financial business alone.

Among Japanese companies, MUFG Bank will investup to $706 million in Grab by the end of this year to jointly offer smartphone-based financial services. Credit card issuer Credit Saison and others have also formed partnerships with Grab.

Grab has "is extraordinarily committed to growth" and moves into action at a speed inconceivable in Japan, such as "launching all services under consideration at the same time," said an official at a Japanese financial institution, noting that the institution's partnership with Grab has greatly accelerated its own in-house reforms.

Grab sets a high bar for forming tie-ups. If a financial institution fails to build a win-win relationship with Grab, it may turn to a rival offering more attractive terms for a capital or business alliance.