Grab vs Go-Jek: Duel of digital 'decacorns' escalates in Indonesia JAKARTA -- Singaporean ride-hailer Grab hopes the way to Indonesians' hearts is through their stomachs.

Grab is putting relentless pressure on its Indonesian nemesis Go-Jek, most recently with a revelation to the Nikkei Asian Review that it plans to raise another $2 billion from investors and use much of the money to promote digital payments and other services on Go-Jek's home turf. Over the last year, Grab has invested heavily in the food delivery business there, as the dueling ventures attempt to become the go-to apps for much more than just transportation.

This really is a clash of the titans: Go-Jek's valuation has reached $10 billion, according to CB Insights' just-updated ranking of unicorns, or unlisted startups valued at $1 billion or more. That makes it the world's 19th "decacorn" -- a startup worth over $10 billion -- and second in Southeast Asia behind only Grab, which is valued at $14 billion.

But as the two giants pour money into new projects, marketing and recruitment, there is a niggling doubt: How long can they keep this up?

"Indonesia is the largest market in Southeast Asia by population and a very important market for Grab," said Ridzki Kramadibrata, the president of Grab Indonesia. The nation of more than 260 million people "is also home to over half our [drivers and merchant partners] and we have invested over $1 billion in the country to date." A Grab driver picks up food for delivery at Grab Kitchen in Jakarta. The facility is a direct challenge to Go-Jek's Go-Food service. (Photo by Kentaro Iwamoto)

Last September, Grab opened a new front in its Indonesian offensive in an old, nondescript building hidden away in a corner of Jakarta. It's called Grab Kitchen, and it is aimed squarely at challenging Go-Food, Go-Jek's market-leading delivery service.

The 105-sq.-meter facility operates from 10 a.m. to 10 p.m., handling 200 to 300 orders a day. Consumers hankering for chicken skewers or a chocolate milk tea simply order through the Grab app. One after another, the company's motorcyclists -- who double as ride-hailing drivers -- dart in to pick up the meals and beverages.

Koni Chandra Kalyani, the 50-year-old owner of a popular fried chicken restaurant 1,400 km away in Makassar, opted to open her first Jakarta branch not in a mall or a central shopping district but at Grab Kitchen. The head of Grab's food delivery unit, Tomaso Rodriguez, told Nikkei that the company chose the location and tenants based on supply-demand data.

Koni's establishment had a strong track record in Makassar, filling over 500 daily orders through Grab alone.

Rodriguez called expanding the food business "a natural step" for Grab. For ride-hailers, it is an obvious way to extract more income from their existing driver networks and customer bases. It has been a full year since Grab acquired U.S. giant Uber Technologies' Southeast Asian operations last March. Since then, the Singaporean company has rushed to secure fresh capital and partnerships, raising $4.5 billion from regional and global investors. A large portion of those funds also went to Indonesia, where Grab first put down stakes in 2014.

Conquering Indonesia is a particularly costly endeavor because it is the only one of Grab's eight markets where it faces a strong homegrown competitor. A survey by market researcher ecommerceIQ in February 2018 found that 56% of Indonesians said they used Go-Jek the most, followed by 33% for Grab and 8% for Uber. But the Uber deal gave Grab a jolt of momentum, with the company saying its revenue in Indonesia more than doubled on the year in 2018.

Indonesians downloaded Grab's app 13% more than Go-Jek's in the January-March period of this year, according to app analytics platform App Annie. Across all markets, Grab's lifetime downloads exceed Go-Jek's by a factor of 2.4. So success in Indonesia would cement its regional dominance.

Anindita Kusuma, a 27-year-old Jakarta resident, said she uses both apps but leans toward Grab. "I used to be a loyal Go-Jek user, with a spirit of 'nationalism,' but now I prefer to use Grab because of the promotions and more beneficial e-payments," she said. Many Jakarta stores accept both Go-Pay and rival Ovo, both of which are pumping money into "cash back" campaigns to woo consumers. (Photo by Kentaro Iwamoto)

Signs of the e-payment battle can be found all over Jakarta's shopping malls. Stores display posters advertising the "cashback" campaigns of Go-Jek's Go-Pay and Grab's partner Ovo, the e-money service of Indonesian conglomerate Lippo Group.

Grab views partnerships like Ovo as critical to its Indonesia strategy, since they can help it penetrate markets that would be tough to crack alone. In early March, Grab announced a smart city project with another Indonesian conglomerate, Sinar Mas Group.

As Grab and Go-Jek jostle for Indonesian digital supremacy, they are also well-aware that ride-hailers are only as strong as their networks of drivers, mainly motorcyclists. Grab Bike Lounges are part of the company's newest driver-retention efforts.

Jakarta's second Bike Lounge, which opened in November, is a 1,000-sq.-meter space featuring a small cafe and a prayer room, along with a barbershop that charges only 15,000 rupiah ($1.20) for a haircut, well below local standards. Grab says about 300 to 400 drivers kick back there during the opening hours from 8 a.m. to 9 p.m.

"Drivers need to rest," said Richard Aditya, head of Grab's bike business in Indonesia. "They need a place to connect with other drivers as well. We see this as part of their welfare." He said welfare is increasingly important for convincing drivers to stay with Grab, and that the company intends to open the lounges across the country. The plan is to have five in the capital. Drivers rest at a Grab Bike Lounge in Jakarta. The company hopes to retain drivers by giving them places to kick back and connect with peers. (Photo by Kentaro Iwamoto)

The competition for drivers does not extend to high pay.

A 38-year-old Go-Jek driver said the most he made in a single day in recent months was about 300,000 rupiah, but it can be as low as 100,000 rupiah. Both Grab and Go-Jek drivers receive about 80% of trip fares plus performance incentives, and they are not tied exclusively to one platform.

Since drivers stand to earn about the same with either Grab or Go-Jek, the companies see welfare programs as essential for keeping them happy.

Go-Jek in 2016 launched a welfare package that includes insurance and financial planning support. The Indonesian player's wider array of services, like shuttling other workers to jobs, also means drivers have less downtime and could lead to more pay.

"We are going to take shares from untapped markets, not from existing markets," said Ryu Suliawan, Go-Jek's head of merchants. And as an Indonesian company, he said Go-Jek has a responsibility to meet domestic needs. "Our management team cannot escape from Indonesia. We have a responsibility for our home."

There are no signs that the competition will cool down anytime soon. Some of the world's biggest companies have skin in the game: Grab counts SoftBank Group, Toyota Motor and Microsoft as backers, while Go-Jek has Google, Tencent Holdings and JD.com on its side. 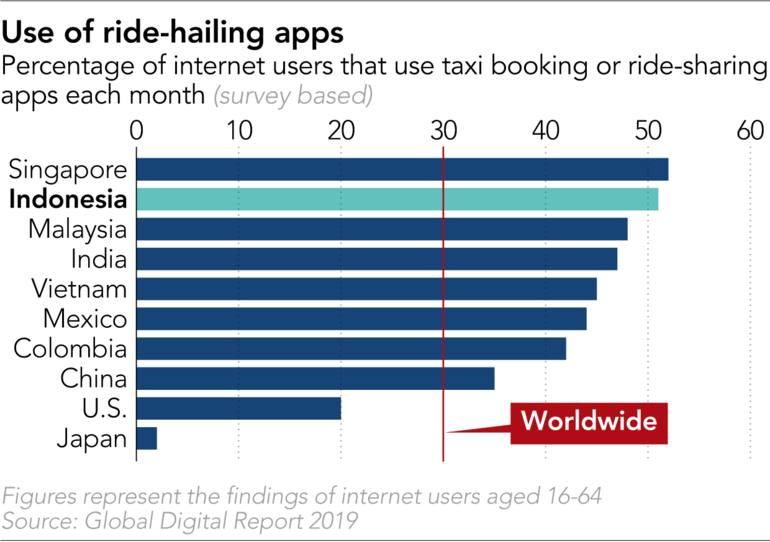 Yet, despite their immense and growing power, Grab and Go-Jek are not immune to risk. The Indonesian government in March said it would set minimum and maximum fares to support drivers' incomes without hurting consumers, potentially saddling the ride-hailing companies with higher costs. The decision came in response to driver complaints about low pay, which snowballed into public protests last year.

An industry watcher also warned the companies could end up hurting themselves with their aggressive and costly courtship of consumers and partners, including the e-money "cashback" campaigns.

"Grab and Go-Jek have been successful in developing their ecosystems very well," said Gervasius Samosir, a partner at consultancy YCP Solidiance in Jakarta. "However, there is a challenge when it comes to customers and their business partners," be they drivers, merchants or restaurants.

"Both Go-Jek and Grab are pouring money to maintain their loyalty," Samosir said. "This never-ending game needs to stop."