BANGALORE/NEW DELHI -- Bangalore-based startup Zinka Logistics Solutions aims to triple the size of its truck-hailing platform BlackBuck in less than two years following a recent round of funding that has brought the company to the brink of unicorn status.

BlackBuck connects shippers with trucks, much like Uber connects passengers with taxis, helping to streamline India's notoriously inefficient logistics industry. The platform has grown to cover 300,000 trucks in just three years, and the company aims to increase that number to 1 million by 2021.

To that end, Zinka raised $150 million in a Series D fundraising round in April, taking its valuation to over $900 million. This was the second tranche of funding from Accel Partners U.S., B-Capital, and Goldman Sachs. Sands Capital and International Finance Corp. have also invested in the company.

If Zinka's valuation surpasses the $1 billion mark, it will become India's 17th unicorn.

Founded in 2015 by two engineers and a business graduate with extensive experience in the supply chain business for corporates, Zinka is attempting to change the way logistics is carried out in the largest economy in South Asia through deep technology.

Shippers can book a truck with a click. BlackBuck matches the demand with available trucks and drivers in the area. The drivers then go to the pickup point, fill out the required documents and set off for the destination. Drivers are given 72 hours to complete the delivery and if they manage that on or before time, they receive incentives from BlackBuck.

Drivers are banned from night-driving and are penalized in case of theft. They also receive alerts about potential robbery zones.

Dalbir Singh has enjoyed a boom in his transport business based in Bahadurgarh near New Delhi over the last three years, thanks in large part to BlackBuck.

The number of trucks he owns has more than quadrupled from 30 to 132. The efficiency of his drivers and the utilization of his fleet have improved, helping the company's bottom line. "Earlier, trucks would travel 5,000-5,500 km per month. The average is now up around 7,000 km. It sometimes goes up to 9,000 km," Singh said.

The breakthrough can partly be attributed to the government's push to improve road infrastructure and the newly introduced Goods and Services Tax which enabled a smoother flow of goods between states by eliminating check-posts at borders. But the biggest contributor to the positive changes in his business is BlackBuck, he said. 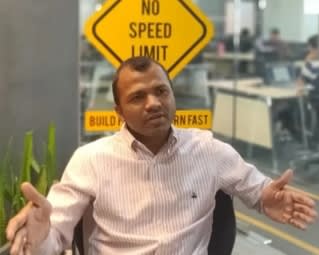 "We have removed intermediaries with direct contracts with truck owners, making the net earnings of owners increased," said Zinka co-founder and CEO Rajesh Yabaji. He added that while truck owners' income has improved 30%, the logistics cost of shippers has decreased.

Intermediaries in India include trucking agents who connect truck owners and clients, freight forwarders, loaders and unloaders. Shippers need to pay for each of them separately.

BlackBuck's operations originate from 400 industrial hubs and are spread across at least 2,000 locations. The platform charges a commission of 10-15% on every deal between shippers and truck operators.

Around 70% of Blackbuck's more than 10,000 clients are corporations, and the rest are small and midsize enterprises. The clients include some of India's biggest names, such as Reliance Industries, Tata Steel and Hindustan Unilever.

According to state-owned India Brand Equity Foundation, India's highly fragmented and disorganized logistics sector has been hampered by underdeveloped material handling infrastructure, bureaucracy, a lack of free movement for goods and minimal integrated IT infrastructure.

PwC Project and Infrastructure Leader Manish Agarwal reckons that improving efficiency in the logistics sector through technology and hard infrastructure can significantly lighten the burden on the economy. "The aim is to bring down logistics costs to 10-12% of gross domestic product from 14% now."

According to CARE Ratings, the logistics cost in BRIC countries -- Brazil, Russia, India and China -- as a percentage of GDP is 11%. In developed countries, the percentage is 8-9%, in the U.S. 9.5% and in Germany 8%. Tech startups in logistics, warehousing and fintech are seizing the opportunity to reduce the inefficiencies in the sector.

Yabaji who learned the ropes of supply chain at ITC, one of India's largest consumer goods companies, claims the company is already profitable at an operational level and hopes to draw a million trucks to BlackBuck in less than three years. "We still have not solved the problem," said Yabaji, suggesting the potential is still huge.

One potential competitor is a Gurugram-based startup Rivigo, which has just raised a $65 million Series E funding from SAIF Partners and Warburg Pincus, and plans to widen its network coverage. The other is a unicorn Delhivery, expanding its services to express parcel transportation and warehousing.

Yabaji, however, said his company had no competition, claiming that BlackBuck was the sole marketplace of its kind that directly connected shippers to truck operators. Indeed, many investors are counting on the four-year-old company's growth potential.

IBEF estimates that the logistics industry in India will reach $215 billion in 2020, growing 10.5% annually over five years. This rate exceeds that of the Indian economy as a whole.

To further smooth operations for truck owners and build an ecosystem around trucking, the company provides a credit card that drivers and truck owners can use for services such as tire repair, fuel, toll payments and insurance. It now wants to venture into vehicle financing through tie-ups with various commercial banks and non-banking finance companies.