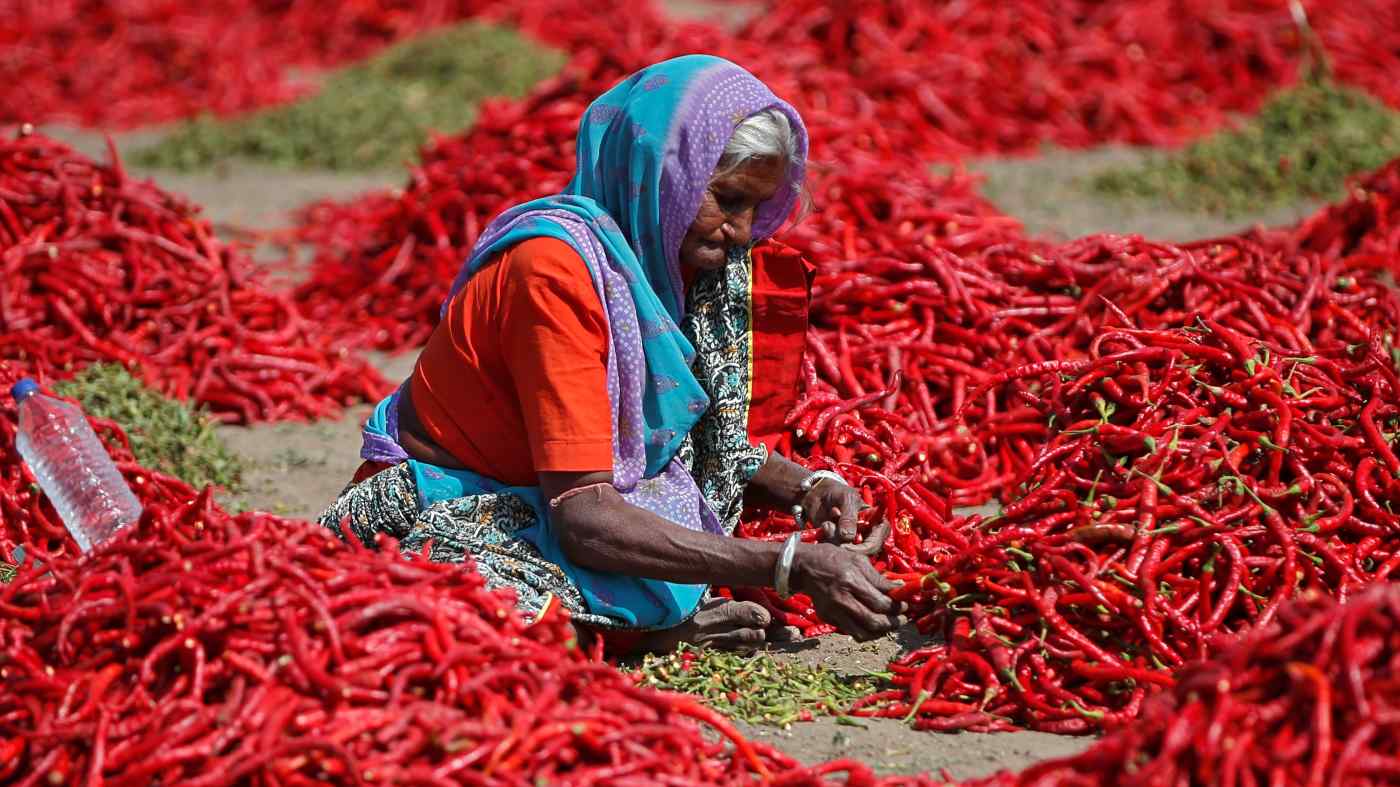 TOKYO -- Agricultural technology startups in India are driving the modernization of the country's outdated, fragmented and labor-intensive industry.

These companies are helping poor Indian farmers lift low productivity rates and ramp up income by marshaling cutting-edge technology including artificial intelligence. They offer a wide range of business support for farmers, such as providing advice on farming methods and strategies by using weather data and selling their crops directly to retailers.

The agritech startups are playing an increasingly important role in efforts to improve the livelihoods of farming families, which account for 60% of the country's population of 1.3 billion, and solve some key social problems in Asia's third-largest economy.

Agritech startups attracted $244 million of investment in 2019, a 350% jump from the previous year, according to Maple Capital Advisors, an Indian investment bank.

Sangamesh Tallikoti, a tomato farmer in Karnataka, a southern Indian state, is one of those who has benefited from his relationship with an agritech startup. The farm has managed to cut water consumption by about 60% just by following instructions from Wolkus Technology Solutions, which provides a farming advisory service called Fasal. 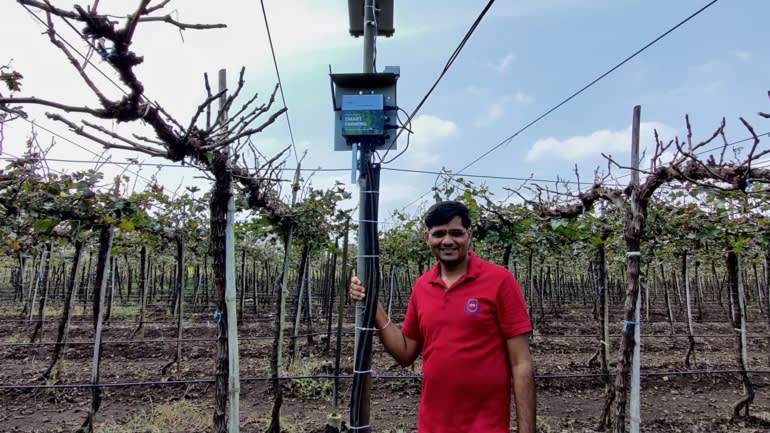 Wolkus Technology's agritech solution Fasal collects data for its advisory service from over 10,000 acres of farmland across four Indian states. (Photo courtesy of the company)

The AI-powered platform to support agricultural ecosystems sends daily instructions to the smartphone of the tomato farmer, such as how much to water and at what time.

The platform collects data, such as temperature and soil moisture, through sensors installed in fields, which are transmitted to the company's computer network. It then combines the information with local meteorological details for analysis by its AI systems, before feeding advice back to farmers. The Fasal app is used by some 1,600 farmers working more than 10,000 acres of farmland across four states, including Karnataka and western Maharashtra.

The vast majority of Indian farmers grow crops in small patches of farmland of 1 hectare or smaller. Such small plots account for some 70% of all farmland in the country. Yet many of these small-scale farmers are relying on old techniques and may even be growing crops that are not suitable for their land.

In 2016, Prime Minister Narendra Modi's government announced a target to double the income of farmers by 2022 by helping them to raise productivity. To realize this major goal, startups are expected to play a role in helping farmers.

ULink AgriTech, an agricultural startup based in Maharashtra, runs a call center that can address all farming related questions.

Staff at the company's call center in Pune, an industrial city in the state, handle a daily flood of questions from farmers and provide instructions via its smartphone app, AgroStar. 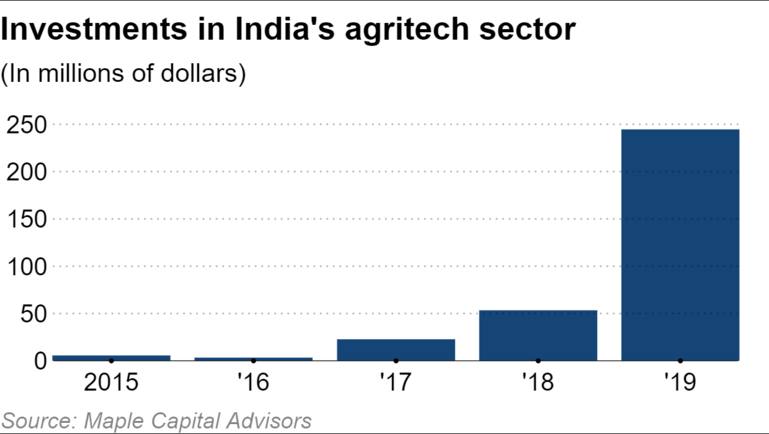 While the company does not charge for the information, it makes money from selling and delivering fertilizers and agricultural chemicals directly to farmers from its distribution centers.

This is a great service for many farmers who would otherwise have to travel far to buy fertilizers and agricultural materials since the country has no well-developed distribution network for such products.

"Our business model has done two things; it has added a direct impact on increasing the yield. Interestingly, it also had a direct impact on reducing the cost of cultivation," said ULink CEO Shardul Sheth. In 2019, the company raised $27 million to expand its operations nationwide within several years.

Meanwhile, Star Agribazar Technology is offering farmers a platform to sell to retailers, cutting out middlemen. Growers offer vegetables and fruit on the platform at prices they set and ship them in response to orders, with all transactions managed online and delivery provided by Star Agribazar.

One of the reasons why farmers in India struggle to make money is that middlemen in the supply chain often charge high fees and control the process. Star Agribazar's platform allows for quicker and cheaper supplies of vegetables and other farm products to retailers like supermarkets but at better margins for growers.

With a huge farming population and the widespread use of mobile devices, India offers business opportunities to agritech startups in a wide range of areas from production to distribution to financing, says Teruhide Sato, managing partner at a Singapore-based venture capital investment company Beenext.

India also provides a nurturing environment for startups. Some 9,000 new businesses were launched in the country in 2019, a figure behind only the U.S. and China, according to Nasscom, a prominent software service industry group in India. 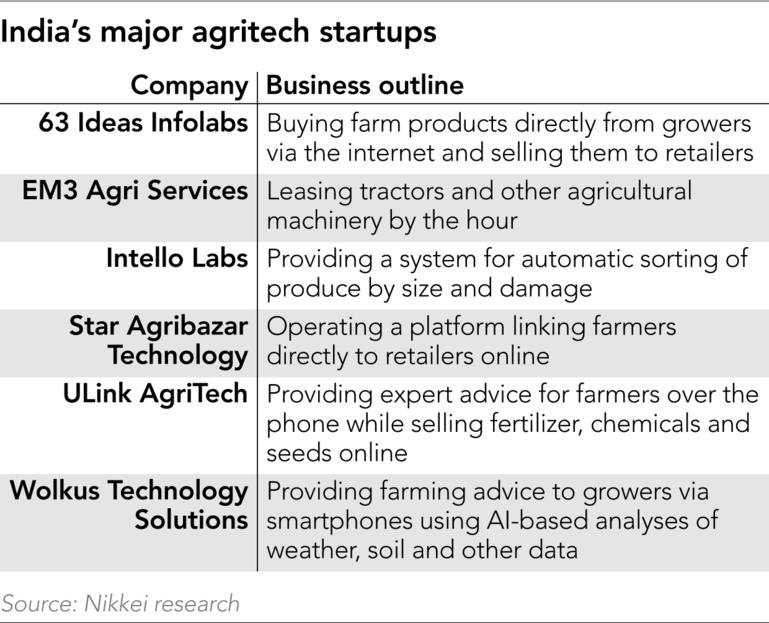