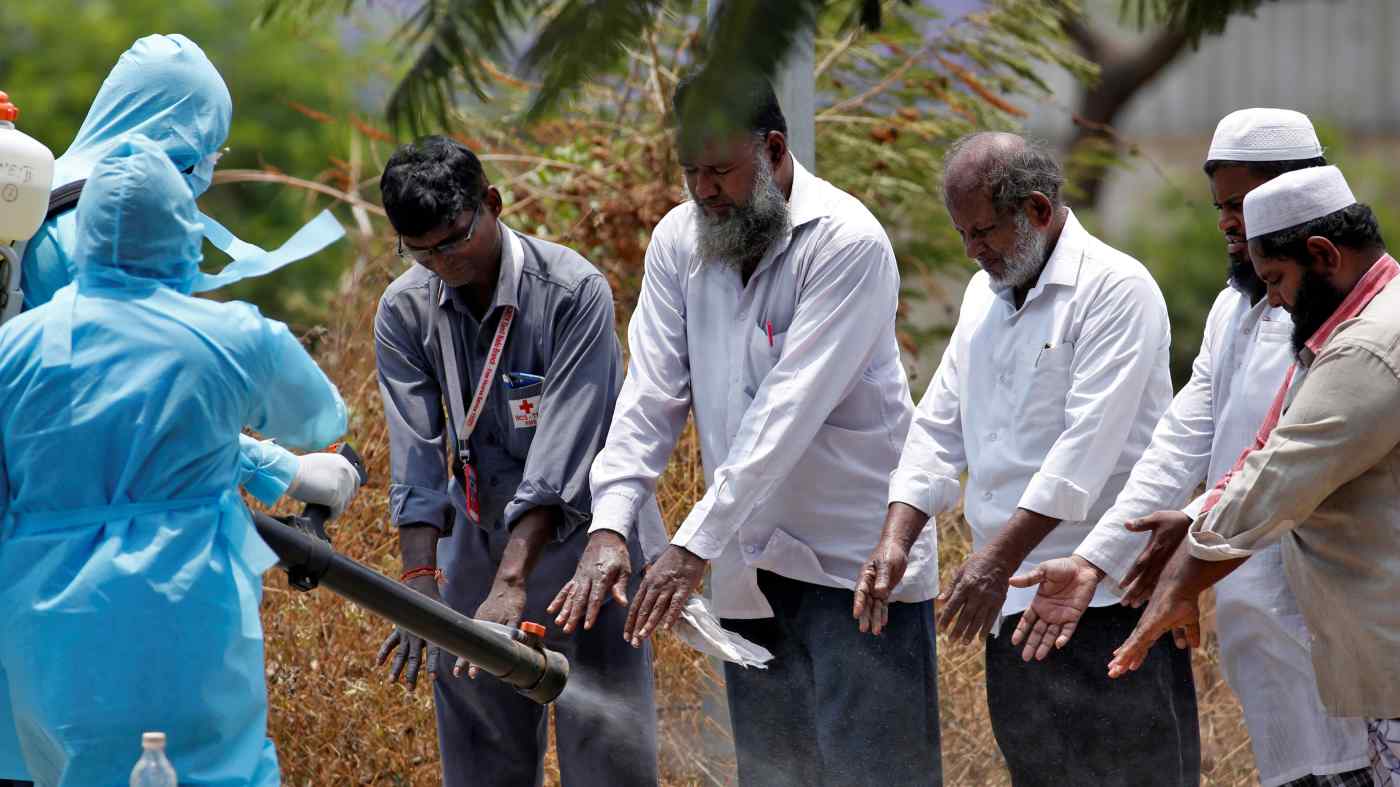 People sanitize their hands after burying one of their relatives who died due to COVID-19 in Chennai. India is under a nationwide lockdown to contain the new coronavirus.   © Reuters
ROSEMARY MARANDI, Contributing writerApril 15, 2020 12:29 JST | India
CopyCopied

MUMBAI -- A host of Indian medical startups are harnessing their technology expertise to help the country's 1.3 billion population, currently under a nationwide lockdown, to fight the novel coronavirus and contain the spread of the infection.

From solutions to shortages of critical medical equipment such as COVID-19 test kits and ventilators, to providing remote health monitoring, these startups suddenly find themselves at the forefront of the battle to get India through the pandemic, ramping up production and tweaking their existing technology to new ends.

"The country is passing through the unprecedented crisis, and this requires prompt remedial actions," said Commerce Minister Piyush Goyal during a video conference with startup executives earlier this month. He called startups "the harbingers of hope" and said they are playing an important role "for the future of the country."

Mylab, which is based in Maharashtra state and specializes in making screening kits for blood banks and hospitals, said it was increasing capacity of its COVID-19 screening tests to 2 million tests per week, from 150,000 a week currently.

The production hike comes after Mylab received financial support from Adar Poonawalla, chief executive of vaccine manufacturer Serum Institute of India, and Abhijit Pawar, chairman of investor group AP Globale. The details of the financial support have not been disclosed.

"The shortage of testing kits [in India] will come to an end in a month or two," Poonawalla was quoted as saying by local media. Mylab is increasing capacity of its COVID-19 screening tests to 2 million tests per week, from 150,000 a week currently. (Photo courtesy of the company)

India's Ministry of Health and Family Welfare has confirmed 9,152 coronavirus cases and 308 deaths as of April 13.

By its own estimates, India ranks as one of the lowest in the world in terms of tests carried out per million of its population, with the number as low as 6.8 per million. Countries like South Korea have been trying to contain the spread of coronavirus by doing increasing amounts of testing. India had been importing testing kits from Germany due to the absence of local solutions.

Mylab has now been approached by countries across the world, including neighboring South Asian countries, for its test kits, the startup's director of medical affairs Gautam Wankhede said in an email response to the Nikkei Asian Review. He did not reveal the names of the countries or say whether the company would supply to any of them, but said: "We are focusing on India right now."

According to data provider Traxcn, there were as many as 3,303 health care-related technology startups in India as of September 2019. A number of these companies hope to demonstrate their abilities in the fight against coronavirus to drive their future growth.

Another startup that has an important solution for the South Asian country is Biodesign Innovation Labs, a maker of affordable ventilators. The Bangalore-based company is offering to license its portable mechanical ventilators to any company that wants to produce them on a mass scale. The license would be nonexclusive and in the form of technology and knowledge transfer, it says. 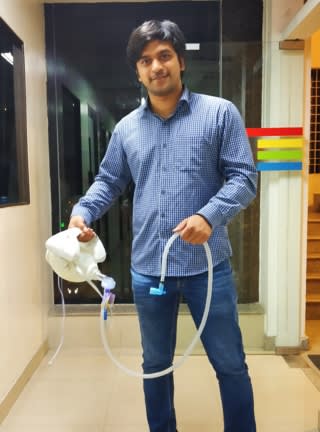 "We have already licensed it out to [ophthalmology devices company] Remidio and we are in talks with some other big companies," said Gautham Pasupuleti, CEO and managing director at Biodesign. "Our goal is to manufacture 50,000 plus ventilators in the next one to two months. So far, we have manufactured less than 100." This is due to its limited production capacity, with less than 20 people thus far engaged in manufacturing the respiratory device.

Meanwhile, Delhi-based AgVa Healthcare has partnered with Maruti Suzuki India, Japanese automaker Suzuki's local subsidiary and India's top car manufacturer, to produce ventilators. Maruti will use its own parts suppliers to get hold of ventilator components and ensure production in high volumes. "The intention is to reach a volume of 10,000 units per month," the company said in a statement.

According to some industry estimates, India has some 40,000 ventilators at present. According to the Brookings Institution, the country's need during the current health pandemic could shoot up to 100,000-120,000.

Bangalore-based startup Turtle Shell Technologies last week distributed some 250 of its Dozee small health monitoring devices to locals free of charge. "Our devices can help quantify which sets of people should be tested first," said Mudit Dandwate, CEO and co-founder of the company. Dozee, developed by Turtle Shell Technologies, captures micro-vibrations produced by human body. The signals are converted into biomarkers by the AI-driven analytics engine. (Photo courtesy of the company)

Dozee is a thin sensor sheet that can be placed below a mattress. When someone lies on the mattress, the sensors capture micro-vibrations produced by every heartbeat, inhalation, exhalation, muscle twitch, tremor or body movement. The signals are transmitted and then converted into biomarkers by the artificial intelligence-driven analytics engine.

Niramai Health Analytix, a startup which developed technology to detect the early signs of breast cancer by using a high-resolution thermal imaging device and AI for analyzing these images, has started to approach companies to help it deploy its solution for the detection of fever and respiratory issues, which are often seen in COVID-19 patients.

"We have good expertise in thermal analysis [and] we wanted to rise to the [current challenge]," said Geeta Manjunath, co-founder and chief executive of Niramai.

Despite the ambition and will of these startups, PwC India heath care leader Sujay Shetty believes that one of the challenges they could face is production constraints. As they are young companies, their manufacturing capacity could be limited. Getting a sufficient supply of components at a time when the country is under lockdown, could be another barrier, he adds. "These solutions are great, but they are not proven at scale," he said.