MUMBAI -- A startup is fast becoming the driving force of India's cosmetics market by absorbing demand from young consumers who buy affordable items on e-commerce platforms.

Cosmetics retail platform Nykaa has teamed up with L'Oreal of France to provide a virtual makeup try-on service via smartphones.

"I've been shopping on Nykaa for some eight years. It doesn't sell counterfeit brand goods like other websites often do," a woman in Mumbai said.

Run by FSN E-Commerce Ventures, founded in 2012, the platform offers more than 3 million items from 4,000 brands, ranging from lipsticks to skincare products. It obtains authentication from suppliers and conducts unannounced inspections of their warehouses to improve credibility and gain wider support from consumers.

Nykaa has 100 brick-and-mortar stores, but e-commerce is its main business. It has also built a word-of-mouth website where customers can post product reviews. An official of FSN E-Commerce Ventures said traditional face-to-face retail fails to address issues for consumers. "Consumers often find their desired products to be out-of-stock at stores, and are restricted to choosing from limited products due to space constraints in stores. Beauty and personal care brands struggle to have a wider consumer base and reach pan-India consumers." 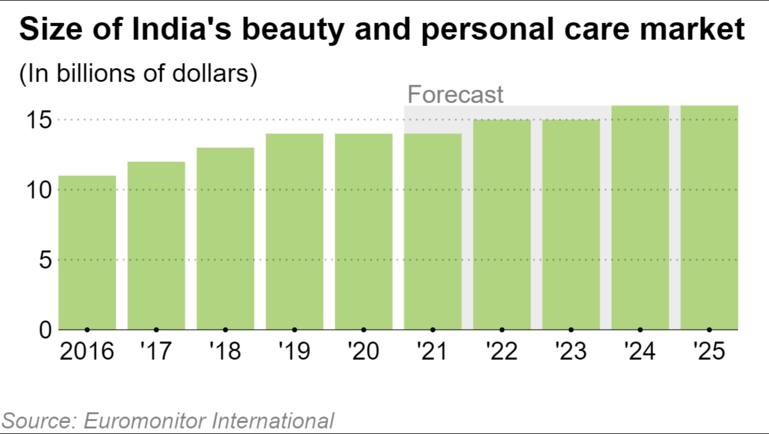 Smartphone ownership is rising in India due to low fees for telecom services, boosting the number of users of online services. E-commerce accounted for 2% of the Indian cosmetics market in 2016 but the percentage rose to 8% in 2020, according to local consultancy RedSeer Management Consulting.

In a country where the average age of the population is less than 30, being able to access young people directly is key for companies seeking to develop a large consumer market. Nykaa is concentrating its efforts on attracting the young "smartphone generation." Under the Nykaa Affiliate Program, influencers introduce products on social media such as Instagram and WhatsApp and in return receive a portion of that product's sales.

The platform also uploads videos to the Nykaa TV stream on its website and YouTube, teaching people how to use cosmetic products. In December 2021, it announced a collaboration with L'Oreal to provide the French company's artificial intelligence-based service allowing consumers to 'try out' makeup virtually on their smartphones. As of 2021, Nykaa had collaborated with more than 3,000 people, including influencers and Bollywood celebrities.

The company debuted on a domestic stock market in November 2021, raising 53.5 billion rupees ($704 million). Its group sales between April and December 2021 stood at 28.1 billion rupees, up more than 60% from a year before. Other companies are also gearing up to benefit from growing online opportunities. Local media have reported that the operator of Myglamm, an e-commerce and beauty information website, raised 11.1 billion rupees in 2021, joining the ranks of unicorns -- private companies valued at $1 billion or more.

"Compared to Japan, modern retailing in India was underdeveloped and mainly consisted of mom-and-pop stores. However, with the pandemic, EC has spread rapidly." Munehiko Eto, managing director of DIAI India Private Limited, a local unit of Dream Incubator, told Nikkei.

The rivalry between established e-commerce groups and startups is becoming more apparent. Leading e-commerce provider Flipkart, a unit of U.S. retail group Walmart, said recent sales of its cosmetic products doubled on the year, according to local media reports.

With a population of more than 1.3 billion, India's cosmetics market is expected to continue growing. British market research company Euromonitor says the Indian cosmetics and personal care market in 2020 was worth $14.1 billion, having grown 30% from 2016. The value of the market is projected to exceed $16.9 billion by 2025.