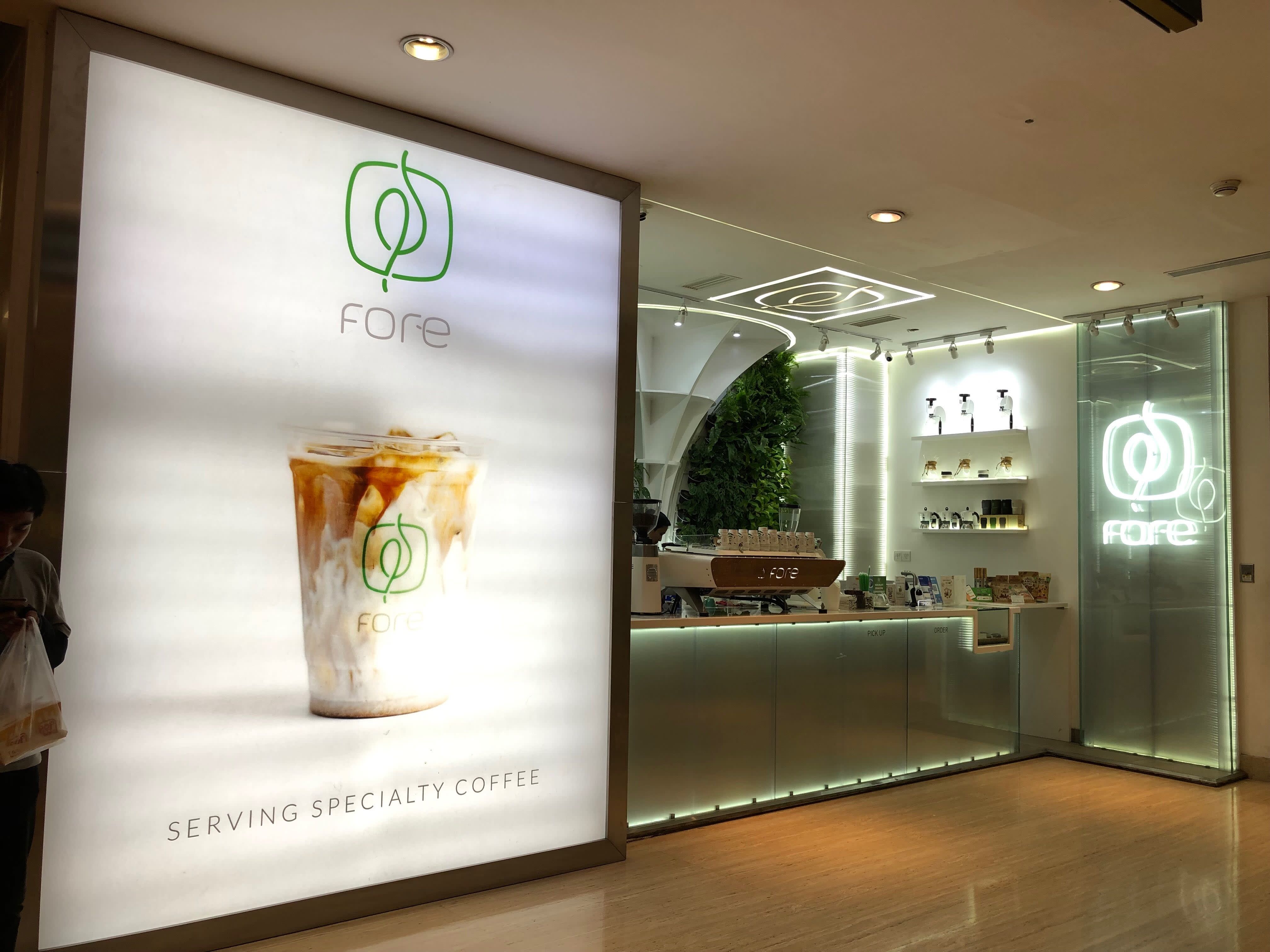 Although a coffee at Fore is priced at $2.50, customers are given an array of discounts and rarely pay full price. (Photo by Ismi Damayanti)
SHOTARO TANI, Nikkei staff writerAugust 20, 2019 15:42 JST | Indonesia
CopyCopied

JAKARTA -- The world's fourth largest coffee producer is experiencing a java boom all its own. Premium cafes have popped up across the Indonesian archipelago, perhaps enticed into the market by the long lunchtime lines at Starbucks stores in plush shopping malls.

Kopi Kenangan and Fore Coffee, startups backed by venture capital, intend to turn the boom into a full-blown culture by offering quality yet affordable specialty beverages to the country's rising middle class.

Indonesian coffee consumption rose 26% in the five years to 2018, according to U.S. Department of Agriculture. But the market has a large gap between the lower-end instant coffee available at mom and pop shops and the espresso concoctions sold by the likes of Starbucks, said Edward Tirtanata, founder of Kopi Kenangan.

"Instant coffee could be like 1,000 rupiah," Tirtanata said, "and chain coffee that offers better quality than instant could be like 40,000 rupiah. There's nothing in the middle, and that's what we're aiming at, affordability."

The premise is the same at Fore Coffee. "There's no decent coffee you can get easily [at an affordable price]," co-founder Elisa Suteja said.

Fore's 35,000 rupiah ($2.50) price per cup is higher than Kopi Kenangan's 18,000 rupiah, but customers are given an abundance of discounts and rarely pay full price.

VCs find themselves drawn to these startups by the potential of high margins from an asset-light "grab and go" model similar to that of Chinese startup Luckin Coffee, which is now listed on the Nasdaq exchange in the U.S. 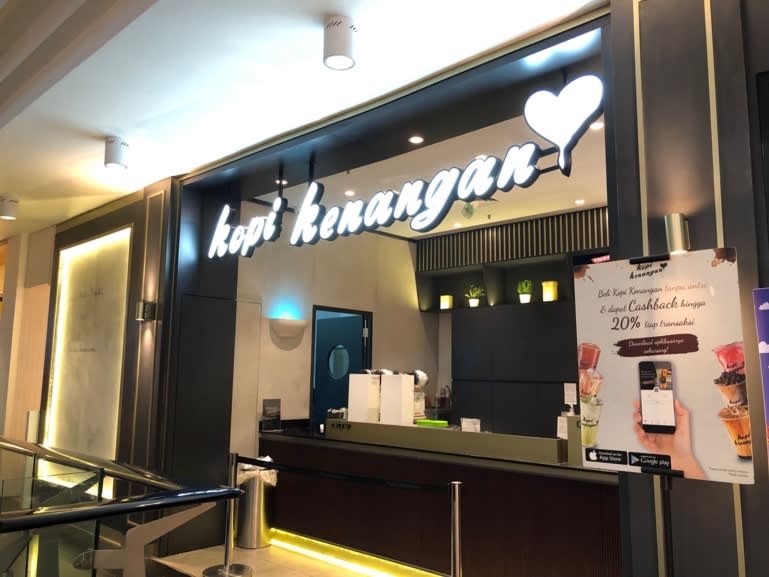 Kopi Kenangan has raised a total of $28 million from Sequoia Capital. (Photo by Ismi Damayanti)

To keep operating costs at a minimum, most stores take the shape of kiosks, with little or no seating. Customers can order through dedicated apps that often provide discounts and a way around long queues. Customers ordering via the app can also choose to have their beverages delivered by Go-Jek or Grab, Southeast Asia's battling super apps that provide a range of services. Payments can also be made via Grab's or Go-Jek's digital wallet services.

Kopi Kenangan and Fore use Indonesia-produced and roasted beans, which allows for further cost reductions.

In Indonesia, instant coffee is guzzled by lower income people, while high-end brews like those available at Starbucks are mostly enjoyed by the well off. Now the potential of a daily coffee brand for the country's swelling ranks of middle income consumers is also playing a role in attracting prominent VCs. Kopi Kenangan has raised a total of $28 million, of which $20 million came from Sequoia Capital. Fore, which began as a project incubated within early-stage-focused East Ventures, has raised $9.5 million in a Series A led by East Ventures and joined by the likes of SMDV, a corporate VC that is part of the Sinar Mas Group.

With digital payments and delivery infrastructure in major cities taken care of by Grab and Go-Jek, "the next question is what kind of category" to put on top of the infrastructure, said Melisa Irene, principal at East Ventures. Coffee was a good choice due to its high-margin potential. "If it is done right," Irene said, "we can at least get a user to [buy] it five times a week, compared to e-commerce, where 10 transactions per year is considered good."

Irene also said Luckin Coffee's successful IPO -- shares have generally been trading above the $17 price they were offered at in May -- shows that there is an exit for any food and beverage business. It also offers "increased confidence in many people interested in investing in the sector," the East Ventures principle said.

Kopi Kenangan was founded 2017, Fore showed up a year later and each has been on an expansion tear. Kopi Kenangan has 94 stores across Indonesia with plans to increase the total to 150 by the end of the year. Fore has 72 and is planning for 135 by year end. 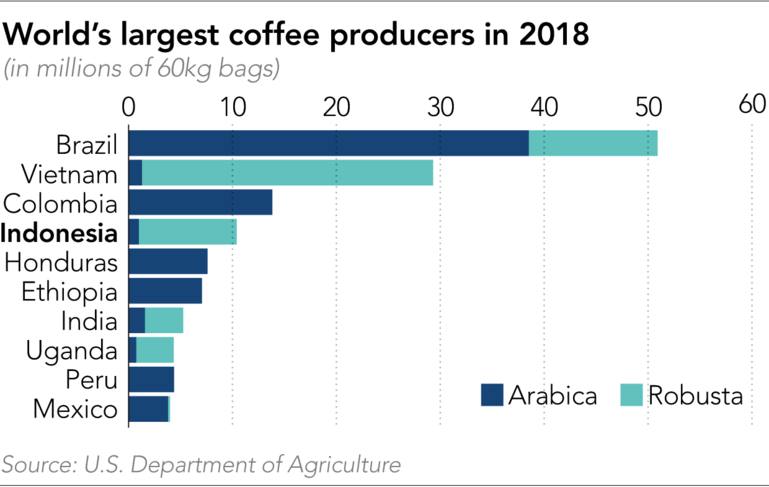 Fore said it utilizes data that its platform collects to understand customer menu preferences as well as find out where best to open new outlets. "We want to know where our customers are," Suteja said. "We don't want to just open a store anywhere. We want to be able to open a store in a place knowing that our customers are around the area."

In this respect, Suteja said the company's data collection has proved to be a "powerful" tool.

Coffee in Indonesia goes back hundreds of years, with seeds being introduced in the early 1700s as the Dutch sought suitable land to meet rising demand back home. By the turn of the century, Java had become the largest source of high-quality Arabica beans for the European market. But after a rust plague wiped out much of the crop around the 1880s, West Java's arabica trees were replaced with a species called robusta, which is more resistant to disease but lacks the complex flavors of arabica.

In 2018, only 10% of Indonesia's coffee production was of the more aromatic arabica.

Fore believes that by using 100% Indonesian arabica and creating more demand for the pricey beans it can help local farmers improve their livelihoods. The hope is that such a story resonates with Indonesia's rising middle class and convinces urbanites to stay with the brand, with or without discounts.

"The idea is that if [Fore] can create demand domestically [for arabica] through a domestic retail brand, then it becomes not only about the cup of coffee but the story behind it," said Irene of East Ventures. "As a consumer, you are able to help the smaller economy, smaller farmers."