JAKARTA -- E-commerce has been one of the few industries able to weather the coronavirus pandemic, as people stayed home and ordered more things online.

Despite that and with COVID-19 still wreaking havoc across the country, Bukalapak -- one of Indonesia's leading e-commerce platforms -- is sticking to its strategy of expanding its mom and pop kiosk business, according to CEO Rachmat Kaimuddin.

"E-commerce is still a very small percentage of retail transactions in Indonesia, around 3% to 5%," Kaimuddin, who became CEO in January, told the Nikkei Asian Review.

He added that "people are still not comfortable transacting online [and] still like to pay face to face ... They like to buy from neighbors, mom and pop kiosks." Bukalapak was founded in 2010 and grew to become one of Indonesia's leading online marketplaces, primarily for small and midsize enterprises. In 2018 it achieved unicorn status, a private company with a valuation over $1 billion. Investors include Singapore's sovereign wealth fund GIC, Alibaba's financial arm Ant Financial and venture capital 500 Startups.

The company ventured into offline retails in 2017 when it launched "Mitra Bukalapak," an app for mom and pop kiosks. The platform serves as a business-to-business marketplace where shop owners connect with consumer goods companies to replenish stock.

The coronavirus has pushed a lot of retail activity online, with offline sales in Indonesia plunging 16.9% year on year in April and 20.6% in May. But Kaimuddin still sees value in the offline channel, especially with the country's mom and pop stores.

Bukalapak itself recorded a double-digit increase in transactions compared with last year during the Islamic holy month of Ramadan, which ended in late May, according to Intan Wibisono, head of corporate communications.

CEO Kaimuddin stressed that he will continue the "two-way" strategy, saying "the kiosks are very important for Indonesian society, and both offline and online are required" in the COVID-19 era. 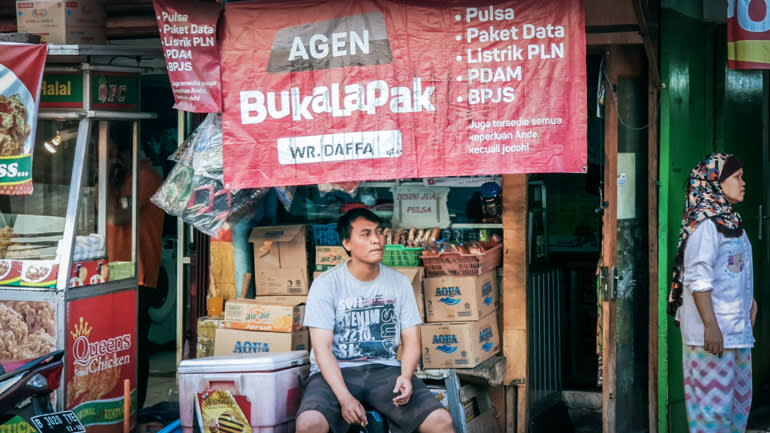 The company has around 1.5 million merchants on Mitra Bukalapak across 189 cities and regencies in 34 provinces, even in remote locations like South Halmahera near West Papua -- an arduous task given the need to partner with different distribution centers and have people on the ground signing up kiosks.

But Heru Sutadi, executive director at Indonesia ICT Institute, believes Bukalapak needs to be selective when signing up mom and pop stores in order for the business to become profitable.

"On a given road, do all [mom and pops] need to be made partners?" he said. "Perhaps Bukalapak can take the strategy of allowing one store to provide only phone credits and another only electricity payments."

In the online world, Bukalapak continues to face stiff competition from bigger, better-funded rivals, who all want a slice of Indonesia's $20.9 billion e-commerce market.

According to research company iPrice, Shopee, the e-commerce unit of Singapore's Sea Group, was the most frequently visited platform in the first quarter followed by fellow unicorn Tokopedia, a company backed by Japan's SoftBank Group. Bukalapak ranked third.

Kaimuddin is not overly concerned. "Some say 'winner takes all,' and in some sectors of tech that is the case," he said. "But in e-commerce, the market is so huge, people will typically have their own preference."

Industry insiders agree, feeling there is not a significant customer overlap between platforms. One said Shopee is for young women while Tokopedia caters to men. Bukalapak's customers come to the platform to "look for hobby goods, such as bicycles or automotive parts."

"We have our own segment ... The focus for me is to execute our strategy, and the numbers show we are on the right track," Kaimuddin said.

While the strategy may be to stay the course, Bukalapak is going through a major transition. After Kaimuddin replaced founder Achmad Zaky, who had been CEO from the start, fellow co-founders Nugroho Herucahyono and Fajrin Rasyid also left the company, making Bukalapak the first Indonesian unicorn to see all its founders leave. 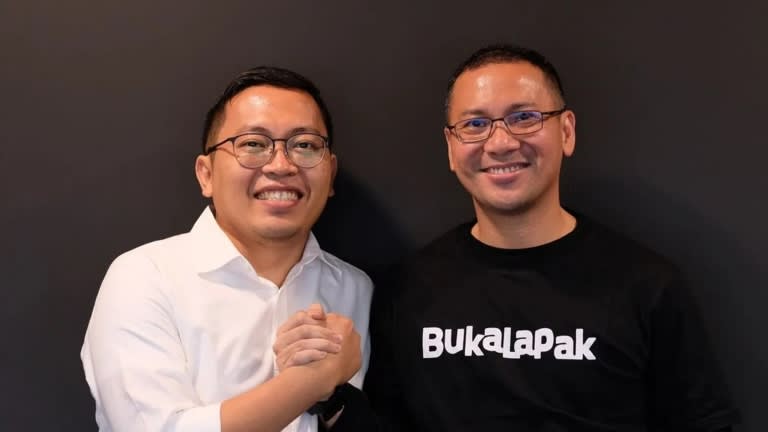 Bukalapak founder Achmad Zaky, left, was replaced by Kaimuddin in January. The company now is the first Indonesian unicorn to see all its founders leave. (Photo courtesy of Bukalapak)

Kaimiuddin's arrival in January is part of a big transition for one of Indonesia's first unicorns. The company is on its path to become a more mature company, where the new CEO -- a former banker -- is emphasizing stable cash flow and profits as well as growth.

"I believe [the founders] thought that for the past ten years they had been growing this company, making it into a unicorn," Kaimiuddin said. "But then it reached a certain point where they needed some people with experience and ability to run a big organization."

Bukalapak is now "a ten-year-old company with hundreds of millions of users, a lot of transactions, thousands of employees," he said. "It's a relatively big organization, [the kind] with which I am quite familiar."

Ignatius Untung, chairman of the Indonesia E-commerce Association, believes the transition was the result of investor demand. He said that investors are now wanting more "sustainability and growing with the development of innovations [already at hand]," something that the new CEO, with his background in a more established business, is better equipped to achieve.

Kaimiuddin said he does not have any near term plans for layoffs, but the company needs to be efficient and care more about the bottom line, as opposed to numbers like gross merchandise volume, a metric often used among e-commerce companies.

The CEO said he will push ahead with plans to "reach positive cash flow ... while having healthy growth." Bukalapak had already taken steps even before Kaimuddin's arrival: It laid off almost 10% of its 2,000-strong workforce in September last year.

Half a year into his tenure, Kaimuddin sees similarities between banking and e-commerce. Both are "intermediary businesses matching two parties. For banks, it's credit and funding. For Bukalapak, it's buyers and sellers."