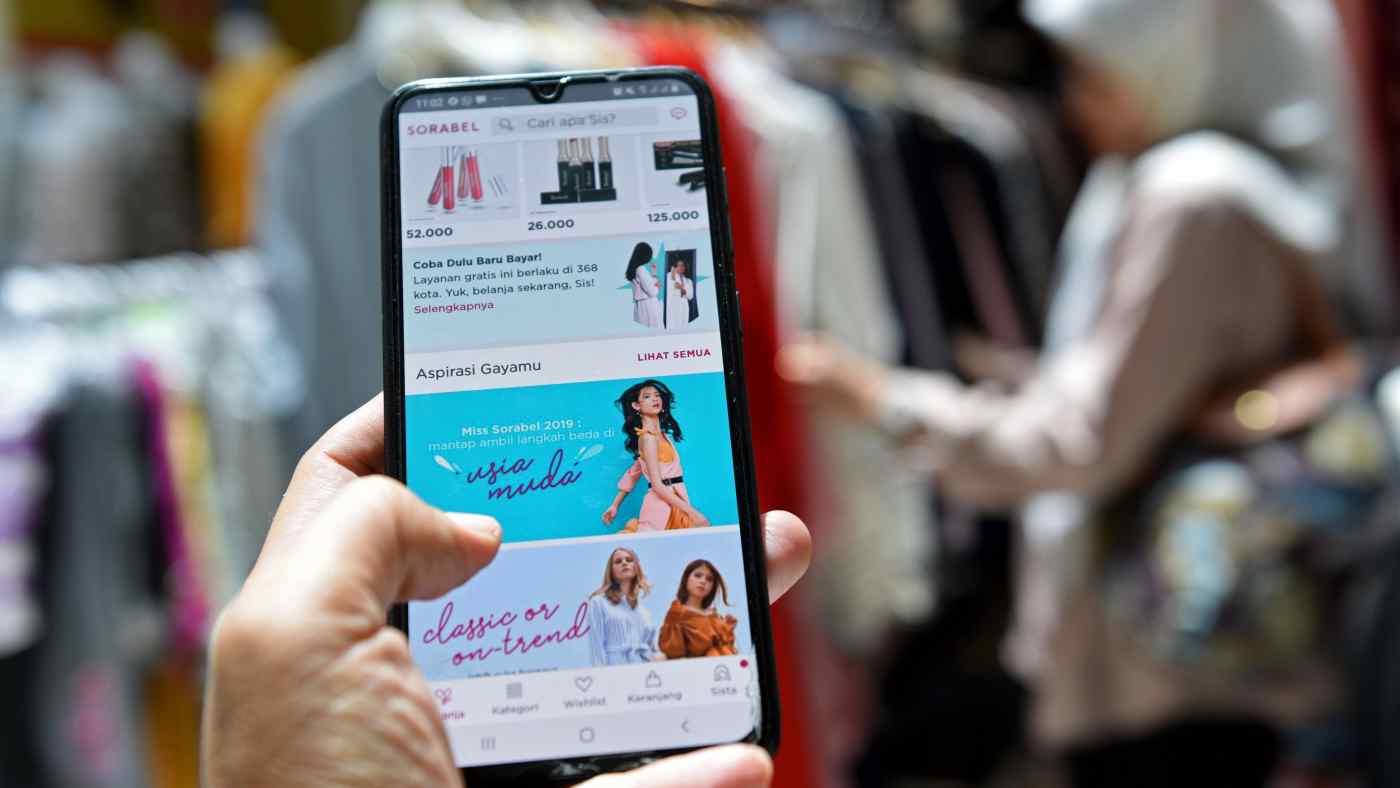 Sorabel's AI looks at over 1,300 data points, including app usage, to tell the company what it should stock up on. (Photo by Kandida Ardi Nugraha)
SHOTARO TANI, Nikkei staff writerNovember 26, 2019 12:18 JST | Indonesia
CopyCopied

JAKARTA -- Armed with an artificial intelligence application that helps it to spot fashion trends, and supported by what it claims is a clear path to profits, Indonesian fashion e-tailing Sorabel talks the usual talk of all startups except that it is also turning to a retail model from yesteryear to gain customers: actual physical stores.

Sorabel, which started in 2014 as a online marketplace for cheap and mainly women's clothes, says more than 50% of its online orders come from outside Java, the most populous and prosperous part of the archipelago. To match that, it now plans to open 15 physical shops by the end of 2020, mostly in small provincial cities.

"We look at offline as, ironically, a relatively cheaper way of acquiring customers," Jeffrey Yuwono, the company's co-founder and CEO, told the Nikkei Asian Review. "It will help us build the brand... Our products and margins are strong enough that [offline retailing] in itself can be a viable and profitable channel."

Sorabel, which has shifted to become a largely private-label-driven enterprise, has developed a niche catering to customers on the lower rungs of the income ladder. Thanks to a network of warehouses across the country, it has also seemingly solved the riddle of managing logistics in a nation scattered over about 6,000 inhabited islands.

Having offline stores "is necessary because online is... no longer a cheap channel" to acquire new customers, Yuwono said. "Maybe four or five years ago, when there wasn't so much noise, [it was] a great way." But, he said, other apparel e-tailers "spend so much money" to increase their online presence "that it is becoming more and more expensive" to compete.

Originally called Sale Stock, it rebranded to its current name earlier this year. Two of its three co-founders -- married couple Lingga Madu and Ariza Novianti -- left the company this past weekend to "explore new business opportunities."

That leaves Yuwono clear to steer a business that has raised $27 million across four funding rounds, according to Crunchbase, and has seen gross merchandise value grow 10 times in the past four years. Though Sorabel is not yet in the black, it says it has a gross margin of 58%, comparable to global online fashion players like the U.K.'s Asos. Offline endeavors are becoming a common thread among Southeast Asian fashion brands. Sorabel's move follows Singapore's Love, Bonito, which made the leap in 2017, while Thai startup Pomelo made real-world pickup points central to its strategy and opened a store in Singapore earlier this year. None of this is surprising when you consider the region's low ratio of online sales to all retail -- 10%.

Openspace Ventures, a Sorabel investor, thinks Yuwono is on the right track. The startup has "invested and built one of the best logistics infrastructure [networks] that serves the whole nation," said Eng Seet, Openspace's vice president.

"They have observed very strong growth in the tier-two and tier-three cities since rebranding," Seet said, adding that the introduction of offline stores next year "will deepen their penetration to these segments."

In the early days, the company sourced garments from myriad suppliers, but Yuwono said customers' top complaint was about inconsistent quality. "Buying a $10 blouse takes a big chunk out of income" for Indonesians whose average monthly pay is 2.8 million rupiah ($200), he said. "Buying something not good is heartbreaking."

The only way to solve the problem was "to control the production process ourselves," he said. "Over 80% of our apparel revenue today is private label."

The company has partnered with 40 small garment manufacturers, mostly in the Greater Jakarta area, to produce its clothes and keep prices low. Most of its private-brand clothes sell for less than 200,000 rupiah, around a quarter of the prices on comparable items at high-street stores. A quality control team checks the finished goods, and there are plans to offer the factories training as well as better equipment.

When it comes to logistics, Sorabel has warehouses across the country. This keeps costs in check and allows for speedy deliveries. The company says 80% of orders arrive within three days. While its $27 million intake from investors is less than half what Pomelo has raised, Yuwono believes Sorabel's proprietary AI can set it apart.

The AI crunches more than 1,300 data points -- combing through app usage information as well as outside sources -- and gives recommendations on what the company should stock up on. Yuwono said trumpet sleeves are a case in point.

"Trumpet sleeves were the biggest fashion trend in Indonesia. It was 10% of our revenue. Our computer picked it up as soon as we turned it on," the CEO said. "We started making lots of variations: dresses with trumpet sleeves, blouses with trumpet sleeves. That did well. If you look at all the other fashion verticals, they didn't have trumpet sleeve inventories until the third quarter of 2017, one full year behind."

Yuwono said the business is "all about detecting what is in fashion, what people really want and moving as quickly as possible." He called it the "Zara model on steroids."

Everything in the warehouses sells within a month, he said. "Because of this tech, we can be agile, we turn over inventory really quickly."

Sorabel has not always operated like a well-oiled machine, however. 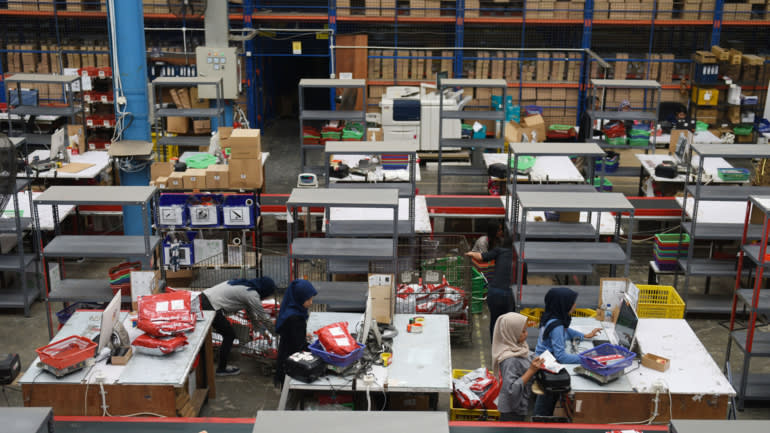 Sorabel says everything in its warehouses sells within a month. (Photo by Kandida Ardi Nugraha)

In 2016, it laid off around 200 people, including contractual warehouse workers, after realizing that its "[cash] burn was a little bit too high."

But Yuwono believes the experience prepared the company for the current moment. After Uber's and Lyft's IPO flops and the WeWork fiasco, investors want startups to show they can make money. The CEO thinks he can now make a strong case to prospective backers.

"With WeWork and Uber, there's a lot more attention being paid to the economics, which is great for us," Yuwono said. "For the first time, we feel popular." 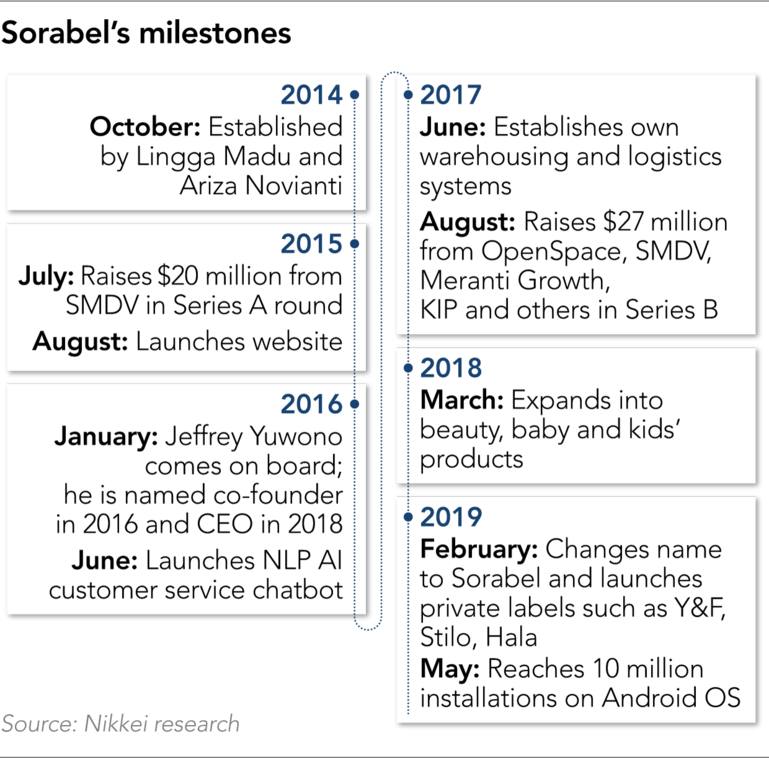