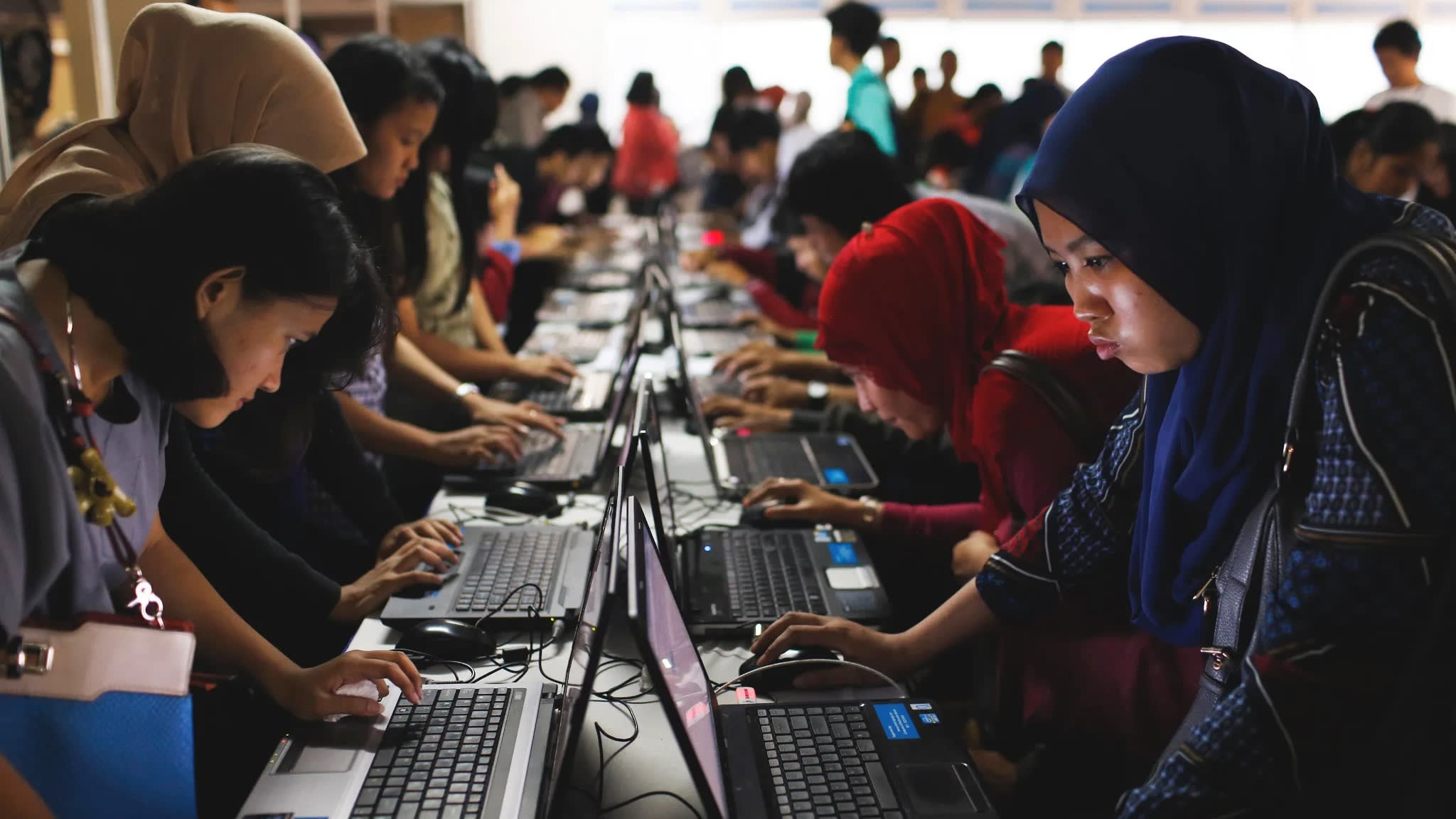 Job seekers in Jakarta: The government aims to ease rules on foreign hiring by startups, which have struggled to find local tech talent.   © Reuters

JAKARTA -- Indonesia is proposing to make it easier for startups to hire foreign talent, lending a hand from the government to a sector that it sees as essential to economic development, but one that has struggled with a lack of domestic talent.

The change is part of sweeping reforms that President Joko Widodo has put forward in a draft omnibus law on job creation, which packages a number of legal revisions into a single vote.

Indonesia is home to five unicorns, or startups valued at over $1 billion -- more than any other Southeast Asian country. Yet its startup scene has long bemoaned the lack of local tech talent. Indonesia produces only 278 engineers per million people a year, far behind regional peers such as Malaysia or Thailand, which produce well over 1,000, according to consultancy A.T. Kearney.

The 1,000-plus-page draft, a copy of which was obtained by the Nikkei Asian Review, also includes a simpler process for business permits and relaxed labor rules.

The president has already submitted a separate omnibus bill on taxes to the parliament. It includes provisions to gradually lower corporate taxes, as well as make internet companies that offer service in Indonesia without having a local presence pay taxes in the country.

The omnibus laws are an integral part of Widodo's second and final term. The president, popularly known as Jokowi, hopes that by cutting red tape, the country will attract more foreign investment and boost economic growth.

Growth in Indonesia's real gross domestic product has hovered around 5% since 2014, when Widodo took office -- far below the 7% mark that the president had first aimed to achieve.

The copy of the job creation bill says that an employer categorized as a "startup" need not have its plans to hire foreign workers approved by the central government. The previous labor law only allowed "representatives of foreign countries that use foreign workers as diplomatic and consular employees" to receive similar treatment.

Unicorns like ride and payment provider Gojek and e-commerce group Tokopedia tend to attract the cream of the crop in Indonesia's tech workforce, which pushes up engineering salaries to a level that smaller startups cannot bear. A founder of a Jakarta-based startup said that he outsources work to engineers in Beijing because "it is much cheaper" than hiring local tech workers. Some unicorns also outsource systems development to India.

An easier process for startups to hire foreign talent may reverse some of the outsourcing trend, while potentially allowing local engineers to learn from their higher-skilled foreign peers.

The bill, once submitted to the legislature, is likely to pass, as Widodo's ruling coalition controls about three-quarters of the 575 seats in the People's Representative Council.

The question is whether the president as well as lawmakers are willing to spend political capital to push through the reforms, which remain unpopular -- especially among workers, who fear a loss of rights. More than 4,000 people protested outside the legislature on Wednesday when the job creation bill was submitted. A senior member of Widodo's Indonesian Democratic Party of Struggle, or PDIP, has publicly criticized the bill as "too business friendly."

In a recent interview with the BBC, Widodo said he expects the bill to take six months to pass.