TOKYO/SINGAPORE -- For a country with little success in having homegrown startups go public, the sale of Philippine payments company Coins.ph in January was a landmark deal. But it had a twist.

Instead of raising cash through an initial public offering of its shares, the startup found a different kind of buyer -- Indonesian ride-hailing company Go-Jek, which acquired Coins for more than $70 million.

"It's now proof that these startups could actually work," said Paul Santos, managing partner at venture capital firm Wavemaker Partners, an early investor in the Philippine startup. "I am hoping that the success of Coins will inspire the next generation of founders and show investors that there are interesting companies in Southeast Asia."

Coins was one of 11 startups that Go-Jek bought in the last three years, a frantic pace that has brought about a shift in the venture industry where investors are now counting on these unicorns, rather than stock listings, to cash out.

For investors in Southeast Asian startups, Go-Jek has become a valuable alternative to which they can sell down their stakes in startups, rather than count on an eventual stock exchange listing.

"The IPO landscape in Southeast Asia is relatively small," Michael Lints, partner at Golden Gate Ventures, told the Nikkei Asian Review. "Besides Singapore and Hong Kong, startups do not have a lot of options to list."

According to estimates outlined in a new report by Golden Gate, a Singapore-based venture capital firm, the number of Southeast Asian startups being acquired by other companies, investment funds or those listing their shares in local stock exchanges will soar to 759 in the three years from 2023 to 2025. That is larger than the collective figure for the five years to 2019.

More than eight in 10 of those exits are expected to come in the form of acquisitions. By contrast, Golden Gate expects just 22 startups to float over the 2023-2025 period.

Major buyers will be Go-Jek and other unicorns -- private companies valued at $1 billion or more -- that seek acquisitions to speed up growth.

"We are seeing a lot of cases where unicorns are undertaking an inorganic growth strategy to fuel their growth runway," said Lints. "The acquisition could be complementary to their current product offering and market expansion plans. We believe the acquisition trend would continue as unicorns are looking for ways to grow their market." Go-Jek, which is backed by companies such as Google, Tencent and JD.com, has been the region's most prolific acquirer so far, but others are catching up. Trax, an artificial intelligence software developer which recently raised hundreds of millions of dollars from Chinese venture capital funds, bought three companies this year alone.

Tokopedia, an Indonesian e-commerce company backed by the SoftBank Group's $100 billion Vision Fund, acquired local wedding organizer Bridestory in June. Details of most of these acquisitions are undisclosed.

Acquisitions are a way for companies to expand across Southeast Asia, a region where local needs and regulations vary widely. Traveloka, an Indonesian travel tech unicorn, acquired local peers in the Philippines and Vietnam last year.

The presence of buyers like Go-Jek are crucial, especially because IPOs are expected to remain a challenging option. Many countries lack a strong base of investors that will buy shares of tech companies at an IPO. Some exchanges also have regulations that prevent unprofitable companies or those with superior voting rights from seeking a listing.

The trend is a tailwind for venture capital funds, who can cash out of companies despite an underdeveloped stock market. Funds are judged by their ability to sell their investments and return cash back to their investors -- successful sales of companies will enable them to raise bigger funds, creating a virtuous cycle.

But it also means investors in early-stage startups will increasingly depend on the ability of unicorns like Go-Jek and Grab, its Softbank-backed rival in the region, to continue raising massive amounts of capital. The two companies are reportedly aiming to raise $6.5 billion collectively in their ongoing funding rounds. 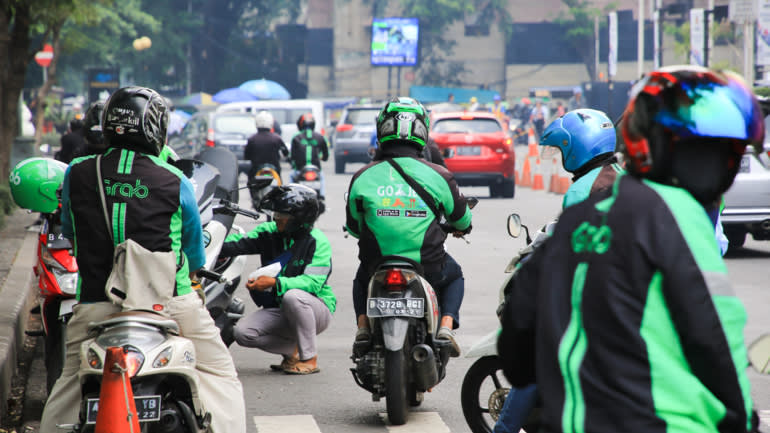 If global appetite for risky investment cools, the whole industry risks a slowdown, analysts said. The high valuations fetched by loss-making private tech companies are now under intense scrutiny in the U.S. as many of them head to public markets.

Ride-hailing giant Uber Technologies was valued at more than $60 billion at one point, but its post-IPO market capitalization had fallen to $54 billion by Monday. Softbank-backed WeWork, which was valued at $47 billion in its last private funding round, is reportedly considering an IPO with a valuation less than half that amount.

This trends means that Go-Jek, Grab and other promising unicorns will face increased scrutiny over their own private valuations should they decide to go public.

"As long as the music keeps playing, it's easy to choose growth over profitability," said Claudia Zeisberger, a professor at INSEAD, which participated in the report. "But the music will not play forever. At one point unicorns will have to show that they can survive in a downturn as well -- without new cash injections."