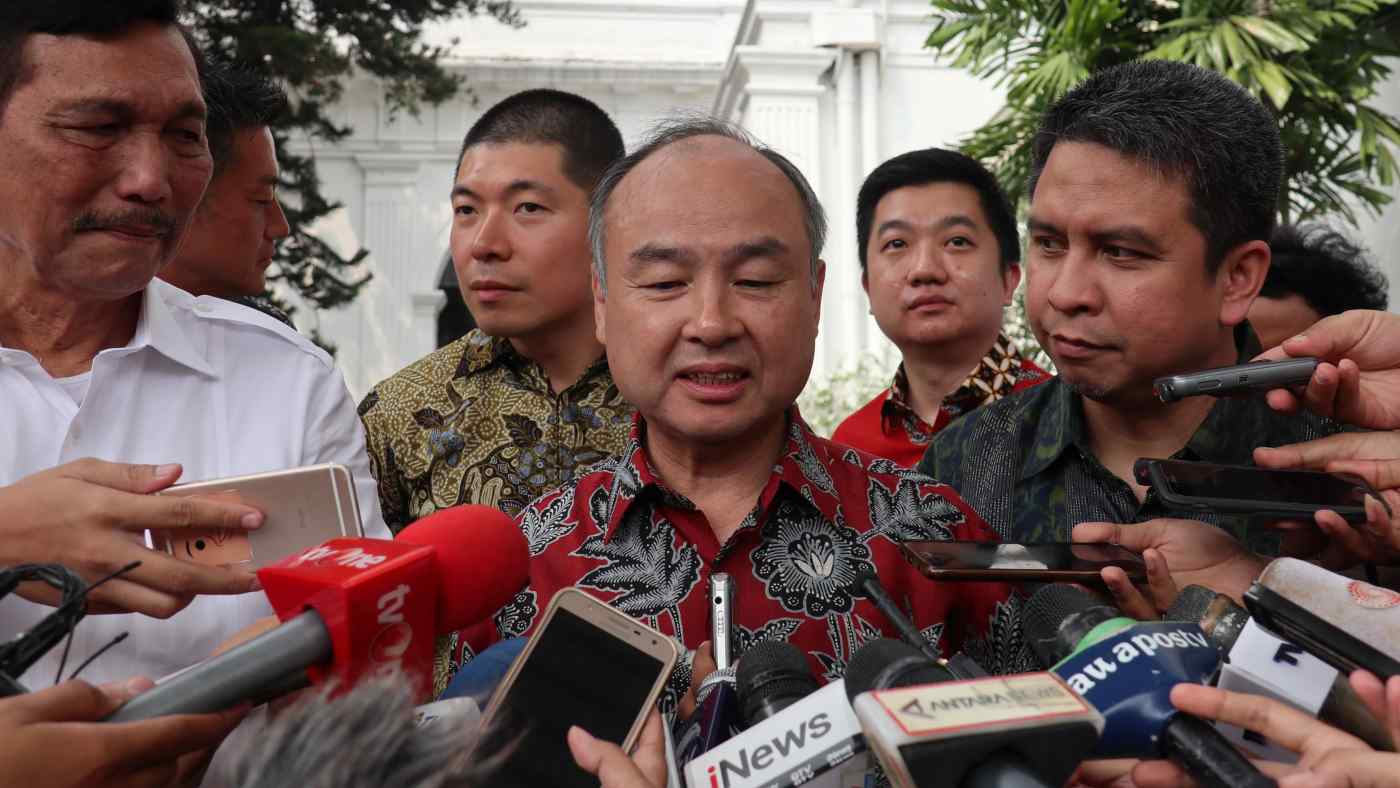 JAKARTA -- SoftBank Group will invest another $2 billion in Indonesia, covering areas such as artificial intelligence and the development of an electric vehicle ecosystem, CEO Masayoshi Son said after he met with President Joko "Jokowi" Widodo on Monday.

Son said he intends to channel the money through Singapore-based Grab, Southeast Asia's leading ride-hailing company, which will use some of the cash to build its second headquarters in Jakarta.

A SoftBank spokesperson said the new $2 billion commitment to Indonesia will come from the company's existing investment in Grab. SoftBank, through its Vision Fund, has invested roughly $3 billion in the ride-hailer. Grab earlier invested over $1 billion into Indonesia, its largest market.

The Japanese company also will increase its investment in Tokopedia, Indonesia's largest online marketplace and one of four unicorns in the country. Son did not reveal the investment amounts in each of these areas, but it is understood that AI development will be a focus for both companies.

"We have already invested $2 billion in Indonesia, and now we would invest another $2 billion," Son told reporters after an hourlong meeting with Jokowi at the presidential palace in Jakarta. "Artificial intelligence is our focus. We will invest more into unicorns, and help create more unicorns in Indonesia." Unicorns are private companies valued at $1 billion or more.

Son said he also wanted to invest in smaller Indonesian startups, though he did not identify any prospects.

The SoftBank CEO said he wanted to invest in electric vehicles and renewable energy in Southeast Asia's largest economy -- citing solar, wind and geothermal energy -- to tackle the crises of high carbon emissions and pollution. Jakarta recently topped the list of most polluted cities in the world, according to real-time pollution monitoring platform AirVisual.

Asked whether this means investments in startups or bigger companies, Son replied, "We will study the opportunities, but we are definitely interested in electric vehicles, batteries and charging systems. We will invest in the ecosystem, and potentially invest into renewable energy."

The meeting took place just a few days after Son's company unveiled Vision Fund II, into which investors including SoftBank itself as well as Microsoft and Taiwan's Hon Hai Precision Industry have agreed to contribute at least $108 billion. The Japanese group's first $97 billion fund, launched in 2017, was the biggest private pool of money ever raised, making Son the most prominent investor in the tech world.

Son previously has spoken of his ambition to double down on AI development, likening the future of artificial intelligence to the internet revolution more than 20 years ago. In an interview with Nikkei last week, he cited corporate business models, health care and transportation as three areas that would be "most drastically transformed by AI in 10 years."

For its part, Grab said in a statement that the $2 billion would be invested over five years.

"The investment will go toward creating a next-generation transportation network for cities and transforming how critical services, like health care, are delivered," the ride-hailer said. "Both companies will also develop geo-mapping solutions for Indonesia, in order to drive the country's development and adoption of future technologies."

Grab already operates in more than 200 Indonesian cities and regencies, nearly half the country. The new initiative with SoftBank will give Grab greater ammunition in its battle with archrival Go-Jek, a homegrown company.

"The emphasis for electric vehicles -- the most important -- is to build the ecosystem. Who will drive them? Surely we hope our drivers will," said Kramadibrata, who joined Son's Monday meeting with Jokowi, along with Grab co-founder and CEO Anthony Tan as well as Tokopedia CEO William Tanuwijaya.

Grab earlier said it was on track to raise a total of $6.5 billion between June 2018 and the end of this year, from investors including Japan's Toyota Motor. Much of the capital will be deployed in Indonesia, the company said.

In an interview with the Nikkei Asian Review in April, Grab President Ming Maa said Indonesia offered huge opportunities, including in financial services. Grab has partnered with local payment operator Ovo, developed by Indonesian conglomerate Lippo Group, on mobile payments in the country.

Son is the third high-profile investor that Jokowi welcomed in the palace over the past week, in the wake of the Constitutional Court ruling that confirmed his reelection.

The president met with the crown prince of the United Arab Emirates, resulting in the signing of $9.7 billion worth of deals in sectors such as oil and gas, petrochemicals and container port development. Separately, Jokowi met with Hyundai Motor Executive Vice Chairman Chung Eui-sun to discuss tax incentives for the automaker's plan to build a factory in Indonesia in 2021, as well as future investment opportunities in electric vehicles.

Nikkei staff writers Kentaro Iwamoto in Singapore and Wataru Suzuki in Tokyo contributed to this story.