Sheep fleece turned into fertilizer and soap for export Helen Botanical Beauty has been exporting its organic exfoliating soap -- which has a wool felt wrapper enclosing a ball of soap made from sheep tail fat and other natural ingredients -- to Europe. (Photo by Uugansukh Byamba)
KHALIUN BAYARTSOGT, Contributing writerApril 25, 2022 07:58 JST | Mongolia
CopyCopied

ULAANBAATAR -- Mongolia is a leading player in the global market for wool -- for cashmere from goats that is.

The country is home to 30 million sheep, too. But unlike the merino breed prevalent in Australia and New Zealand whose soft, fine wool is valued for sweaters, scarves and other clothing almost as much as cashmere, Mongolia's 15 native breeds produce a fleece too thick and coarse for such use.

Until recently, most Mongolians lived in circular tents called ger which were covered with sheep's wool felt to retain heat amid the country's freezing winters. But urbanization has cut such demand.

With prices for sheep's wool stagnating around 2,000 Mongolian tugrik (76 U.S. cents) a kilogram, local entrepreneurs have begun cooking up new uses for the material, giving hope that the country can move up from its reliance on commodity exports as well as boost farm incomes.

Tsogbadrakh Bayanjav is one of the wool pioneers. During his time as a Mongolian trade representative in Europe, he came across scientists at Humboldt University in Germany who were experimenting with turning sheep's wool, which naturally contains nitrogen and potassium, into organic fertilizer.

Now at a smelly factory in Tuv Province southeast of Ulaanbaatar, Tsogbadrakh's company Monpellets applies the Germans' technology, using imported machines to clean wool to remove bacteria and then crush it into a powder.

The powder in turn is pressed into cylindrical pellets that can retain 3.5 times their weight in water and support plant growth for up to 10 months, according to the company's tests. 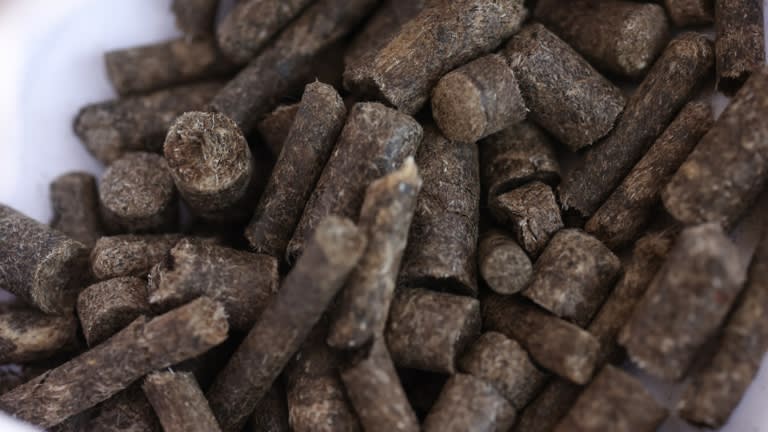 Monpellets fertilizer can support plant growth for up to 10 months, according to company tests. (Photo by Uugansukh Byamba)

Monpellets exported 20 tons of pellets to Germany in 2019, then doubled its foreign sales the next year. After hitting 80 tons in 2021, Tsogbadrakh aims to bring in 240,000 euros ($261,000) in revenue by exporting 220 tons this year and is seeking financing to build a second factory.

Tsogbadrakh brags about the performance of his pellets in laboratory tests and field trials. "A mining company in Bayankhonhor Province struggled to grow vegetation at the site of its old mine, but after using our fertilizer, vegetation appeared," he said.

His next ambition is to use the pellets to support organic greenhouse farming in Tuv that would be capable of competing with imported Chinese vegetables. "I'm looking for a partner who will share the same vision with me," he said.

Meanwhile in Darkhan, an industrial city near Mongolia's frontier with Russia, Byambadorj Mendbayar's company Eco Wool has taken a fresh look at sheep's wool as an insulator.

After seven years of testing and developing, the company began exporting rolls of chemical-free sheep's wool insulation to Japan in 2018 as well as selling to local customers.

Byambadorj says the sheep's wool insulation provides almost seven times better thermal resistance than fiberglass and is highly fire resistant. It also absorbs noise and moisture, a useful feature in humid climates. By using local wool, Eco Wool can sell its insulation at less than $70 per 10 sq. meters versus over $100 for comparable Merino-based products. The ger, the traditional Mongolian home, is covered with a felt made from sheep's wool for insulation.     © Reuters

"Wool not only traps air between fibers, but air is also trapped inside the fibers, retaining more heat," said Enkhtuya Dorj, a professor of textile engineering at the Mongolian University of Science and Technology in Ulaanbaatar. "That is why wool is the perfect insulation material."

Unfortunately, Chinese border closures to control COVID have disrupted exports for Eco Wool as well as much bigger Mongolian companies. This has made Byambadorj more reliant on the local market where construction is still booming.

Perhaps the most unlikely new use for sheep's wool is in cosmetics. Helen Botanical Beauty has been selling an organic exfoliating soap which has a wool felt wrapper enclosing a ball of soap made from sheep tail fat and other natural ingredients.

"We try to use our domestic organic resources as much as we can," said Bayasgalan Burenchudur, founder of the Ulaanbaatar-based startup. The company has been shipping soap to Germany and other European countries, as well as selling it through souvenir shops at Mongolia's international airport and tourist sites.

Helen recently started producing sheep's wool balls for use in clothes' dryers as an alternative to fabric softener or plastic balls and has secured trial orders from the U.S. and Germany.

"If there were no COVID, we could have shined even brighter," Bayasgalan said.