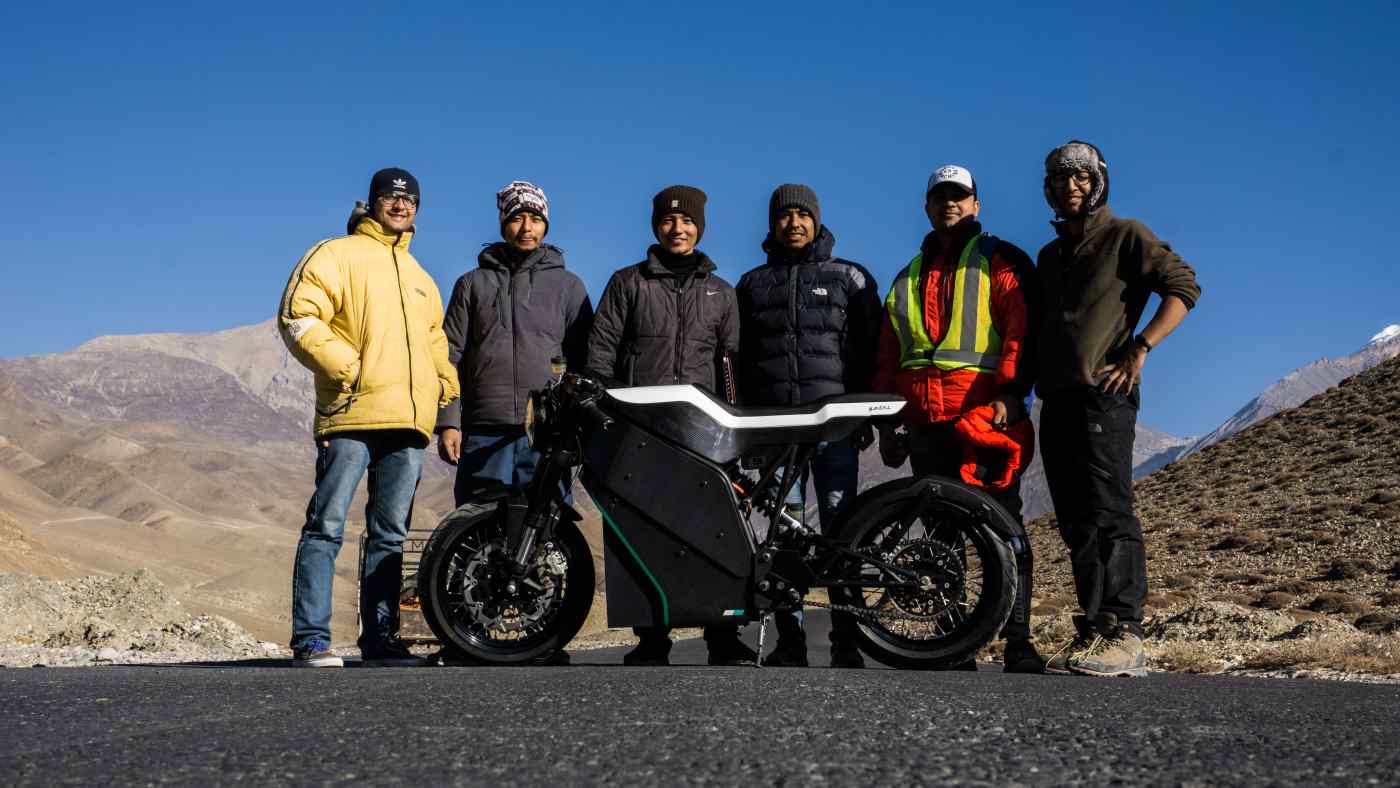 KATHMANDU -- Yatri Motorcycles, a Nepali startup, is set to launch its first electric motorbike "after the summer" this year as the country aims to accelerate the implementation of electric vehicles.

In December, the startup, founded and led by Ashim Pandey, unveiled its V2 model, which it claims is the country's first home-built electric two-wheeler.

The motorbike's specifications are fairly simple, running off a 30 kW engine, with a 6 KWh battery that charges in two hours and gives the bike a mileage of 230km and a top speed of 120km per hour. The motorbike has minimal design, with a carbon fiber body for weight reduction. It also comes with a 7-inch full HD dashboard linked to the Yatri Hub app, which has features including GPS and speed monitoring.

The price tag for the motorcycles has yet to be determined but it is likely to be in the high range for the country.

Nepal's market for fuel-run two-wheeler vehicles in the Kathmandu valley area stood at 750,000 units in April 2019, which contributes to poor air pollution. Although electric cars have made up about 10% of sales in Nepal since 2019, electric motorbikes have not taken off.

Pandey believe that his company has emerged at the right time as the country is moving towards having an electricity surplus.

Yatri came about due to the efforts of several Nepali engineers. The company aims to tap the country's electricity reserves and solve its pollution problem, especially in the capital city of Kathmandu. The company aims to sell its electric motorbikes in the wider Asian market, after first promoting the product in Nepal. Most of the motorcycle's parts are imported, and subject to 35% import charges, but it was designed locally.

However, the lack of charging stations and parking lots, topographical challenges and the low market appeal makes selling electric vehicles a challenge.

The Nepal government recently made it mandatory for customers to register their electric vehicles. The current government aims to have 20% of the country's public vehicles battery powered but there is little industrial or policy support for startups to produce electric vehicles for consumers. The country also does not have strong automobile, design and engineering industries.

Pandey, an aerospace graduate of Delft University of Technology in the Netherlands, returned to Nepal to establish Yatri Motorcycles in 2017. Yatri has been backed primarily by Kalika Group, one of the most respected business conglomerates in Nepal.

"We plan to work on the next model which will be much more practical [for commuters] in terms of design, ergonomics and pricing for the Nepal mainstream market," Pandey told the Nikkei Asian Review. In the longer term, Yatri Motorcycles is aiming to tap the European market.

Pandey said the biggest challenge for Yatri to roll out its electric bikes was a shortage of highly skilled engineers in Nepal. "Besides, a lack of local industrial support means we have to either be a very vertically integrated company or outsource some of our design to manufacturing companies overseas," he said.

As part of Yatri's effort to overcome these challenges, the startup is planning to manufacture parts within Nepal using 5-axis CNC technology, which uses versatile manufacturing machines with five axes that can operate simultaneously.

Following a seed funding round in 2018, Yatri plans to raise series A funding in late 2020.

"We aim to raise $10 million. We are in a new segment in Nepal and see ourselves as the only player in this high performance electric motorcycle segment," Pandey said.