Oyo another WeWork? Not likely, as startup shifts goal 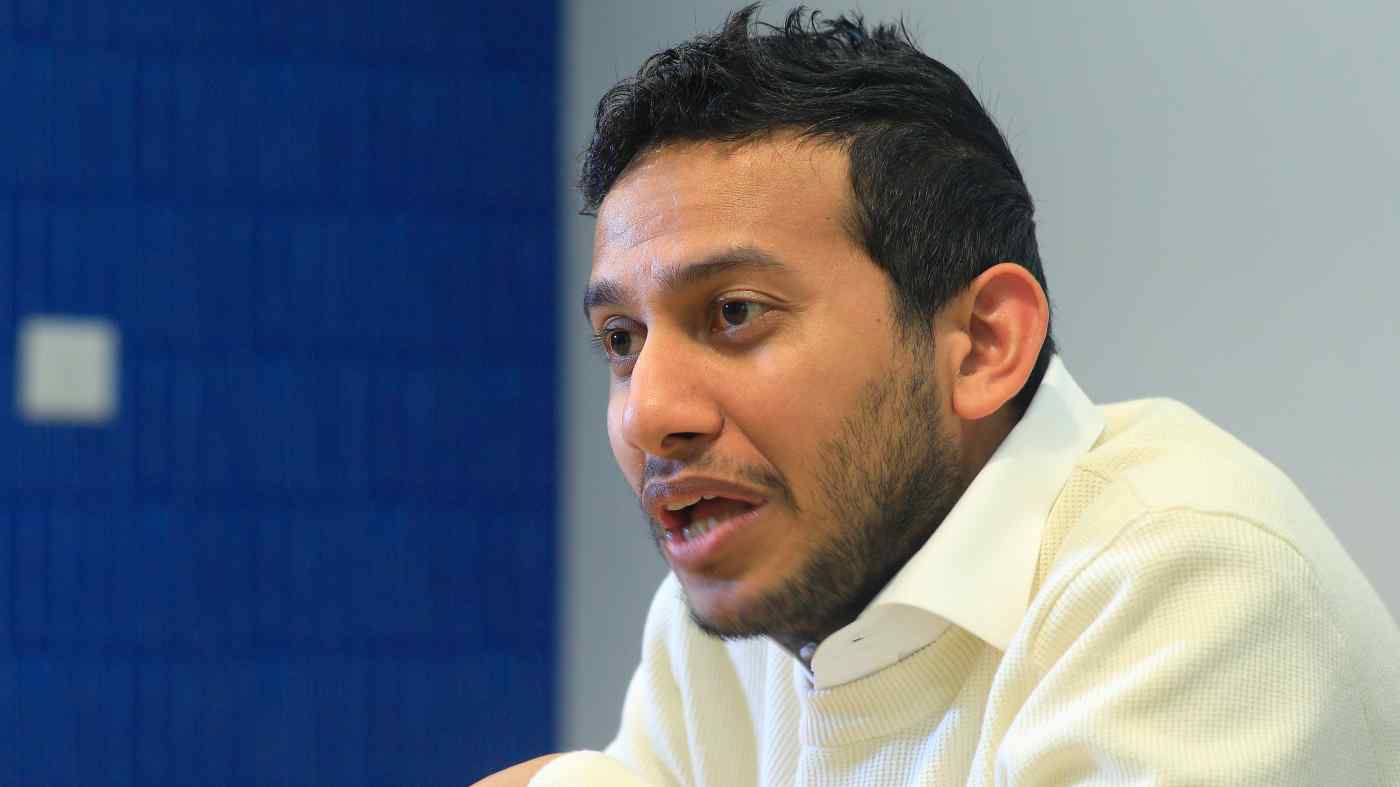 MUMBAI -- Ever since the WeWork megaflop, skeptics have sounded the alarm that other companies in SoftBank Group's Vision Fund are incinerating cash at the same feverish pace that eventually dashed the much-anticipated float of We Company, operator of the office-share.

In particular, they point to India's Oyo Hotels and Homes as another startup that is recklessly burning through piles of investor money.

But the critics may be wrong, as it appears Oyo has learned from the WeWork fiasco. Rather than pushing growth at all costs, the company is now laser-focused on profitability.

In mid-February, the Indian decacorn -- a startup valued at $10 billion or more -- revealed its "Annual Report Card," which contained 2019 financial results and its new operational priorities, the top one now being the bottom line.

As part of that push, the company told Nikkei early February, it is in the process of reducing its global workforce roughly from 30,000 to 25,000, reflecting both layoffs and new hires. The company said the headcount reduction includes layoffs of roughly 2,000 workers in India but it has not disclosed the number of layoffs in China or any other markets. While the company was planning to complete the workforce reduction by the end of February, the process is being prolonged due to the coronavirus situation in China, company spokesperson said Wednesday.

The Oyo brand has been under fire since last summer. Many hotel owners in the chain began accusing the company of failing to deliver on promises of guaranteed revenue, while guests complained of dirty rooms and botched bookings.

Since then, Oyo's management, led by 26-year-old founder and CEO Ritesh Agarwal, recognized that operations had failed to keep pace with the changes wrought by the breakneck expansion of Oyo's network.

In an unusually frank admission, the report said that management "sometimes got ahead of ourselves," adding that Oyo's customer service strategy did not mesh with that of its franchise hotels. This resulted in dissatisfied customers and "unfavorable social media coverage."

To turn things around, the report clarified that the priority for 2020 is "sustainable growth," achieved by balancing expansion with operational capabilities. The company also pledged to "focus on profitable locations and avoid growth that dilutes our margins."

This marks a reversal of past policy and its focus on accumulating new hotels as fast as possible, just to become the world's largest hotel chain by room count. Surprisingly, the company did not even show the room total, which had headlined last year's report.

This year, the company disclosed that it was already on the path to profitability in the Indian market in fiscal 2019 ending March. It also quoted Agarwal and top management as saying Oyo's China operations would follow suit. 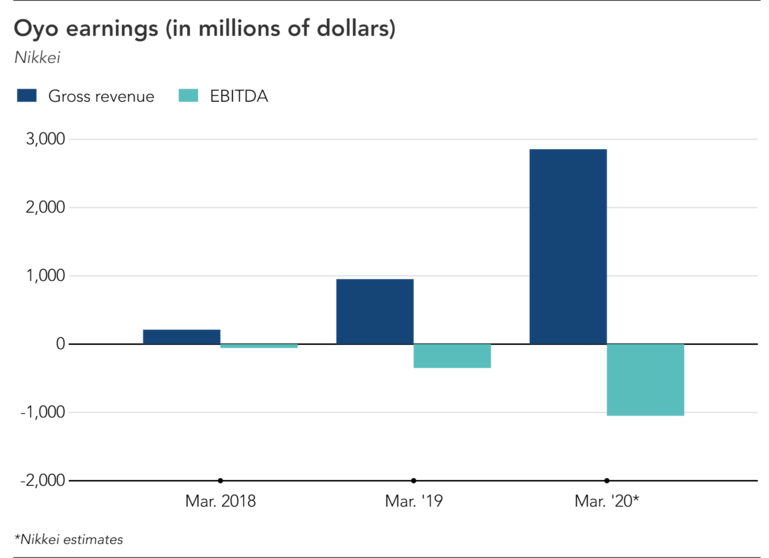 On top of that, the company had already implemented measures to improve profitability in India last autumn. It has canceled contracts with over 1,000 hotels due to unfavorable locations or less than enthusiastic management.

This is expected to further improve the EBITDA ratio, providing a boost to financials before the close of the fiscal year at the end of the month.

Aggarwal told the Nikkei Asian Review that "every country in the first year has to lose money because we have to first hire people and spruce up rooms. But the second year onward, [profitability] keeps improving."

The CEO's remarks apply to Oyo's operations in China, now in their second year.

India and China account for the bulk of revenue, hence the global EBITDA loss ratio in 2020 will likely be less severe than in 2019. Cash flow is also expected to improve.

Management said annual revenue has been growing at 200%, putting Oyo on pace to rack up $2.5 to $3 billion through March 2021. Hence, EBITDA loss will likely be no more than 38%, or a little over $1 billion.

Agarwal also told Nikkei that Oyo has more than $1 billion in cash and equivalents, enough to cover future plans, obviating additional fundraising. His remark reflects confidence that he will be able to limit EBITDA loss to less than $1 billion this year. 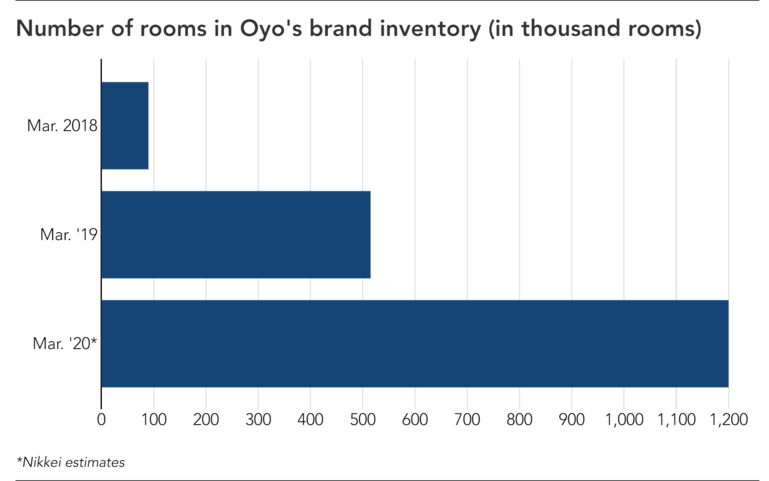 Aside from the company's claim of a path to profitability, the franchise model it employs has been time-tested in retail, fast food and other sectors. And unlike WeWork, Oyo does not own or lease properties, allowing it to avoid real estate overhead.

Franchises pay Oyo for its artificial intelligence-based, customer acquisition technology, among other services. The technology is designed to ensure an average room occupancy rate of above 80%. Once a franchise is up and running, it is usually assured a steady cash flow.

"For small, independent hotel owners like us, there is no other option than joining Oyo to maintain a high occupancy rate," said a hotelier who operates 2,000 rooms in a New Delhi suburb.

In contrast, WeWork's form of lease arbitrage is still a work in progress.

WeWork signs long-term leases -- typically 10 to 15 years -- for buildings and large chunks of office space. It then renovates the space and divides it into smaller workspaces that are sublet on short-term contracts to individuals or corporations. In turn for the higher-than-market-value rents that users pay, WeWork provides a community-like setting and handles all building operations and maintenance.

Lease arbitrage is fraught with uncertainty. In order to turn a profit, WeWork must sublet at prices much higher than ordinary office rent. But the long-term leases that WeWork signs are fixed, while short-term rents can fluctuate depending on the local real estate market and the economy as a whole.

WeWork is popular with young gig workers and startups, who don't mind paying extra for the community vibe. But the atmosphere in the startup world is turning somewhat stingy. For the past few years, venture capitalists have started to regard those startups based in a WeWork as burning unnecessary cash for expensive rents, leading many startups to actually avoid nesting in WeWorks. This is damaging the whole concept of WeWork community, whose primary philosophy is a place where different young entrepreneurs and gig workers grow together.

Although SoftBank pulled WeWork back from the brink of bankruptcy with emergency equity and debt financing, the sustainability of WeWork's business model remains to be proved.

Oyo's business model, however, is much more steady and easier to execute. And the fact that its EBITDA is improving likely reflects the strength of its asset-light franchise model.

Some media reports said Oyo made a mistake by acquiring the Hooters Casino Hotel in Las Vegas. But Oyo's stake in the hotel turned out to be less than 5%, making it more of an investment in naming rights than actual property ownership.

The real challenge for Agarwal and his team is whether they can follow through with what they are proposing in their Annual Report Card and blogs. Time will tell, as figures don't lie and reputations endure.

As has been said before about startup management, execution is everything.