Singapore's Grab to list in US through $40bn SPAC deal The Grab-Altimeter deal will likely be the biggest listing through a SPAC.(Photo by Dimas Ardian)
KENTARO IWAMOTO, Nikkei staff writerApril 13, 2021 19:43 JSTUpdated on April 13, 2021 20:57 JST | Singapore
CopyCopied

SINGAPORE -- Southeast Asia's biggest unlisted startup, Grab, is to go public in the U.S. through a merger with a special purpose acquisition company (SPAC), the "superapp" developer announced Tuesday, a deal that will catapult the Singaporean company and the region's fast-growing digital market into the global spotlight.

Grab will merge with Nasdaq-listed Altimeter Growth Corp., a "blank check" acquisition vehicle under the Silicon Valley-based investment firm Altimeter Capital. The deal values Grab at $39.6 billion, making it one of the most valuable companies in Southeast Asia. The listing will take place "in coming months".

Grab joins a global boom in startups seeking a stock listing through SPACs, which provide a faster route to the stock market than a traditional initial public offering. Last month the operator of WeWork also announced a listing through this route. The Grab-Altimeter deal is set to be the biggest such deal so far.

The listing will raise $4.5 billion for Grab, of which $4 billion is from a group of investors including BlackRock and Singapore state fund Temasek Holdings through a "private investment in public entity" deal, which the company is expected to use to expand its digital financial services and other offerings. Temasek is an investor in Grab's Indonesian rival Gojek. Founded in 2012 by Harvard Business School graduates Anthony Tan and Tan Hooi Ling, Grab has grown to become one of Southeast Asia's best-known tech groups. It offers smartphone-based services under what it calls a "super app" strategy and operates in eight countries: Singapore, Indonesia, Malaysia, Thailand, the Philippines, Vietnam, Cambodia and Myanmar.

The company was founded as a taxi-booking app aimed at providing safe and transparent transport services. It grew rapidly with the spread of smartphones in the region, and has attracted financial backing from global companies. In 2018, it acquired Uber Technologies' Southeast Asia business in exchange for shares.

As competition in ride-hailing heated up, it expanded into other businesses, including food delivery and mobile payments.

The coronavirus pandemic has spurred growth in Grab's food and grocery delivery business, turning them into some of the company's biggest revenue streams. According to research by Singaporean consultancy Momentum Works, Grab was the market leader in food delivery in five countries last year.

Another growth pillar for the company is financial services and insurance. Last December the company received a digital banking license in Singapore and it expects to begin taking deposits and extending loans to individuals and small and midsize businesses early next year.

"It gives us immense pride to represent Southeast Asia in the global public markets," Grab CEO Anthony Tan said in a statement. "This is a milestone in our journey to open up access for everyone to benefit from the digital economy."

Grab said it posted gross merchandise value of $12.5 billion in 2020, which it says is "surpassing pre-pandemic levels and more than doubling from 2018."

Grab has disclosed its detailed financials for the first time. It had net revenue of $1.19 billion in 2020, up from $455 million in 2019. Its net loss for 2020 was $2.7 billion, compared with a $4.0 billion loss in 2019. The company also said its earnings before interest, taxes, depreciation and amortization were expected to turn profitable in 2023.

In January, Grab President Ming Maa said the company's revenue had returned to "well over 100% of pre-COVD levels." He also said the company had achieved "segment break-even for ride-hailing in all of our operating markets."

Grab's listing is a milestone for Southeast Asia's growing startup scene, where multiple well-known unicorns are preparing to list. With the exception of Singaporean online gaming and e-commerce platform Sea, which went public on the New York Stock Exchange in 2017, the region's big tech startups have remained unlisted and have continued to raise funds in the private market. 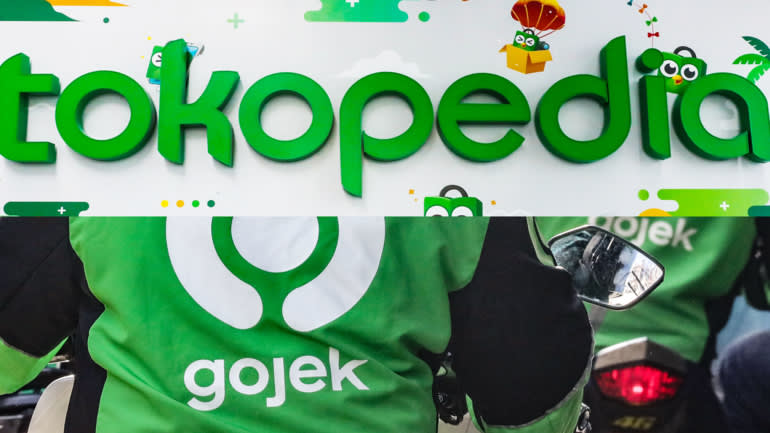 Indonesian startups Tokopedia and Gojek are seeking approval for a merger from their investors. (Source photos by Ken Kobayashi and Kosaku Mimura)

But the stock market boom, driven by low interest rates and a wave of government stimulus, has added momentum to companies' drive to go public. Sea's market capitalization jumped fivefold last year, making it one of Asia's biggest winners from the pandemic. Sea has a market capitalization of about $120 billion and is the biggest listed company in Southeast Asia.

Its success has led Southeast Asian startups to seriously consider their own listings. Among them are Grab's Indonesian rival Gojek and Indonesian e-commerce giant Tokopedia, which are in talks over a merger before going public.