The move offline is aimed at helping traditional retailers counter the growing threat from big e-commerce companies in the region, led by Amazon.com and Alibaba Group Holding. Honestbee opened its first bricks-and-mortar supermarket in Singapore in October.

"We are going to start the projects sometime next year. It will take about six to nine months," Sng said in a recent interview, adding that the company aims to open shops in markets where it already operates delivery services. Initially, Honestbee is looking at three sites in three markets outside Singapore, including Japan, Sng said.

The overseas outlets will be modeled on the Singapore store, Habitat by Honestbee. The 5,500-sq.-meter store offers around 20,000 products, from vegetables to wine to ready-to-eat food.

Shoppers do not need cash to make purchases: All transactions are handled by the Honestbee app. Customers enter the store by scanning a QR code on the app. They select a product, scan the bar code on the package and pay with e-money. Shoppers can also order pasta, fresh juice and other prepared food with the app and eat it in the shop. The technology and physical store create an experience that differs from both the typical retail outlet and an e-commerce site. 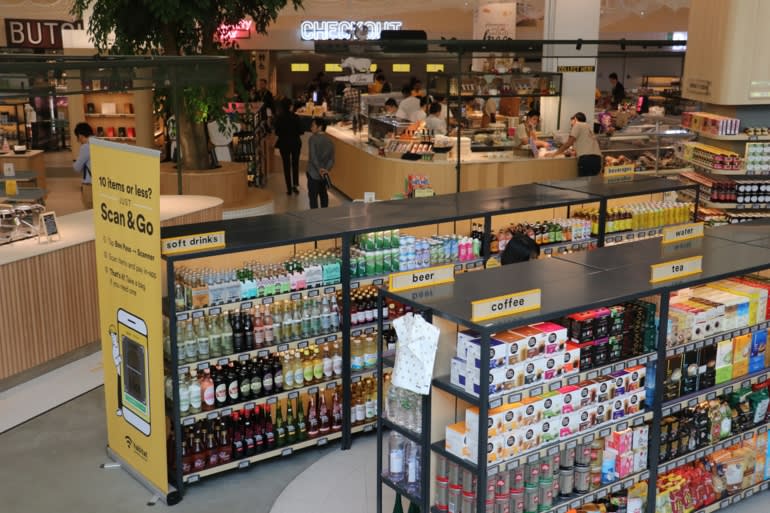 Habitat by Honestbee offers around 20,000 products. (Photo by Kentaro Iwamoto)

Honestbee began life in 2015 in Singapore as the developer of a delivery app. For consumers, the app is a concierge: Customers place their orders; Honestbee staff purchase the items from supermarkets and restaurants; and the goods are delivered. Honestbee is also a partner to bricks-and-mortar retailers battling e-commerce companies. It makes money by charging partner stores a commission.

Rapid digitization in Asia has fueled the company's growth. Over the last three years it has expanded to Hong Kong, Malaysia, Taiwan, Indonesia, Japan, Thailand and the Philippines. According to Crunchbase, which keeps track of startups, Honestbee has raised a total of $46 million from U.S. and South Korean investors.

The Habitat store is the company's latest move to team up with traditional retailers and meet the challenge from e-commerce titans. The Singapore outlet has about 70 retail partners, which provide the store's products. "Everyone says retail is dying, but we will work together with partners to really change the game," said Sng.

A representative from Singapore's Prime Supermarket, a local chain that sells vegetables and other fresh food through the Honestbee outlet, said the partnership would help Prime Supermarket reach more customers.

In Southeast Asia, e-commerce has begun to take off, with Amazon entering Singapore in 2017. Alibaba subsidiary Lazada and Tencent Holdings-backed Sea are also pushing e-commerce in the region.

A recent study by Google and Singapore's Temasek Holdings forecast that the gross merchandising volume of e-commerce in the region will reach $102 billion by 2025, up from this year's estimate of $23 billion. With traditional retailers coming under more pressure, Honestbee sees an opportunity.

"[Traditional retailers] are fighting with Amazon, trying to [battle] against Alibaba. It is with us that they're able to compete," Sng said.