SoftBank zeroes in on Southeast Asia in search of next Grab SINGAPORE -- SoftBank Group is stepping up investment in startups in Southeast Asia again. Many of these startups are unicorns -- a company valued at over $1 billion -- or soon-to-be unicorns. SBG aims to repeat the success it made with Grab, a Singapore-based ride-hailer, whose corporate value shot up after it invested in the company at an early stage. Given that the risk of investing in Chinese internet companies is increasing with Beijing's tightening of restrictions, the ratio of investment that goes into Southeast Asia, which has huge growth potential, may increase further.

On May 12, SBG held a briefing to explain the financial results for the year ended March 2021 and Chairman and CEO Son Masayoshi talked about the attractiveness of Trax, a Singaporean unicorn and retail analytics company in which the SoftBank Vision Fund 2 had invested a month earlier. "A number of leading U.S. brands are prompted to visit Trax after hearing that the company has helped shorten product stockout time dramatically and push up sales by 20%," he said. "Trax will transform global sales operations."

Trax provides a system that enables client companies to keep track of stock shortages and inventory at all times by visualizing the entire store shelves with a proprietary advanced image recognition technology. This system saves sales staff the trouble of visiting stores and checking stockout. Global consumer goods makers, including Nestle and Coca-Cola, have been signing up with Trax, with the company now analyzing 260 million products per month.

Product image recognition requires much more advanced technology than that for human face recognition, as the shape, material, color and size of products vary more widely. It can be said that Trax, a trailblazer in the field, is a company suited to the tastes of Son, who has firmly backed the Artificial Intelligence revolution. Justin Behar, CEO of Trax, told Nikkei that SVF 2 became its top shareholder with the investment made in April. "We see strong potential for collaboration with SoftBank, which has a lot of experience investing in on-demand workforce, especially in the context of our market solutions powered by our computer vision and AI technologies," he said.

Trax is not the only one that SBG has invested in recently. The group invested in the PatSnap patent search and analysis platform in March and the Carro used car sales platform in June through SVF 2. Both PatSnap and Carro are based in Singapore and their strength is in the advanced use of AI. For example, Carro, whose founder and CEO Aaron Tan is a programming specialist, has hired a nuclear scientist specialized in ultrasonic waves. The aim is to develop an AI system that can differentiate the engine sounds of used cars and spot any anomaly in an instant. The latest round of fundraising, in which SVF 2 took part, has turned the two Singapore companies into unicorns. 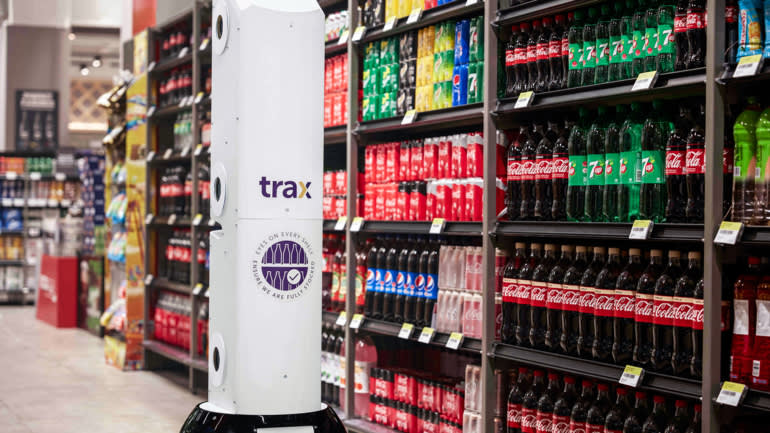 Trax has image recognition technology that can visualize an entire retail store's display shelves, allowing it to keep track of product shortages and inventory levels. (Photo courtesy of Trax)

A primary example of SBG's early investment success in Southeast Asia is the ride-hailing group Grab. According to documents released by Grab, SBG started investing in the company from its fourth funding round (a total of $250 million) in December 2014, the third year since its founding. It also participated in Grab's sixth round of funding (a total of $790 million) in September 2016, a seventh round of funding ($2 billion) in July 2017 and an eighth, the latest ($6.2 billion). Grab is set to go public on the U.S. Nasdaq stock market by the end of this year through a merger with a special purpose acquisition company, with the listing is expected to value the company at nearly $40 billion. SBG holds 21.7% of Grab's common stock and can count on a huge gain if it sells this in the future.

Grab's corporate value has expanded considerably from the time when SBG made the first investment, but the company has continued to struggle with a massive deficit. The deficit between 2018 and 2020 totaled $9.2 billion. There is almost no other investor than SBG that would have continued to accelerate investment in a startup that posted a deficit of about 1 trillion yen in the past three years, rather than thinking twice about putting more money in. To put it another way, Grab was able to boost its corporate value to nearly $40 billion in less than 10 years since its founding, precisely because it had an investor like SBG.

The Japanese group has been serving as an incubator for Southeast Asian startups, which are less mature than U.S. and Chinese startups and attract fewer investors, by giving them a boost of energy to become unicorns. 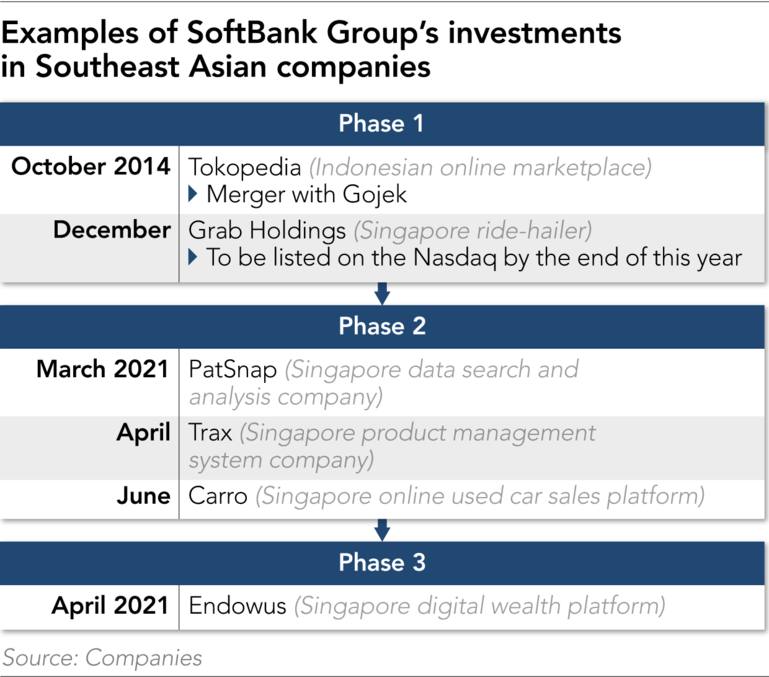 SBG also invested in the Indonesian online marketplace Tokopedia in 2014, the same year it invested in Grab. Tokopedia is set to merge with the leading Indonesian ride-hailing company Gojek. The result, GoTo Group, is expected to be valued at about $18 billion. For SBG, 2021 will be something of a harvest time for the Phase I investments it made in Southeast Asia and will mark a period to accelerate investment in promising startups like Trax, which is following in the footsteps of Grab and GoTo Group.

SVF 2 has been making investment decisions at a pace of nearly one company per day and also accelerating investment outside Southeast Asia. Asked about concerns that quick investment decisions may lead to softening the check and increasing the risk of failure, Greg Moon, managing partner, Asia, Softbank Vision Fund, said: "If we picked up the opportunity yesterday and decided today, that's a problem. But I've watched Carro for four years. I met Trax two years ago and I have continued to check their progress." Carro, whose founder and CEO is Aaron Tan, received investment from SoftBank Vision Fund 2 in June. (Photo by Takashi Nakano)

Moon met Carro's founding members when he was the president of Softbank Ventures Korea (currently SoftBank Ventures Asia). At that time, Southeast Asian startups were mostly service companies that had nothing to do with cutting-edge technology. In those conditions, Tan and other founding members' advanced knowledge about information technology stood out. As an investor in the startup at its early stage, Moon has continued to provide support to Carro's business expansion in Southeast Asia while at time serving as the brake on a management team that could be prone to make hasty decisions amid their eagerness to achieve quick growth.

SVF, which investments globally, has an information network which is also helping find investment targets and improve risk management. SBG has invested in a total of four used car sales platforms, one of which is Carro, through SVF 1, SVF 2 and its Latin America Fund. These companies do business in different regions and therefore there is no direct synergy between them. But Moon said: "Throughout the process of investment review, we gain a lot of information and knowledge. It increases our level of confidence to make investment in this area." Tan, Carro CEO and founder, also said: "I know most of them pretty well. It's a learning experience."

According to Moon, in Southeast Asia, were there is a population of 650 million people, vehicle ownership stands at less than 10% and online trading accounts for less than 1% of the total used car sales. The region has ample room for growth compared with developed countries and will likely benefit greatly from the knowledge of leading companies in the industry such as AUTO1 Group, a German company which went public in February 2021 and in which SVF invested.

Given the digitalization of retailers' product information by Trax and patent data analysis by PatSnap have not yet fully spread in the global market, SBG considers these unicorns to have huge growth potential. SBG is also in search of the next generation of startups. In April, Endowus, a Singapore-based digital wealth platform and investment adviser for individuals, raised funds totaling 23 million Singapore dollars ($17 million) from SoftBank Ventures Asia and other investors. The company does not receive any commissions from management companies and charges commission only to individuals, specifically 0.05-0.6% of outstanding assets under management per year, with the belief that the business prioritizing high-commission financial products is not beneficial to individual investors.

The commission does not increase much in the short term but "SoftBank is very long-term thinking," said Gregory Van, CEO of Endowus. "We can continue to do what is right and change the industry, partially because we have the backing and the belief from some of the most respected investors in the world, such as Softbank." On July 7, Endowus said the assets for which it provides advice exceeded 1 billion Singapore dollars in less than two years since its founding.

Now that SVF has become larger and invested in a greater number of companies, the risk caused by global political and regulatory trends is increasing. Recently, the Chinese government has tightened its grip on the leading Chinese ride-hailer Didi, which is listed in the U.S., with SBG's share price falling as it had invested in Didi via SVF. If stricter regulations from Beijing continue for an extended period, Southeast Asian startups, which have remained relatively unaffected so far by the rising tension between the U.S. and China, may become a destination for investment money looking to hedge China risk. Son has said he wants to invest in 500 companies and it makes one wonder how many Southeast Asian companies will be included on his list of investment candidates.