SINGAPORE -- The center of gravity in Southeast Asia's digital economy is shifting away from big metropolises as small cities and rural areas have begun to attract the attention of startups seeking rich opportunities for further growth.

According to a new report released Thursday by Google, Singapore's Temasek Holdings and U.S. consultancy Bain & Company, the region's internet economy -- the aggregate market size for five digital sectors such as e-commerce and ride-hailing -- is expected to reach $100 billion this year and $300 billion in 2025.

The 2019 figure translates to 3.7% of gross domestic product, and the 2025 total to 8.5%. The market remains relatively small, but "Southeast Asia is closing the gap with developed markets like the U.S., where the Internet economy had made up 6.5% of the GDP in 2016," the report says.

Southeast Asia's digital economy began taking off around 2014 along with smartphone penetration and the amount of funds startups could raise. Most of the growth happened in big cities like Singapore, Jakarta and Bangkok, where infrastructure -- from logistics facilities to transportation networks to internet connections -- was in place and where inhabitants earned more than rural residents.

One of the report's key findings, however, is that the internet economy is expanding beyond these bustling burgs to smaller communities, where consumer services are quickly becoming part and parcel of the digital realm.

"As we close the access gap and as companies focus on logistics and infrastructure outside of metros, we see an immense opportunity coming from the non-metro areas," Stephanie Davis, managing director for Google Southeast Asia, said during a news conference on Thursday. 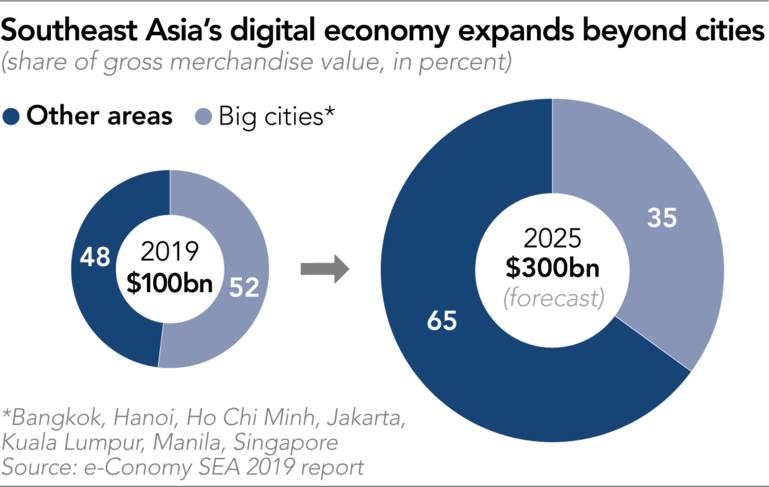 According to the report, areas outside of the region's seven "metros" -- Bangkok, Hanoi, Ho Chi Minh City, Jakarta, Kuala Lumpur, Manila and Singapore -- this year will account for an estimated 48% of their countries' combined gross merchandise value, a yardstick that is often used to measure how well e-commerce businesses are doing.

From 2019 to 2025, the gross merchandise value of these Southeast Asian countries will quadruple but only double in the seven metros. This means the smaller cities and rural areas will account for nearly two-thirds of the region's digital economy in 2025.

"There are clear signs that internet economy players are investing to develop their businesses beyond metros in search of further growth," the report says.

Indonesian unicorn Tokopedia, the country's most-visited e-commerce site, in August announced its intention to "go rural" and signed a memorandum of understanding to develop "digital villages" in partnership with the administration of West Java, according to local reports.

A month later, ride-hailer Grab launched Grab for Good, in which the company plans to offer digital literacy and other programs to local communities. Grab said it aims to build an "inclusive platform" for all Southeast Asians. Other digital players are also stepping out of the big city. In countries like Indonesia and the Philippines, e-payment and other fintech platforms are targeting the vast numbers of underbanked and unbanked citizens, bringing loans, insurance and other financial products to people who typically live in rural areas.

The report says people living in areas outside of big cities will benefit big from rapid digitization. "They will be able to buy products online that are not available in nearby stores at competitive prices," it says. "Or they can book flight tickets and accommodations with just a few clicks when they want to visit their relatives without having to go down to travel agencies located far from their homes."

In the cities, where markets are becoming more competitive, "user engagement" is becoming more important than user acquisition as service operators focus on monetizing their base, the report says.