Spiber, known for making fibers inspired by spider silk, is employing a combination of new-share issuance and a value securitization scheme backed by such intangible assets as intellectual property. It announced the capital increase Wednesday.

The amount exceeds the 31.6 billion yen raised by the company in all of 2020, according to data provider Startup DB. The new funds will go toward an American factory.

Carlyle is one of eight investors purchasing shares via private allotment, including the public-private Cool Japan Fund. Carlyle and the fund will each install one director on Spiber's board.

The funding round brings Spiber's market value to 139.7 billion yen, placing the startup firmly in unicorn territory along with Japanese peers Preferred Networks, SmartHR and Paidy.

Carlyle's purchase of a roughly 7% stake through a Japan-focused buyout fund makes Spiber the 28th company here that the private equity firm invests in -- and the first Japanese startup.

Carlyle will connect Spiber to potential overseas business partners. The private equity firm will also lend a hand in an initial public offering.

Spiber develops and sells Brewed Protein, a material made through a proprietary process. Microbes are fed saccharides from sugarcane and produce the protein via fermentation.

Spiber is gaining attention for its contributions to sustainability. Unlike polyester, nylon and other petrochemical fibers, Brewed Protein is biodegradable and reduces greenhouse gas emissions.

Brewed Protein can be made into various types of apparel. Multiple brands, such as The North Face, has adopted the product for their clothing. Spiber is developing artificial hair and exploring applications for synthetic meat.

Spiber is preparing to mass-produce its material for the overseas market with the help of Carlyle's experience and connections. In the U.S., Spiber has teamed up with corn processor Archer-Daniels-Midland to construct a Brewed Protein plant. Mass production is due to begin in 2023 at the earliest.

The American operations will play the role of boosting price-competitiveness. A new plant in Thailand, which is expected to go into full operation by year-end, will keep the supply price to as low as $100 per kilogram. 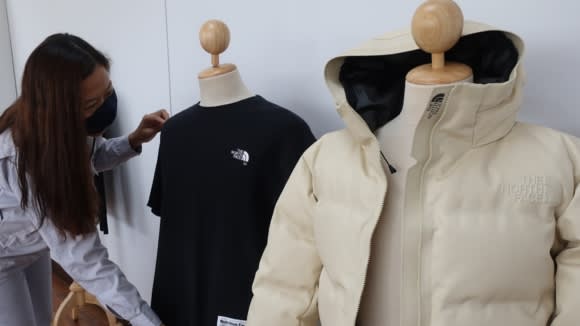 Spiber has developed jackets and other apparel with Goldwin, which sells The North Face brand products in Japan. (Photo by Marimi Kishimoto)

Once the U.S. facility goes into operation, "we'll ultimately need to go down to $10 to $20," Sekiyama said. Chemical-based fibers cost as little as $1 to $2 a kilogram.

Spiber also faces the challenge of touting the fiber's environmental friendliness. The startup does not disclose how much carbon dioxide is emitted in its manufacturing processes. This precludes direct comparisons with petrochemical fibers and limits Spiber's ability to promote itself to clients.

"There needs to be quantification, even if it requires a certain amount of investment," said Yosuke Yamamoto, partner at Universal Materials Incubator. The Tokyo-based investment firm purchased a stake in Spiber this June.

"We've begun a review through a third-party firm," Sekiyama said. Spiber is thinking about releasing disclosures in line with the start of operations at the Thai plant.

Whether the American plant launches on schedule will have implications for Spiber's goal to move into the black. The company recorded a net loss of 6.5 billion yen for 2020, widening from the year-earlier 5.2 billion yen in red ink.

Turning a profit will hinge on mass production. Spiber's fundraising over the past year amounts to some 65 billion yen, including the latest round. The company will likely face investor pressure to turn in commensurate results.

Only a few Japanese startups can raise large amounts of funds, take risks, and grow into expansive operations. As money flows to Japanese startups from overseas markets awash with funds, Spiber will serve as a test case of whether such businesses can demonstrate high growth potential.