BANGKOK -- A chain of pay public toilets has emerged as a major winner amid the COVID-19 pandemic in Thailand. The facilities are operated by Mister Loo, a Swiss startup that aims to become the "Starbucks of toilets." With public awareness of hygiene growing as the deadly virus spreads, the operator of upscale toilets is winning popularity in Southeast Asia by emphasizing their cleanliness.

"It's very clean, and there is no bad smell. It's worth spending 10 baht (33 cents)," Chanyarot, 48, said, after using a restroom operated by Mister Loo in a shopping mall in Bangkok's Chinatown. The wood-paneled booth is well air-conditioned, with popular Thai music playing in the background. A fragrant aroma fills the room.

On average, pay public toilets in Thailand, including those in tourist resorts, cost about 3 baht per use. Mister Loo charges 10 baht for air-conditioned "premium" toilets and 5 baht for regular ones. In the Chinatown mall, there are free toilets on another floor, but many choose Mister Loo.

Mister Loo originally targeted tourists from abroad, but the number of foreign visitors has fallen due to pandemic-related entry restrictions. Still, its popularity among local users has more than made up for the decline in foreign users, and the company's sales for 2020 topped those of the previous year.

The main appeal of Mister Loo toilets is their cleanliness. Using a special cleanser, attendants disinfect stalls after every use. In the premium stalls, most fixtures and equipment -- from the flush button to the sanitary bin to the soap dispenser -- are controlled by sensors, so users can do their business without touching any of them.

Every attendant receives training in toilet cleaning, while the company keeps close tabs on feedback that customers can file using QR codes displayed at each facility. 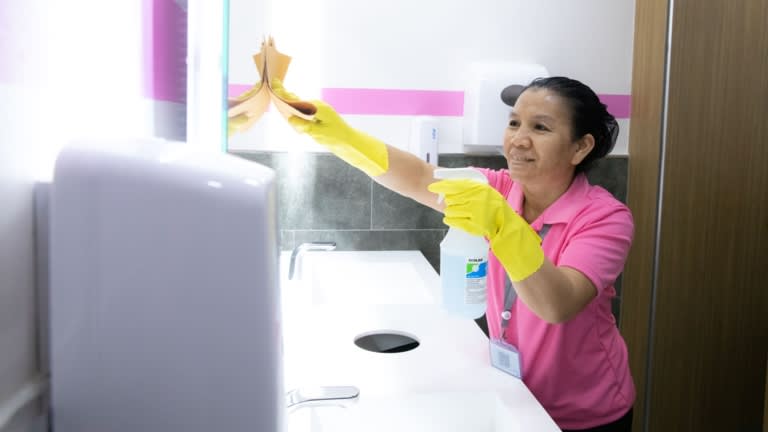 At Mister Loo, attendants clean toilet stalls after each use.

Mister Loo was founded by Dominik Schuler and Andreas Wanner, former corporate and investment bankers at the Swiss-based UBS. The company has raised about $2.8 million since its founding in 2015 and now operates in 40 locations in Thailand and two in Vietnam. It is advancing plans to set up similar facilities in Indonesia and the Philippines.

"Based on the untapped market potential and through collaborations with business partners, Mister Loo targets to expand its current portfolio from 42 locations to 1,400 locations by 2025," Schuler said. "To finance this growth, Mister Loo is in the process to raise $10 million."

In Thailand, about 12,000 people use Mister Loo toilets each day. Its founders said that unclean toilets are no longer tolerated and that the company has been a clear winner amid the pandemic.

"It is important to build up an outstanding brand reputation in order that customers are aware of the premium service and business excellence offered at each location. Thus, Mister Loo wants to become the Starbucks in the toilet industry," Wanner said.

Mister Loo offers relaxation spaces at some of its high-end facilities where users can also check their health indicators like blood pressure and body fat. "(Those) customer lounges offer services beyond pure toilets and will be developed into e-health centers contributing to public health," Schuler said.

Making hygienic toilets widely available has been a global challenge. The share of the world population with access to hygienic toilets rose from 28% in 2000 to 45% in 2017, but 4.2 billion people still lack them, according to UNICEF.

As demand for such facilities increases to prevent the spread of contagious diseases, business opportunities also are opening up for such enterprises as Mister Loo.