Significant opportunities for funders of all sizes and stripes 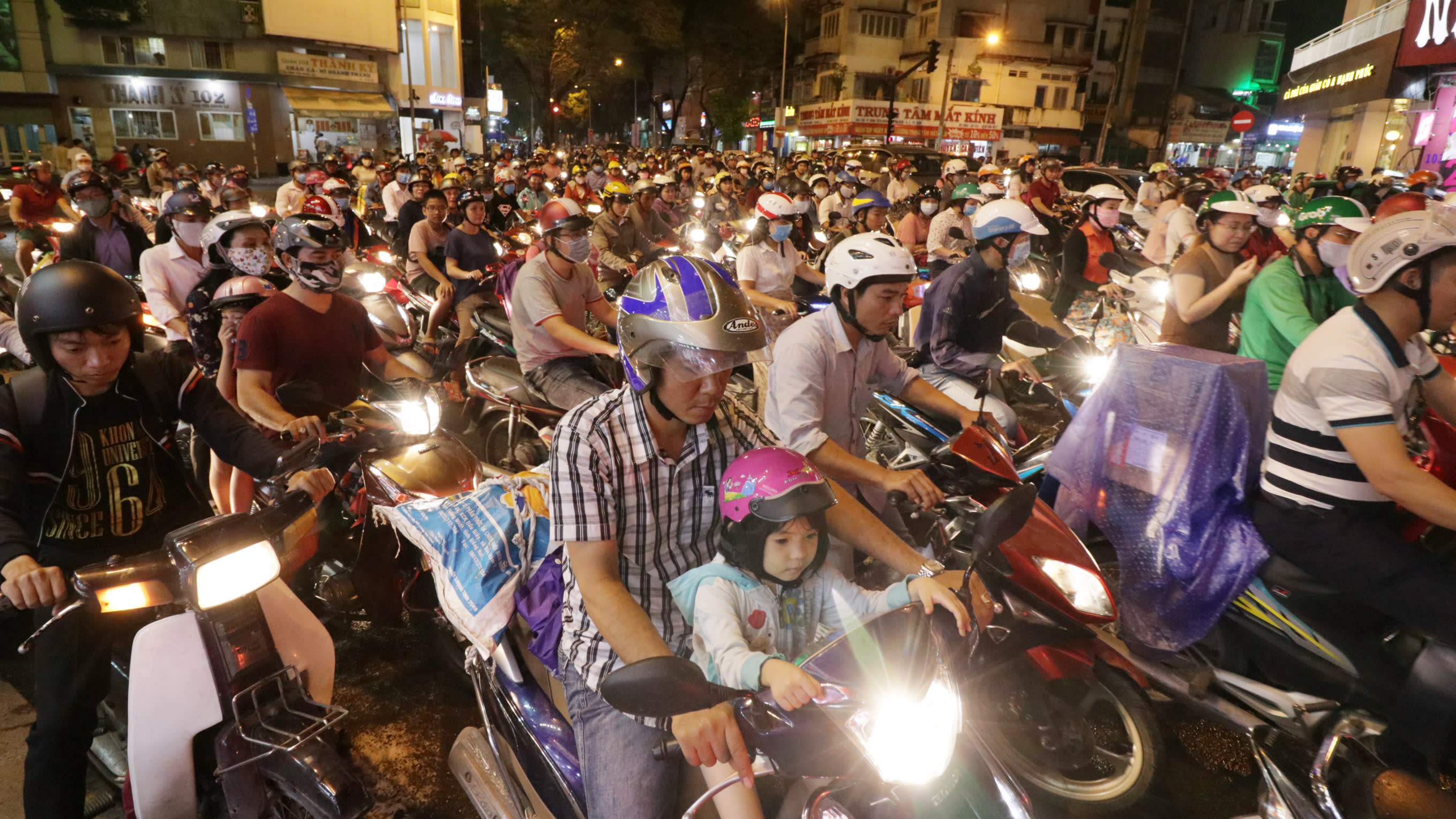 HANOI -- Kosmo, the latest highrise residential and commercial development in Bac Tu Liem District, a new, upmarket suburb west of Hanoi, is approaching completion. One Friday afternoon, Thanh Thuy, a 38-year-old resident, steps out of a street-level cafe to receive a parcel from green-uniformed Giaohangnhanh deliveryman. Thuy has no wallet.

"I only bring my smartphone when I'm out these days," she said.

Thuy is among millions of middle-class Vietnamese consumers for whom e-commerce has become an indispensable part of daily life. "The transformation from cash-on-delivery to a cashless economy is one of the biggest opportunities in Vietnam," said Eddy Hong, chief executive of Nextrans, a Korean investor in the cross-border remittance company Payway.

Vietnam has a population of nearly 100 million people, roughly 70% of whom are under 35, and boasts an annual GDP growth rate of nearly 7%. Arguably the hottest market in Southeast Asia in 2019, Vietnam has enjoyed a surge in investors keen to ride the growth.

Yotaro Tokuo, a principal at Japanese private equity firm Advantage Partners, sees Vietnam as one of the most attractive propositions in the region. "The economic stage has hit an inflexion point to attract international investors, [while] still possessing ample room for further rapid growth, and regulations and the culture are well opened to foreign direct investments," he said.

Internet infrastructure has been developing fast, with 148 per cent mobile penetration and high use of mobile services, according to GSMA Intelligence, which tracks mobile operations globally.

The tech sector has seen a surge in private equity activity. In 2018, there was a $50-million investment by Northstar Group in the Topica Edtech Group. According to DealStreetAsia, aggregate foreign investment in the past 12 months was around $500 million. Notable deals included included Warburg Pincus's financing for e-wallet MoMo; and SoftBank and Singapore sovereign wealth fund GIC investing around $300 million in VNPAY, a digital payment platform.

"At the regional level, we already see top private equity having increasing levels of exposure to this space," said Khanh Tran, a partner at VinaCapital Ventures, the tech investment arm of asset management firm VinaCapital. "Tech is very much a borderless space where regional players can get exposure in the Vietnam market much more easily than via traditional brick and mortar industries, so local PE houses will soon feel the competition right on their own turf."

It was also a busy year for fund managers. The largest Vietnam-focused vehicle in the market is Mekong Capital's Mekong Enterprise Fund IV, which has a $250 million hard cap. Other funds are being managed by Excelsior Capital Asia, ACA Investments, DT&Investments and FEBE Ventures. The latter two are tech focused.

Some private equity companies that usually favor more traditional investments might be eyeing Vietnam's tech scene. "We do look at selective tech investments, which we believe are growing aggressively in Vietnam," said Tokuo of Advantage Partners.

Most of 2019's new capital was funnelled into e-commerce, fintech and logistics. The size of Vietnam's e-commerce market in 2019 was $4.6 billion, and this is expected to reach $23 billion by 2025, according to the e-Conomy SEA 2019 report by Google, Temasek and Bain.

Vietnam is nevertheless still in the very early days of the e-commerce, according to JJ Ang, CFO of Ho Chi Minh City-based marketplace Sendo. "There's still a lot of cultivation of online shopping for Vietnamese people to be done] for which Sendo together with fellow players and smaller vertical companies are creating an ecosystem which keeps on growing," he said.

Within the past year, Sendo and Northstar Group-backed Tiki alternated as the second most visited e-commerce site in the country behind Sea Limited's Shopee.

Given the large room for growth, the sector is expected to attract even more capital, and this is likely to come mainly from deep-pocketed players. Ang said having strong financial investors has helped Sendo gain exposure to the region. Sendo recently snapped up $61 million in its series C round, following an earlier $51-million funding in 2018. In tandem with the e-commerce boom, funding has also been strong in logistics, although significant investment is still needed in infrastructure development such as to connect the ports with warehouses and logistics centre.

There are plenty of other opportunities. According to Linh Pham, founder and CEO of trucking platform Logivan, the fragmentation and inefficiencies of traditional sectors have provided openings for startups to disrupt and emerge, just as elsewhere in the world. In 2018, Logivan and its rival EcoTruck secured $3.5 million in total investments, according to public data.

In 2019, there were 10 deals in startups in the last-mile delivery, on-demand service and logistics management system sectors. Among these was Temasek's funding for Scommerce's units Giaohangnhanh and AhaMove. Total funding was not disclosed, but DealStreetAsia understands it was in the region of $100 million.

In anticipation of the expected growth in e-commerce transactions, Scommerce has started construction of a second automation storage facility capable of handling "record capacity" for Vietnam of 40,000 orders an hour.

"The increased investment in logistics, especially e-logistics or last-mile logistics, has gone in tandem with the growth and investments in e-commerce," said Jack Nguyen, head of GrabExpress Vietnam. "E-logistics is very important for e-commerce because it interacts directly with end customers."

Grab's on-demand courier service has already integrated last mile delivery provider Ninja Van into its platform for Indonesia and the Philippines, and plans the same for Vietnam soon. Meanwhile, Hong Kong-based GoGoVan has set up an office in Vietnam and is preparing for a 2020 debut.

Fintech has also been booming. In 2019, Vietnam ranked second regionally for investment, accounting for 36% of total fintech investments in Southeast Asia, after Singapore's 51%, according to a recent report by United Overseas Bank.

Vietnam's mobile payments market is meanwhile projected to reach $70.9 billion by 2025 -- a huge increase from $16 billion in 2016, according to UOB. The largely unbanked population and high mobile penetration are significant investor lures.

"Fintech is increasing productivity, while the traditional banking system is not efficient," said Jeffrey Seah, a Quest Ventures partner. "Big corporates have not been able to develop fintech fast enough."

While payment deals dominated the funding landscape in terms of value, the overall number was also spread across alternative lending, personal finance, investment tech, blockchain and finance, and accounting tech sub-sectors. Indeed, some investors are considering the potential of more integrated fintech ecosystem.

"We have seen various business models in Korea that could be more meaningful in Vietnam," said Martin Kim, deputy director of Shinhan Future's Lab Vietnam. "The ecosystem we're trying to build is not only for startups, but one corporations and SMEs can also join as they want to develop their fintech platform."

"The e-commerce, fintech and logistics industries will continue to grow dramatically, since they are the backbone of the Internet economy," said Vy Le, ESP Capital's general partner, who sees many openings for enabler products in these industries. "This is a promising ground where new startups can look for new opportunities, instead of competing head-to-head with big companies."

However, recent big funding rounds have put some investors on guard. Well-funded businesses like WeWork and Uber exposed investors to substantial losses when their valuations plummeted.

"After the WeWork shock, we have also noticed some Vietnamese companies running out of cash," said Nguyen Hoa Binh, chairman of NextTech Group and Next100 fund. "I think investment appetite will ease and prioritize models using cashflow effectively, or already profitable startups."

Le was more positive. She said many Vietnamese startups have been undervalued compared to others in the region. "We cannot deny the fact that many startups are receiving larger funding rounds than before, which I believe is the adjustment [to reflect] their real value," she said.

Rising valuations could limit the options for smaller investors, but many industry players are optimistic that Vietnam's young tech ecosystem will continue to throw up opportunities. "Everything is transforming in Vietnam, so there's a big chance here," said Hong of Nextrans. The firm has spread its investments across B2B, e-commerce, marketing, rentals, and recruitment.

Kaizenvest, an education-focused private investment company has made one of its first forays outside India in Vietnam. In July, it invested $10 million into YOLA, a Vietnamese English-language training provider.

"The growth rate of the education sector in Vietnam is probably one of the highest in the region," said Raj Shastri, a Kaizenvest partner. "We have realized that there is a need to introduce technology-enabled learning in the existing delivery models of education institutes, and hence we are also looking for education technology players,"

Quynh Nguyen contributed to this story.