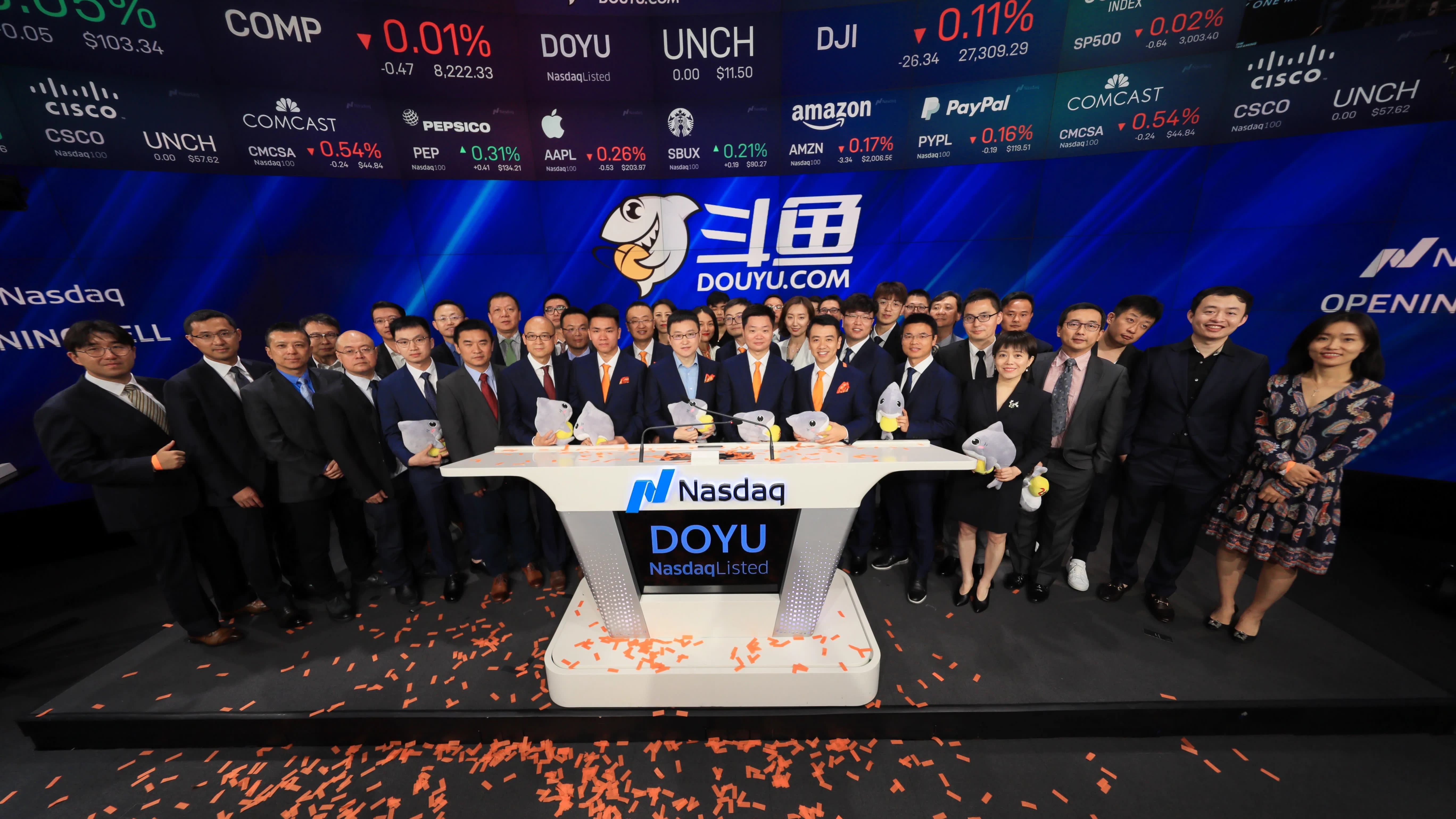 Tencent-backed Douyu stumbled on its first day of trading on the Nasdaq before climbing back up to its initial public offering price. (Photo courtesy of Nasdaq)

NEW YORK -- Douyu, the gaming-focused streaming platform backed by internet giant Tencent Holdings, had a lackluster debut on the Nasdaq Wednesday after a $775 million IPO -- the largest by a Chinese company in the U.S. this year.

The Wuhan-based company closed its first day of trading on Wall Street at $11.50 per American depositary share, matching its initial public offering price. Shares opened at 4% lower Wednesday morning after being priced at the low end of the expected range. The IPO values Douyu at roughly $3.7 billion.

"Today marks an important milestone in Douyu's development," the startup's Chief Strategy Officer Su Mingming said. "Going forward, we will continue to focus on improving our operations -- our user traffic, user activation and revenue growth -- to generate value for our shareholders."

Douyu filed in April to raise $500 million but lifted its fundraising target after moving into the black in the first quarter of 2019. It recorded a $2.7 million profit on $221.9 million revenue in the first quarter, after losing $130.6 million last year, according to its updated prospectus filed to the U.S. Securities and Exchange Commission last week.

"While we have always prioritized growth in user traffic, in the past couple of years we have also placed a focus on growing our revenues," Su said. "We continue to explore monetization models applicable to esports livestreaming."

Douyu and local rival Huya, both claiming to be the No. 1 player in esports streaming in China, are often compared with Amazon-owned Twitch. But while Twitch runs mostly on advertising and subscriptions, the two Chinese platforms primarily generate revenue via digital tips from viewers to streamers.

Chinese gaming giant Tencent is majority shareholder of both Douyu and Huya. The latter is listed on the New York Stock Exchange.

Douyu, a relative latecomer to the livestreaming scene, prides itself on exclusive contracts with some of China's top streamers, who have helped the platform garner nearly 160 million monthly active users, including 6 million paying viewers.

Douyu timed its IPO for this month to take advantage of a favorable market window following the resumption of trade talks between Beijing and Washington after the Group of 20 summit, the Financial Times reported, citing a banker who worked on the offering.