WeWork halts China expansion as it struggles to fill offices NEW YORK -- After a delayed initial public offering and the resignation of co-founder Adam Neumann as CEO, WeWork has put its expansion plan on hold in China.

New locations will open into 2020, but expansion plans for 2021 have been halted, according to people familiar with the matter.

The move is the latest setback for a company that has been struggling to allay concerns from investors over corporate governance and the sustainability of its business model. The halted expansion also gives the company's smaller competitors a chance to increase their footprint in what is set to become the coworking space industry's biggest market.

China, which was mentioned in parent We Company's prospectus 173 times, has been a growth center for WeWork. Through its joint venture ChinaCo, the startup has opened WeWork offices in 125 buildings across 12 cities since its debut there in 2017.

China accounts for 15% of WeWork's total locations. The greater China region brought in $99.53 million in revenue in 2018, ranked third behind the U.S. and the U.K., according to the fillings.

But as the country's economy cools and competition in the coworking space market intensifies, the rapid expansion has begun to bite.

WeWork China pays expensive rents to operate buildings in prime locations in major cities. The company needs to reach an average occupancy rate of at least 65% to break even, but in some of the newer buildings, such as those in Shenzhen, China's Silicon Valley, WeWork only has 30% to 50% of the space filled up, people with knowledge of the operations told the Nikkei Asian Review.

China is on its way to become the largest market for coworking space, reaching roughly 167 million sq. feet in 2018 compared with 37 million sq. feet in 2016, according to a report published by Qianzhan, a Chinese industry research company. The top-rated office rental companies include Ucommune, WeWork China, Nash Space and Kr Space.

But with the economy slowing, WeWork's prices seem less favorable than some local competitors, who offer much lower rates.

Coworking space companies usually offer a few tiers of memberships -- hot desks, dedicated desks, private offices, office suites and customization. Hot desks members have access to shared workspace and floating seating. Dedicated desk members have their own dedicated desk where they leave their belongings. Private offices and office suites are more expensive and some small startups rent suites for their teams. Customization is usually for enterprise clientele, who may have over 500 employees.

Although WeWork offers a more premium product, the cheaper alternatives can be more appealing to customers short on cash -- especially in a slow economy. Competitors' low prices have leveraged against WeWork China in negotiations and pushed WeWork to focus more on customized offices for enterprise clientele, according to people familiar with the matter.

Some startups have watched WeWork bleed cash and have adjusted their strategies.

Kr Space, founded in 2016 and based in Beijing, has reportedly closed down locations and walked away from a preliminary agreement to lease in ChinaChem's One Hennessy in Hong Kong due to financial concerns. But Kr Space succeeded in raising $145 million earlier this year from IDG Capital, Gopher Asset Management and Hubei Yixing Capital, according to Mingtiandi, an Asia real estate intelligence publication.

"For the first two years, we were similar to WeWork, in that we rent the space from landlords and made them into coworking space for our customers. But during the fourth quarter of last year, we thought that the business model was too demanding on cash flow and funding, as well as having too much financial risk," Liu Chengcheng, founder and chairman of Kr Space, told the Nikkei Asian Review. "Especially now that we've seen what happened to WeWork, we think we made the adjustment just in time."

Liu said his company shifted its focus more on enterprise clients who have offices nationwide. Kr Space helps clients find ideal locations and design their offices, but the clients rent directly from the landlords, which helps Kr Space keep a positive cash flow. The company also opens coworking spaces depending on clients' needs.

Liu also said his business model is client-driven, meaning that he will open a new coworking space location if several clients want to have an office there. He said that WeWork China's expansion was "more CBD-driven," meaning that the company kept signing new leases in central business areas to attract clients.

"It's not that nobody rents at [prime locations] right now, it's just that it pacts much more financial risks to be CBD-driven, which means the company needs a lot of funding to [sustain] it," Liu said. 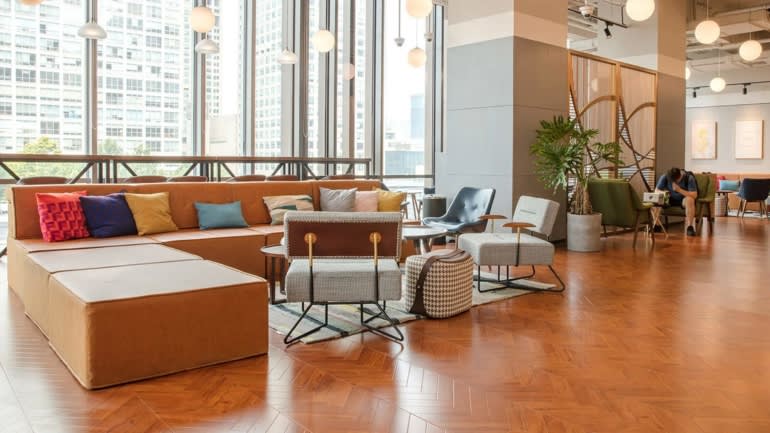 China's slowing economy, which marked a 27-year low 6.2% growth in the April-June quarter, has weighed heavily on WeWork's fortunes there. According to Qianzhan's data, office space sold in 2018 shrank 8.26% to roughly 470 million sq. feet, the first decline since 2014.

WeWork is expected to lay off at least 2,000 employees as soon as this week, roughly 13% of the company's staff, The Guardian reported on Tuesday.

Barry Oxford, a senior analyst focusing on WeWork at DA Davidson, said the company's aggressive expansion was ambitious but lacked a clear vision.

"Adam wanted to rule the world," Oxford told the Nikkei Asian Review. "He was moving very aggressively, which caused tremendous negative cash flow. And that's one of the criticisms the investors had. Where is the clear path to profitability? That wasn't really clear. Not only in my mind, but also in other investors' minds."

Neumann's heavy borrowing and long list of questionable transactions put him at the center of mounting concerns from investors, including WeWork's major backer SoftBank Group. WeWork's aggressive expansion created big revenues but also brought big losses. Although WeWork quadrupled its revenue in 2018 to $1.82 billion compared with 2016, its losses in 2018 also grew to $1.61 billion, according to We Company's prospectus.

Oxford described WeWork's business model as a "classic example of duration mismatch," where the company is bound by long-term liabilities but only relies on short-term revenues. When the economy is unfavorable, small business owners can easily turn to cheaper coworking space providers or work from home to save money, but WeWork remains burdened with long-term leases.

"When the economy is good, a business like WeWork has the wind behind its back, you can see it works very well," Oxford said. "But [when it slows down], the wind comes into their face, they can't cut their liabilities as fast as the revenues might start going away."

WeWork's management team and bankers have been meeting with approximately 60 financing sources over past week and this coming week, according to a WeWork spokesperson. Without an IPO, it is unclear when the expansion in China will be back on the agenda.

Although much smaller than WeWork, Liu is optimistic and confident about Kr Space's prospects.

"Our strategy now is different from WeWork, so we don't really consider WeWork as our competitor anymore, especially after the latest developments," Liu said. "But if WeWork one day closes some locations, I think we will take over WeWork's leases if the buildings fit our needs."