SINGAPORE -- Southeast Asia has attracted a flood of private capital that has underwritten a slew of high-value startups in the region, like ride-hailing giants Grab and Go-Jek. But investors are starting to question the valuations of these highfliers after huge markdowns slammed a number of U.S. startups in their public debut.

Just a day after WeWork operator We Company postponed its IPO after slashing its market value, key players from Southeast Asia's private equity and venture capital firms gathered in Singapore for the two-day Asia PE-VC Summit. Organized by DealStreetAsia, the firms discussed trends and challenges facing the region's startups.

The still-unfolding disaster at SoftBank Group-backed WeWork was a chief topic of discussion, along with the IPO flops of Uber Technologies and Lyft earlier this year. Investors at the summit noted similarities with the high valuations of some cash-burning startups in Southeast Asia.

Commenting on the "ridiculous valuations" of some startups that are "raising billions of dollars," Brahmal quoted Warren Buffett's famous warning to over-investment in untested companies: "It's only when the tide goes out that you learn who's been swimming naked." Brahmal added that "there has to be a shift toward an economic model that delivers profit."

Hans Tung, managing partner at U.S.-based GGV Capital, seemed to concur, pointing out that startup valuation "has come up very, very fast" in Southeast Asia and India. He said his company would be "more selective" in future investments.

Backed by robust economic growth at around 5% annually and a huge market of 650 million consumers, Southeast Asia is seeing unprecedented investment in startups. The amount more than doubled last year from 2017, according to Singapore-based VC Cento Ventures, and the figure will likely increase again this year. One investor at the recent Asia PE-VC Summit noted the "crazy amount of money" invested in Southeast Asian startups over the last few years. (Picture by Kentaro Iwamoto)

Meanwhile, startup valuations in the private capital market are rising, reflecting investor confidence. The vast sums of money at their disposal have spurred some companies to expand rapidly across the region.

The rapid expansion has birthed eight Southeast Asian unicorns -- unlisted companies valued at over $1 billion -- including Indonesian online travel agent Traveloka and SoftBank-backed e-commerce platform Tokopedia. Moreover, there are more than 30 startups valued at between $100 million and $1 billion -- though few have yet to show a profit.

A large part of a startup's valuation depends on investor confidence. It could rise even if a business model is untested, or if there is no clear path to profitability. The WeWork case is a mix of both, a warning to investors that they could lose big if the company's pre-IPO valuation is too high.

"[WeWork and Uber] are reflective of how capital markets view unicorns that have raised unprecedented amounts of private capital without a viable business model," Yinglan Tan, founding managing partner at Singapore-based VC Insignia Ventures Partners, told the Nikkei Asian Review on the summit sidelines. "In the end, however, a sustainable financial model, profitable business and fast growth are still well received, as seen with B2B software-as-a-service companies like [U.S. video conference service] Zoom."

At the event, some startup founders questioned investor obsession with unicorns.

Shashank Dixit, CEO of cloud-based software provider Deskera of Singapore, criticized the current climate where "everybody has to be a unicorn." Dixit said, "We shouldn't [use] unicorns as a measure of respect. A billion dollar valuation is nothing," he said, stressing that building a profitable business is more important.

Top executives from Southeast Asian unicorns are apparently becoming aware of what their growth strategies should be. 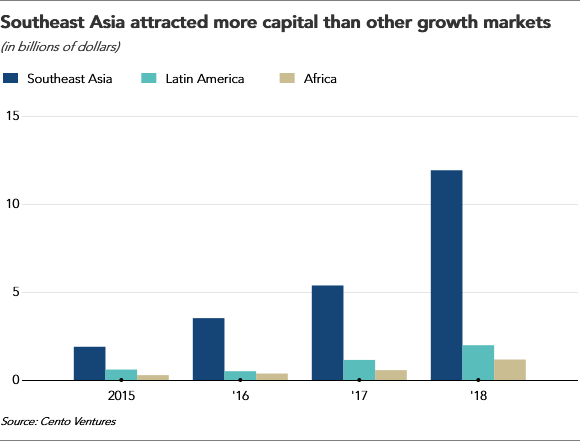 He also noted that Go-Jek will steer clear of the cash-burning, "winner-take-all strategy that some investors and companies have been trying to implement." The Indonesian company is valued at over $10 billion, with Google and Tencent Holdings as key investors.

SoftBank-backed Grab offered a similar view. "What we want to build is an evergreen company that is sustainable," said co-founder Tan Hooi Ling. "Using that as a starting point, in any business that we launch and grow, there is always a clear path to profitability." Singapore-based Grab's $14 billion valuation is the highest among startups in Southeast Asia.

Yet many investors remain bullish on Southeast Asian and Indian startups, and will continue pouring money into what they hope will be the next unicorn.

That being said, a hands-on approach to their investments seems to be the way going forward. "Funds in the region are taking a more active role in helping their portfolio companies grow; going beyond the capital and offering hiring and tech services to address the toughest challenges founders in the region face," said Tan of Insignia Ventures Partners.