Without Saudi support, SoftBank opts to back WeWork directly TOKYO -- SoftBank Group's plan to provide financing for the parent of office-sharing startup WeWork on its own signals a lack of support among Saudi backers of its $100 billion Vision Fund.

The $5 billion financial package, hastily put together under the direction of SoftBank CEO Masayoshi Son, would raise the Japanese tech conglomerate's stake in We Co. without turning it into a consolidated subsidiary. And SoftBank itself will provide the support, not the SoftBank Vision Fund. The two have already invested more than $10 billion in the company.

"The financial support is not a rescue," a SoftBank executive said. "It is purely because we determined that We will once again return to the pathway to growth."

Yet if the WeWork business were expected to grow and generate returns, an infusion from the Vision Fund would be the leading option. SoftBank's decision suggests that it could not persuade fund backers, such as Saudi Arabia's sovereign wealth fund.

Vision Fund investors previously balked at what would have been a $16 billion infusion into WeWork. The negotiations came against the backdrop of a technology stock sell-off. The investment, sealed early this year, was scaled back to $2 billion.

SoftBank's injection into We Co. would increase its total exposure to about 1.5 trillion yen ($13.8 billion) from roughly 1 trillion yen. This elevates the risks shouldered by SoftBank taken alone.

"We constantly assume management risk with investment targets, but we never anticipated this type of development," said a SoftBank insider.

Son's investment strategy creates a loosely assembled "herd" of companies, centered around limited stakes of 20% to 40%. This underlies the arrangement under which We Co. would not be turned into a subsidiary. But with the Vision Fund focusing on unlisted unicorns worth over $1 billion, outlays tend to be larger with more promising companies. 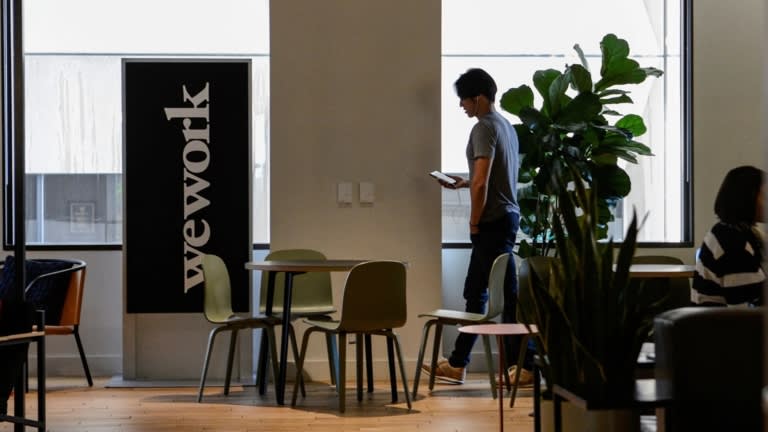 SoftBank Group is preparing a $5 billion financing package to help get WeWork back on its feet.   © Reuters

With We Co., SoftBank is increasing its bet in a startup in a way that complicates an exit strategy. At the same time, the group faces the difficult balancing act of maintaining the company's independence.

The financial support also raises a predicament about how SoftBank should value We Co. A normal investment would minimize the valuation to maximize returns. But a low valuation would inflate the valuation loss of past investments.

We Co.'s valuation, once reaching $47 billion, has slipped below $20 billion. The plunge is expected to slash profit at SoftBank's investment fund operations for the July-September quarter or push them into a loss.

SoftBank can ill afford such an outcome, especially considering how Uber Technologies and business chat provider Slack Technologies have struggled after listing this year.

Among unlisted targets, Singaporean ride-hailing startup Grab faces questions over becoming profitable. ByteDance, the Chinese owner of the TikTok viral-video app, is weathering calls from U.S. Sen. Marco Rubio to undergo a review by the Committee on Foreign Investment in the United States over alleged censorship for the Chinese government.

SoftBank announced this summer the Vision Fund 2, with a goal of raising $108 billion. And while company officials maintain that investor interest remains strong, the mounting challenges cast a pall.