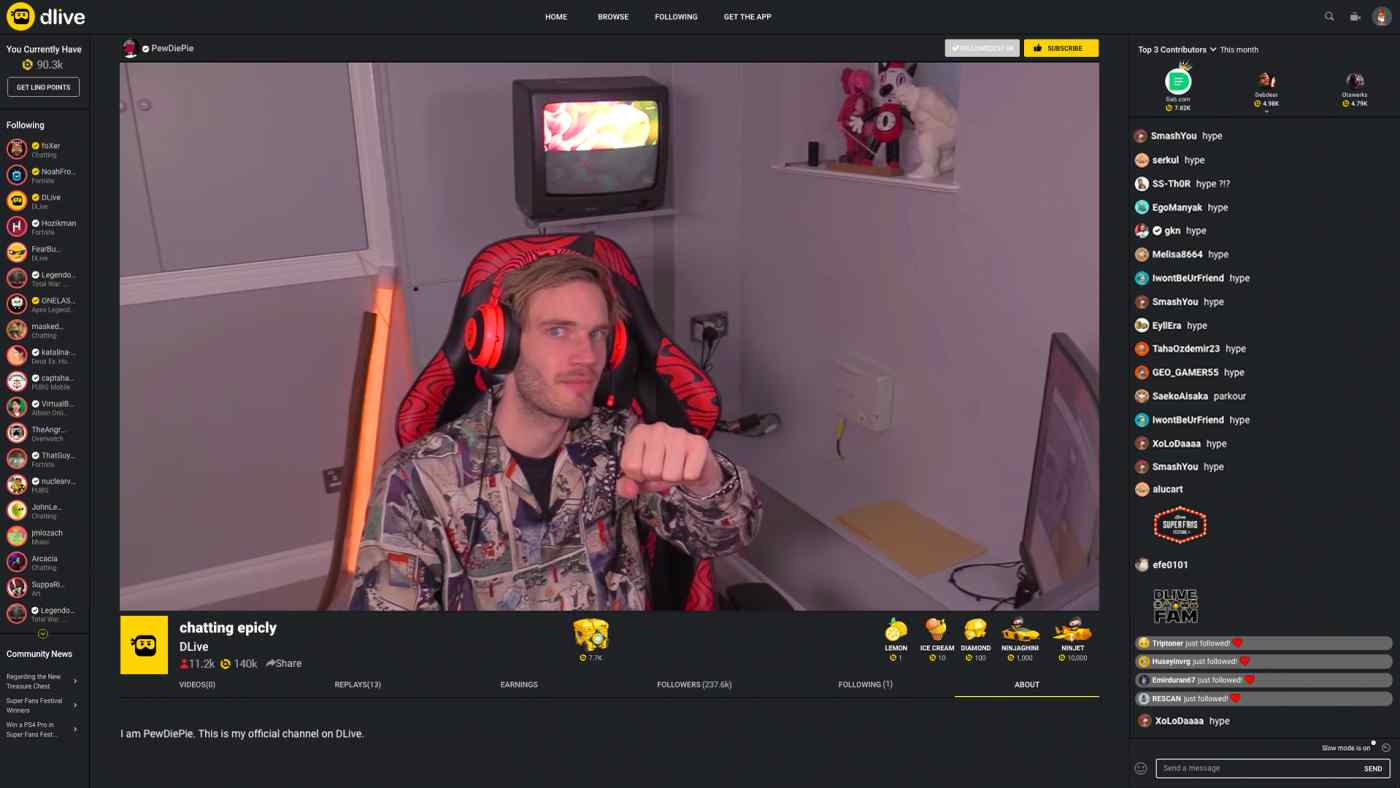 PALO ALTO, U.S. -- The livestreaming platform DLive is seeking to become the second Chinese-led tech company to topple an American giant as it aims to snatch the top spot from Amazon-backed Twitch in the up-and-coming industry.

Inspired by the Chinese video sharing app TikTok surpassing Facebook earlier this year as the world's most preferred social networking app in terms of downloads, Chinese-born and American-educated founders Charles Wayn and Cole Chen, have set high goals for DLive.

They may have found their trump card after recently signing PewDiePie, YouTube's biggest star in terms of followers, to use DLive as his exclusive streaming platform. PewDiePie, whose name is Felix Kjellberg, is best known for his gaming-commentary videos, boasting more than 93 million subscribers on YouTube.

With the boost from PewDiePie joining the platform, DLive currently has more than five million monthly active users, a 67% jump from March with over 70,000 streamers on the platform. But Wayn and his team have something bigger planned for this little-over-a-year-old company: to overtake top livestreaming platform Twitch, which currently has 2.2 million daily broadcasters and 15 million daily viewers on average.

Watching people play games online is a $10 billion industry and one that is growing fast.

"It would be a lie to say we knew what we were doing when we started out, but we knew this will be something huge," Wayn told the Nikkei Asian Review.

DLive brings two new aspects to the streaming business. First, DLive does not take a cut from the revenue that the content creator, such as the person who streams playing games online, generates from their followers. Fans usually offer virtual gifts to the creators they follow.

Instead, DLive generates crypto credits to reward live-streamers based on the consumption of their content.

It is breaking the traditional revenue model of streaming platforms, like Twitch, which generates profit from taking a 50% split from streamers.

Secondly, DLive is the world's first streaming platform to be built on blockchain technology, which increases the transparency of its transactions.

The blockchain was created by Lino Network, a sister company which was founded in 2017 by Wilson Wei, a fellow University of California, Berkeley alumni and friend of Wyan.

"I think the lack of transparency and the huge cut that platforms take from content creators, are the two biggest problems the online streaming industry has. And blockchain is the perfect technology to solve both problems," Wei said.

By leveraging the transparent nature of blockchain technology, all the creators' income is open in DLive in the form of its own cryptocurrency-Lino Points. The company gives 90.1% of all subscription fees and gifts directly to creators in the form of Lino Points and uses the remaining 9.9% as rewards to the most popular streamers. The Lino Points can then be converted to real cash through third-party platforms such as PayPal.

"I'm certainly not an expert in blockchain technology, but I do think DLive has the opportunity through the transparency they provide to change the system," said Kat Peterson, a co-founder of influence-media company ReelSix and one of PewDiePie's business managers. "It made perfect sense to put the DLive opportunity in front of Felix because of DLive's mission of empowering creators and rewarding their communities, which directly aligns with Felix's goals."

Jeremy Jackson, a market analyst at game and esports research company Newzoo, said the potential impact blockchain technology has on the streaming industry could be disruptive.

"Competition in any sector is generally a positive thing. Blockchain technology and the benefits it can bring could potentially get DLive to challenge Twitch," Jackson said.

Although DLive does not take a cut from streamers' income, there will be processing fees from third-party platforms when users convert between Lino Points and cash. For example, PayPal charges 40 cents per transaction plus 4.4% of the total transaction value to purchase Lino Points.

"Transaction fees might not be a big pain for viewers and they might not have the awareness or care for streamer revenue splits, in which case they probably won't be incentivized enough to move to a new platform," Jackson said.

The company is trying to position itself as the best platform for streamers by maintaining a "no cut" policy and promising higher visibility for smaller streamers, but until DLive has a large enough audience, the benefits of the platform might not outweigh the risk to content creators who must prioritize viewership, Jackson added.

DLive's founders share a similar view. "Twitch's advantage lies in its scale, and if we want to compete with Twitch on the same level and even take them down one day, DLive needs to match its scale," Wayn said.

But the company needs more money to fuel the scale-up as it doesn't have a clear profit model yet.

Most of the funding that has kept DLive expanding to the current scale from scratch is from a $20 million seed round that Lino raised in 2017, which was led by a major Chinese venture investment company ZhenFund. It is currently in the process of raising another round of funding to boost the cash-burning growth.

"We will explore profit models such as advertisement once we have hit the scale we are reaching for," Wayn said.

Beyond funding, Wayn and Chen must overcome a racial bias in the game streaming industry in the U.S., where hardly any of the top streamers are people of color.

"Many people are skeptical when they see a bunch of Chinese trying to get into the game streaming industry which is viewed as mainstream and in some ways 'white' culture here in the U.S.," Wayn said.

"But we say why not? Being Chinese didn't give us any disadvantage once you work past the skepticism outsiders have," Wayn added. "If anything, we fit into the stereotype people have on Chinese: we work really hard."