Crashes hastened the carrier's demise, but they were only part of the problem

TAIPEI It took decades for the Lin family to build TransAsia Airways into a respected carrier. But Vincent Lin needed less than six years to undo all that hard work.

After being named chairman of the Taiwanese airline in 2010 at age 37, Lin scored early successes that boded well for the company's future. But deadly crashes in 2014 and 2015 and an overactive appetite for expansion left the company's reputation and finances in tatters, forcing the board to finally call it quits on Nov. 22.

"We have made this painful decision to dissolve the company as we do not see any way to turn around the business in the future," Lin told reporters hours after the decision.

Keeping the airline afloat would mean hemorrhaging an average of 10 million New Taiwan dollars ($313,258) a day, he said. Lin also cited rising oil prices and an unfavorable exchange rate as factors behind the decision.

TransAsia said in a separate statement the same day that it would be unable to repay a euro-denominated convertible bond worth $75 million that matured on Nov. 29.

COLORFUL PAST Founded in 1951, TransAsia was Taiwan's first private carrier. It also had a colorful past: In 1958, it helped with CIA operations in Indonesia against pro-communist President Sukarno by delivering ammunition and other supplies.

In 1983, the airline was taken over by the Lin family-controlled Goldsun Group and Taiwan Secom.

The board's decision to dissolve the company came less than 24 hours after the carrier denied, via an exchange filing, that it would terminate operations after its online booking service was suddenly halted on Nov. 21.

Also on Nov. 21, TransAsia's stock plummeted more than 7%, after which Taiwanese investigators launched an investigation into whether the carrier's executives or anyone else breached insider-trading or other regulations. 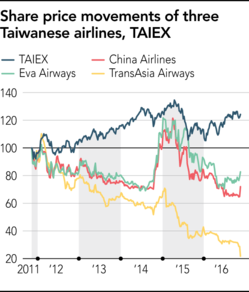 On Nov. 25, prosecutors charged Lin with fraud for promoting ticket sales during a trade event in October. They also accused a member of the Lin family of insider-trading infractions.

Lin is still in the middle of a three-year probation for a hit-and-run accident that injured a motorcyclist in March 2015, one month after TransAsia's second crash.

While the airline's poor safety record contributed to its collapse, market watchers point to other factors as well, including expanding its routes and fleet too quickly, and ferocious competition.

A series of strategic blunders, the inability to find a niche and respond to changes, and a drop in inbound tourism by mainland Chinese also played a role, according to a report by the Sydney-based CAPA Center for Aviation.

TransAsia had a fleet of 16 aircraft serving 27 destinations. Its biggest earners were routes to China, where it served 13 cities, and Japan, six.

"The airline faced a supply-demand imbalance in operating routes to Japan, where there was fierce competition with bigger global brands," said Hwang Tay-lin, an associate professor of aviation and maritime transportation management at Chang Jung Christian University.

"As a small carrier lacking economies of scale, it was very difficult for TransAsia to operate efficiently and compete with bigger rivals with deeper pockets," Hwang said.

The sudden fall in Chinese tourists following the inauguration in May of pro-independence politician Tsai Ing-wen as Taiwanese president battered TransAsia's hopes for a turnaround, according to Hwang. For the first 10 months of 2016, the number of Chinese visitors to Taiwan dropped nearly 12% on the year to 2.52 million. The slump became especially pronounced in the June-October period, with the number tumbling 31% to some 972,000 people, according to Taiwan's tourism bureau.

PROMISING START Lin took TransAsia public in 2011 and helped oversee a doubling of the carrier's revenue between 2009 and 2013, driven mainly by the opening of direct flights between mainland China and Taiwan.

The company had always been profitable, and from 2011 to 2014 it posted better earnings per share than its larger Taiwanese peers China Airlines and Eva Airways.

For a while, it appeared as though Lin had transformed TransAsia from a carrier focused only on domestic and cross-strait services to a full-blown regional airline, using the experience he had gained from his many years abroad.

Lin grew up in the U.S., where he earned a bachelor's degree in business from Georgetown University and a doctorate from the Hastings College of the Law at the University of California.

After taking the helm at TransAsia, he expanded operations aggressively. In less than two years, Lin doubled the number of regional routes, targeting such destinations as Singapore, Hanoi and the Japanese cities of Osaka, Asahikawa, Kushiro, Hakodate and Sapporo.

He kept expanding even after tragedy struck. Less than five months after 48 people were killed in the July 2014 crash on the Taiwanese islet of Penghu, Lin launched a budget carrier called V Air.

Soon, however, the rapid growth began translating to losses. The Singapore and Bangkok routes were terminated within two years. Later, TransAsia stopped using its two wide-body A330 Airbus jets, and in June this year the airline ended flights to Macau, Okinawa and the Chinese city of Guiyang. On Oct. 1, V Air ceased to exist.

Even amid all the scaling back, however, Lin placed orders for four A330 Airbus jets, which were to be delivered in 2018. TransAsia's NT$1.2 billion down payment to the French aircraft maker became yet another loss.

Critics say the expansion efforts came at the expense of safety, pointing to the crash in February 2015, into a river in the Taipei suburbs that killed 43.

Adding to the carrier's difficulties was the outflow of talented personnel that occurred after the crashes. Rivals China Airlines and Eva Airways, as well as mainland-based carriers, poached some of TransAsia's best employees, according to Yeh Wen-chien, an associate professor in the aviation department at Kainan University.

"As the skies become more open in the Asian aviation market, it will be a game of the survival of the fittest," Yeh said.

"More and more carriers will be pushed out of business if they fail to formulate a clear strategy or are unable to compete in scale," Yeh said. "At this point, airlines should be very clear whether they want to target high-end customers or operate as a budget carrier. There is almost no room for midrange players."