Taiwan's Wistron teams up with China's Nio on electric cars

"We are supplying the electric control system for Nio's newly unveiled car and we also have a joint venture with them to invest in auto-related technologies together," Wistron Chairman Simon Lin told reporters in the southern Taiwanese city of Tainan. Wistron says smartphones to be waterproof, have wireless charging this year

Nio, previously known as NextEV, is a renowned rival to Tesla and Chinese manufacturer BYD.

The startup has just unveiled an all-electric dual motor sport utility vehicle dubbed the ES8, which is priced at 448,000 yuan ($67,780) -- half of what Tesla is asking for its Model X in China. The new model went into mass production in mid-December. 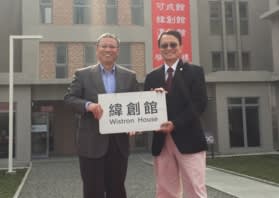 Simon Lin, chairman of Wistron, left, attended a ceremony on Dec.25 to mark a donation made by the company to the National Chiao Tung University. (Photo by Cheng Ting-fang)

Founded in 2014, Nio has recently raised more than $1 billion in a new round of investment led by high-profile companies including Tencent Holdings -- boosting its valuation to some $5 billion, according to China Business Network.

It also attracted other big name investors, including Sequoia Capital, Temasek Holdings and Baidu, in previous rounds of fundraising.

When it comes to electric vehicles, China has a clear policy to provide incentives and deliver thorough execution, according to Lin, adding that the world's largest electric car market could grow very quickly.

Lin said that he had already reserved one ES8 for himself and Nio's plan to build 1,100 power-swap stations in China by 2020 looks promising.

The Chinese government has pledged that some 12% of new cars by 2020 should be electric. In 2016, fewer than 2%, or just over 500,000 out of 28 million new cars in China used clean energy, according to the China Association of Automobile Manufacturers.

Lin's comments came as demand for devices such as PCs and smartphones, major sources of income for Wistron, are either declining or slowing down.

When it comes to iPhone assembly orders, Wistron is a smaller operation than Taiwanese giants Hon Hai Precision Industry, known as Foxconn Technology Group, and Pegatron.

The company started supplying Apple in 2015. In 2017, it has mainly assembled the iPhone 8 Plus and will reportedly make the upcoming iPhone SE2 in 2018 in India.

Lin declined to comment on Apple orders, but did say India was definitely a key market that people who are seeking greater business opportunities should look into.

Lin also said his company is not afraid of emerging competitors in China such as Luxshare-ICT, known as Luxshare Precision Industry.

"We are also a newcomer in making smartphones for others and we are still at the stage of snatching orders from our peers to gain more business, despite the overall market not growing that much."