Taiwan's ancient capital gets a makeover TAINAN, Taiwan Taiwan's ancient capital has always held a certain mystique, drawing tourists from far and wide. Now Tainan finds itself bucking the trend of dwindling visitor numbers on the island, helped in no small part by some of the city's older buildings finding a new lease on life.

One by one, private houses and other buildings from a bygone era are being transformed into chic boutique hotels, cafes and art galleries. Tainan's old houses and buildings are being transformed into hotels, cafes and art galleries, drawing domestic and overseas visitors alike.

The renovation work has sparked a boom that is adding a new dimension to the local tourist industry and bringing more visitors to the city, despite fewer travelers coming to Taiwan from mainland China.

Back in May, Beijing moved to restrict visits to the island after the inauguration of a new, pro-independence government led by President Tsai Ing-wen. But, in many ways, Tainan has been insulated from the heavy blow tourism has taken as a result, emerging as a new model for the struggling industry.

USE WHAT YOU'VE GOT Chen Jia-lin was driven by a desire to make her native city more attractive when she opened the 821 Space Inn in February 2013. The 34-year-old owner earned a master's degree in art in the U.S. and set up the business on her own at the age of 30 after working for a construction company. 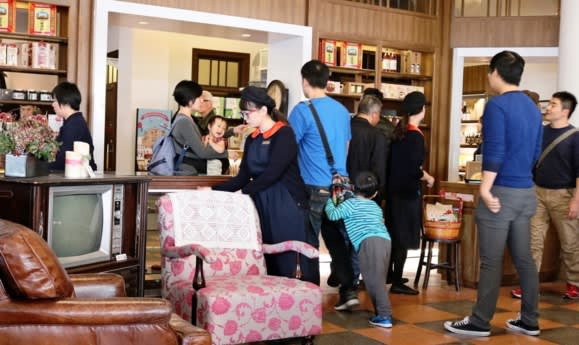 Hayashi Department Store, which dates from the Japanese colonial era, has been turned into a modern shopping facility.

Chen refurbished a former U.S. military barracks believed to have been built around 40 or 50 years ago, turning it into a stylish inn. The interiors of the seven rooms are all decorated differently according to seven specific design themes. To keep things fresh, the rooms get a makeover every year.

Impressed by the designs, some guests have become regular customers and have stayed in all seven rooms.

Chen is not alone in using her aesthetic sense to breathe new life into the city's crumbling old buildings.

A growing number of small, charming inns like 821 Space have emerged in recent years and become a driving force of tourism in Tainan. Many are remodeled private houses featuring simple but comfortable facilities and offer services with a personal touch. Some are fully booked for half the year. The wave of renovation is spreading beyond hotels. Across the city, there are alleys lined with shops, cafes and galleries in the shells of old buildings.

A stroll through old Tainan is an experience of surprises and discoveries, said a student from the northern city of Taoyuan.

Many of the young people leading the revitalization of Tainan have migrated from the capital and other bustling cities in northern Taiwan, attracted by the warm climate and laid-back lifestyle. Chen's four employees at 821 Space are all from other parts of the island.

Some buildings from the era of Japanese colonial rule have also found a new life as commercial facilities. Hayashi Department Store, originally opened in 1932, was renovated in 2014.

Under a project led by the municipal government, the exterior was restored to its original glory, while the inside of the building has the air of early 20th-century Japan. The department store houses boutiques selling products by Taiwanese designers and stalls with local specialties.

Many tourists in Taiwan limit their trips to the capital and the surrounding area, but Tainan Mayor William Lai, also known as Lai Ching-te, claims you cannot really know Taiwan unless you visit the city.

The historical and cultural heritage of the south is attracting more and more attention from abroad. Japanese travel agency JTB plans to open an office in Kaohsiung, the largest city in southern Taiwan, just south of Tainan, this spring.