TAIPEI -- A soon-to-be 80-year-old will set off from Taipei on a bicycle tour of Taiwan on May 1.  The plan is to complete a 1,000km road trip of the island in just 12 days. The man is King Liu, founder and chairman of Giant Manufacturing, the world's largest bicycle maker. 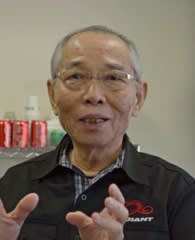 It is the second time for Liu, the nation's cycling godfather, to take up the challenge of traveling the island by bicycle. He first did it in 2007.  Serving the industry, he aims to demonstrate to people in Taiwan and the world, how fun it is to ride. For training, he cycles about 40km between his home in Taichung, and his office.

Taipei International Cycle Show, the world's largest bicycle trade show, is held in March every year in Taipei. The event was held over four days this year and attracted a total of roughly 27,000 people, including over 7,500 buyers, a record high.  Luxury models, which sell for several thousand dollars, filled the venue for the high energy event.

So strong is Taiwan's bicycle industry now it may be hard to imagine the sector was on the verge of collapse in the early 2000s.  How did they recover?  The island's bicycle and parts manufacturers got together to implement a bold program of sharing expertise and technology, aimed at boosting the overall quality of their products while abandoning low-end models. 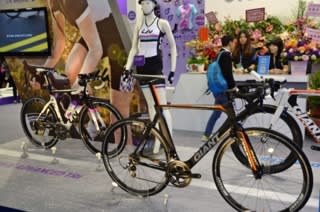 The Taipei International Cycle Show, the largest such industry fair in the world, attracts buyers from around the globe.

Taiwan's bicycle makers once built their own brand products as well as those for many overseas brands.  However, growing demand for low-price bikes with retail prices under 100 dollars caused a marked shift of such contract production for overseas brands to China. Many Taiwanese bicycle makers and suppliers also moved production to China. As a result, Taiwan's bicycle exports plummeted to about 3.9 million units in 2003 -- down from about 10 million units in 1991.

The specter of the industry's imminent hollowing-out prompted executives at Giant to come up with a crisis plan. They called on arch rival Merida along with parts makers to create a consortium of 11 companies called "A-Team." Together, they studied Toyota's manufacturing system intensively, incorporated key points and doubled efforts to improve product quality and production efficiency.  Giant actively provided its manufacturing know-how with member companies -- who benefited largely from this partnership. King Liu said Giant made a "huge sacrifice."  But such efforts helped uplift the overall level of the bicycle industry.

"We decided to leave the low-end bicycles to mainland (Chinese) makers and instead focus our energies on products sold for more than $200," a senior A-Team official said. This strategy of selection and concentration increased per-unit prices and drove up export value sharply. Export per bicycle for 2013 totaled $451, roughly triple the figure for 2003.

The number of Taiwanese companies in A-Team has now increased to 20. The team continues to make efforts to improve production efficiency and technology by taking turns to share manufacturing sites and processes to other members every month.