TAICHUNG, Taiwan Few outsiders could tell that Largan Precision's bland-looking, white-tiled headquarters tucked away in an inconspicuous, gritty industrial park in a suburb of the central Taiwanese city of Taichung houses one of Asia's most lucrative tech companies. 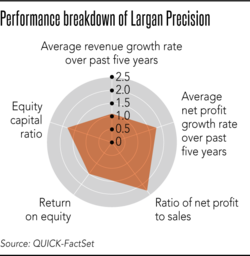 The Taiwanese manufacturing giant is the world's largest smartphone camera lens maker, supplying 80% of all iPhone lenses. A single Largan share now is worth close to $100, the highest among all companies listed on the Taiwan Stock Exchange.

For all of 2015, Largan booked a net profit of 24.1 billion New Taiwan dollars ($750 million), or NT$180.09 a share, the highest earnings-per-share among all listed Taiwanese companies, on revenue of NT$55.8 billion. The company's net profit last year was more than six times that of its biggest Chinese rival, Sunny Optical Technology (Group), which earned 761 million yuan ($115 million).

A key factor in Largan's success is its secrecy.

"Though we have been a supplier for Largan for more than a decade, none of our staff are allowed to visit its production lines," said a senior executive from a Taiwanese company. "We can only deliver our shipments to Largan's parking lot and then leave."

Major clients such as Apple, which contributed 28% of its revenue in 2015, are also denied access.

"There are very few suppliers that Apple is not allowed to audit, and Largan is one of them," said Jeff Pu, an analyst at Yuanta Investment Consulting.

Founded in 1987 with only NT$10 million as a small lens factory by Scott Lin, Largan has grown into a mammoth enterprise worth more than NT$400 billion. It is now overseen by Lin's second son, Adam, who became CEO in 2010. Adam Lin was a pediatrician before he returned to the family business in 2006.

When it comes to business, he can be aggressive.

In 2013, he sued Samsung Electronics and others for infringing on Largan patents. In 2014, he invested a record NT$20.5 billion to build the world's biggest lens factory near its Taichung headquarters. Earlier this year, Largan announced another NT$1.93 billion land deal.

So far Adam Lin has shown great business acumen -- Largan's revenue has expanded more than fourfold and its net profit nearly sixfold since 2010. Largan shares have advanced more than 30% this year.

Even though Largan suffered its first year-on-year decline in revenue in three years in the last quarter of 2015, hit by weak sales of iPhone 6s and iPhone 6s Plus smartphones, it is looking forward to the upcoming iPhone's new dual-lens camera with more powerful zooming functions.

It is not just Apple that will adopt the dual lens, which major smartphone makers worldwide consider a must-have element.

"There will be more and more companies opting for the dual-camera feature in the second half of this year," Adam Lin said during the annual shareholders' meeting June 8.