TAIPEI -- Taiwanese companies are controlling a major share of the global smartphone parts market. The success comes from their continuous efforts to hone skills in order to meet the needs of a demanding customer set.

Catcher Technology won a big order for metal chassis from Apple for use in its new iPhone, scheduled to be unveiled on Tuesday. The Taiwanese company plans to increase its production capacity by 30% from the end of 2013 by the end of September. 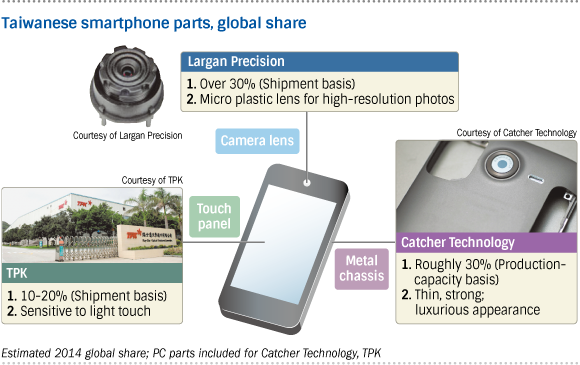 Previously, Taiwan's Hon Hai Precision Industry, which assembles iPhones, held a near monopoly on the manufacture of iPhone body casing.

Catcher is the world's largest metal chassis maker for PCs and other electronic devices and controls roughly 30% of the global market, on a production capacity basis.

The company is renowned for its chassis technology, which finely carves aluminum alloy and magnesium alloy. It takes as much as 30 minutes to make just one body. But Catcher is willing to spend the time to ensure a perfect look, an attitude which matches Apple's hopes of elevating the class of its new iPhone.

Catcher was founded in Tainan in 1984. CEO Allen Horng, a former doctor, flatly states that its mold and surface treatment technology were developed in-house. The company entered the smartphone chassis market around 2013, supplying products to compatriot HTC and Japan's Sony.

Samsung Electronics of South Korea asked Catcher to provide the chassis for its high-performance Galaxy S5 introduced this spring. But Catcher turned them down, saying it was too busy.

That forced Samsung into using plastic chassis and caused it to fall behind competitors in a smartphone market now dominated by metal chassis. Some say that the failure in procuring metal chassis was partially responsible for the downturn in Samsung's sales and profit for the first time in nine years for the April-June quarter.

Largan Precision controls more than 30% of the global market for optical lenses used in phone cameras, on a shipment basis. The company produces roughly 0.1mm-thick ultra-small lenses, using the more than 400 patents it holds.

Scott Lin, founder of Largan and father of CEO Adam Lin, lost out to Japanese rivals in the early 2000s, when digital cameras started to become popular. He vowed to rally back and take the offensive with smartphones and quickly obtained a patent on a low-cost plastic lens, which served as the driving force for the company's current market control.

Largan now devotes itself to improving accuracy and production efficiency of its mold injection technology and the production device it developed. Currently, most smartphone cameras have a resolution of 8 million pixels. But CEO Adam Lin says there is growing demand for those with 10 million pixels or more.