TAIPEI -- Taiwan's tech sector took its biggest hit of the year in October, with 19 companies monitored by Nikkei logging a combined revenue drop of 3.5% on the year. Key Apple and Huawei suppliers proved themselves surprisingly resilient, however, thanks to strong smartphone launches and strategic stockpiling by their two biggest clients.

The 19 Taiwanese tech suppliers included in the Nikkei Asian Review's monthly tech tacker serve as a bellwether of the global tech industry, as their clients include everyone from hardware giants Apple, Huawei, HP, Dell and Cisco, to internet companies such as Amazon and Google.

Key findings for October and the third quarter are presented below in an easy-to-digest, graphics-led format.

Total revenue for the 19 companies fell to $1.27 trillion New Taiwan dollars ($41.6 billion) in October, down 3.48% on the year. That is a sharp reversal from the more than 4% year-on-year growth in September. One factor in the fall is the release of the iPhone XR in October 2018, resulting in a higher base for comparison.

Despite the uncertainties of the protracted U.S.-China trade tension and Washington's crackdown on China's Huawei Technologies, key suppliers that serve both Apple and Huawei turned in strong performances in the three months through September. The third quarter is traditionally the peak season for tech supply chains as they prepare for Apple and Huawei to launch their flagship smartphones in the second half of the year. 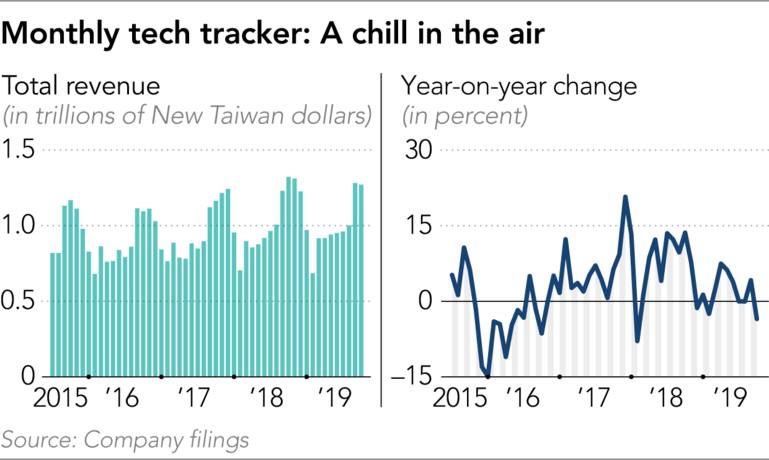 Better-than-expected demand for the iPhone 11 range was a major factor in TSMC, Foxconn and Largan recording year-on-year revenue growth and substantial increases in operating profit in the quarter. They also benefited from an increase in orders from Huawei as the Chinese company seeks non-U.S. alternatives for its supply chain and prepares to stockpile inventories. The sales momentum extended to October, when TSMC, Foxconn and Largan reported revenue growth of 4.42%, 1.04%, and 27.2%, respectively, on the year.

Foxconn founder and former chairman Terry Gou has said that with the trade war continuing, he foresees a Group of Two-- the U.S. and China -- supplanting the G20 and leading to a "one world, two systems" situation that will also apply to tech supply chains. While this presents a challenge, Gou said, it is also a business opportunity for suppliers if they can find a way to supply both U.S. and Chinese customers.

MediaTek, the world's No. 2 mobile chip developer after Qualcomm, is already benefiting from the trade tensions. The company has seen sale pick up as China continues its de-Americanization campaign -- replacing U.S. suppliers with non-U.S. alternatives -- in the wake of Washington's clampdown on Huawei. China's push to roll out 5G wireless networks as early as this month is another growth catalyst for the Taiwanese chip designer, which supplies most Chinese smartphone makers such as Huawei, Oppo, Vivo, Xiaomi, and Lenovo Group. MediaTek also counts Samsung Electronics, Amazon and Cisco as clients.

Its monthly revenue growth has outperformed the overall Taiwanese tech tracker in most months of 2019. In October, MediaTek saw its sales rise 5.6% from a year ago.

"We have a much more positive outlook for 5G smartphones for next year compared with three months ago," said Rick Tsai, CEO of MediaTek at the end of October. The company also moved up its schedule for its first 5G integrated chipset to the end of 2019 and expects to have new smartphone launches equipped with such chips as soon as the first quarter of next year, a similar timeframe as that of its U.S. rival Qualcomm.

In 2016 through 2017, MediaTek went through a painful profit slump after it underestimated China's push to promote smartphones capable of supporting cutting-edge Cat7 data transfer specifications, missing a big market opportunity.

Since MediaTek hired Rick Tsai, an industry veteran and former CEO of TSMC, in summer 2017, he pledged to improve the chip designer's profitability and help it regain growth.

Under Tsai's leadership, MediaTek is expanding its design service business, focusing more on products that offered higher profit margins, and accelerating its development of 5G chips. The company's gross profit margin for the July-September period picked up to 42.1%, its highest in four years.