Foxconn loses some iPhone 8 Plus orders to smaller rival

TAIPEI -- Apple suppliers continued to lead major Taiwanese technology companies' sales in January, while combined revenue of 19 companies monitored by the Nikkei Asian Review rose more than double-digit from a year earlier, despite a significant moderation from December.

For January, overall sales of the 19 tech companies increased 13.28% from the same month a year ago to a 953.4 billion New Taiwan dollars ($32.5 billion), marking the 14th consecutive month of growth. However, January sales declined 23.1% from NT$1.24 trillion in December, which was the highest monthly revenue figure since January 2013, when listed companies in Taiwan began to adopt international financial reporting standards.

Eight of the nine Apple suppliers on the watchlist reported growth in January sales from a year earlier. The nine generated a total NT$790.84 billion in revenue, up more than 13% from a year earlier, but down 26% from its peak of NT$1.06 trillion in December.

Analysts attributed the year-over-year increase in Apple suppliers' revenue mainly to higher prices for the iPhone X and the iPhone 8 range than the iPhone 7 series, even though demand for the premium iPhone X handset is weaker than expected.

"The higher average sale price helped Apple suppliers' revenue look better than the previous year, but we are not sure whether the profit margin is also higher," said Jeff Pu, an analyst at Yuanta Investment Consulting.

"Meanwhile, the interesting point is that we are seeing relatively good demand for older models, such as the iPhone 7 range, this year," said Pu. "In previous years, new models will significantly outsell older models, but many consumers now are apparently looking for better deals this year rather than just buying the latest models." 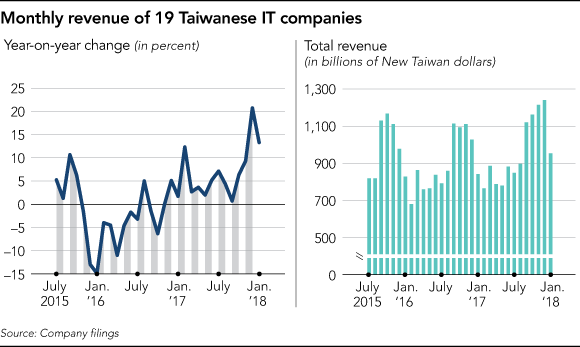 Apple has slashed its production target for the iPhone X in half to around 20 million units for the current January-March quarter, according to a report last month in the Nikkei Asian Review report. The company had originally envisaged to produce more than 40 million units during the first quarter when it released the iPhone X in last November.

The shift in demand for different iPhone models has significant implications for each Apple supplier.

Hon Hai Precision Industry, better known as Foxconn Technology Group and a major iPhone assembler, saw its revenue increase 16% to NT$400.6 billion in January from a year earlier, mainly due to the higher price tag on the iPhone X. But Foxconn's January sales declined more than 40% from December. Foxconn serves as the sole supplier of iPhone X and also produces a majority of the iPhone 8 Plus model.

Pegatron's revenues were boosted in January because of relatively robust demand for the less expensive iPhone 7 that it mainly assembled, while Foxconn has lost some iPhone 8 Plus orders to Wistron since last month. Wistron is not included in the Nikkei Asian Review's watchlist.

Pegatron makes the smaller-screen and less costly iPhone 8 and iPhone 7 models, while Wistron manufactures the iPhone 8 Plus and the more affordable iPhone SE.

Looking ahead, Pegatron and Wistron this year could gain more orders from Apple as part of the U.S. company's efforts at continuing to diversify its suppliers, said Kylie Huang, an analyst at Daiwa Capital Market.

Apple's metal casing and metal frame maker Catcher Technology reported a more than 68% surge in sales in January from a year earlier, thanks to strong demand for the iPhone 7 and taking market share from Foxconn's casing unit that makes metal frames and assembles them with glass backs for the iPhone 8 Plus.

Catcher also makes metal frames and assembles them with the glass housings for the iPhone 8 model.

Analysts said the growth catalyst for both companies came not just from making Apple products but from stronger demand for commercial notebooks made by HP and Dell this year compared with a year ago.

Taiwan Semiconductor Manufacturing Co., the world's biggest contract chipmaker and sole supplier for iPhone core processor chips, saw its January revenue increase more than 4% from a year earlier to NT$79.74 billion. Advanced Semiconductor Engineering, a chip packing and testing partner for Apple, reported a sales increase of nearly 4% in January. Revenues for TSMC and ASE slipped more than 10% from December.

"We have seen that [Chinese handset makers] were more conservative in placing orders in the last quarter and in the current quarter, as the country's domestic mobile market slows down substantially," Rick Tsai, chief executive of MediaTek, said in an earnings briefing at the end of January.

Other underperformers in January included major Taiwanese display makers Innolux, a Foxconn affiliate, and AU Optronics, with revenues falling 4.24% and 7.61%, respectively, from a year ago. Both companies were hit by falling prices for liquid crystal displays panels for televisions, monitors and mobile handsets.