Each month the Nikkei Asian Review monitors the revenue of 19 Taiwanese tech suppliers, whose clients range from hardware giants Apple, Huawei, HP, Dell and Cisco, to internet companies such as Amazon and Google, as well as electric vehicle maker Tesla, and telecom equipment builders Nokia and Ericsson. Key findings for the month are presented below in an easy-to-digest, graphics-led format.

Total September revenue for the 19 companies tracked by Nikkei rose 4.19% on the year to $1.27 trillion New Taiwan dollars ($41.66 billion), the highest level this year. That represents a recovery from a minor year-over-year contract in accumulated revenue of 0.02% in August.

September is usually a robust month for the sector as smartphone makers launch new products ahead of the year-end holiday season.

Taiwan Semiconductor Manufacturing Co., the world's biggest contract chipmaker and a key supplier to Apple and Huawei, saw its monthly sales rise from a year ago. The chip titan, which is seen as an indicator of future electronics demand, has seen a healthy rebound since June, offsetting headwinds brought by trade conflict uncertainties since the end of 2018. Nanya's monthly revenue fell more than 37% compared to a year ago, but the severe price plunge in the memory chip market moderated slightly in September, and the company expects prices to rebound somewhat at the beginning of next year.

"We expect next year will be better than this year as most of the other big memory chipmakers out there are more careful now not to expand too aggressively and continue to digest inventories," Nanya Tech President Lee Pei-ing told reporters last week. "It's good news that we start to see some signs of recovery."

However, Lee is still conservative about the capital investment for next year. For 2019, Nanya Tech has lowered its capex to NT$7 billion, down from more than NT$20 billion in 2018 in a reflection of the severity of the market downtrend.

Among the 19 Taiwan tech companies that Nikkei tracks monthly, nine of them are major suppliers to Apple, ranging from makers of chips and metal frames to providers of final assembling services. As the Cupertino-based tech giant begins to ship its new flagship iPhones, Apple Watch, iPad and other new devices following its press launch earlier this month, many of its Taiwan tech suppliers enjoyed a revenue boost. 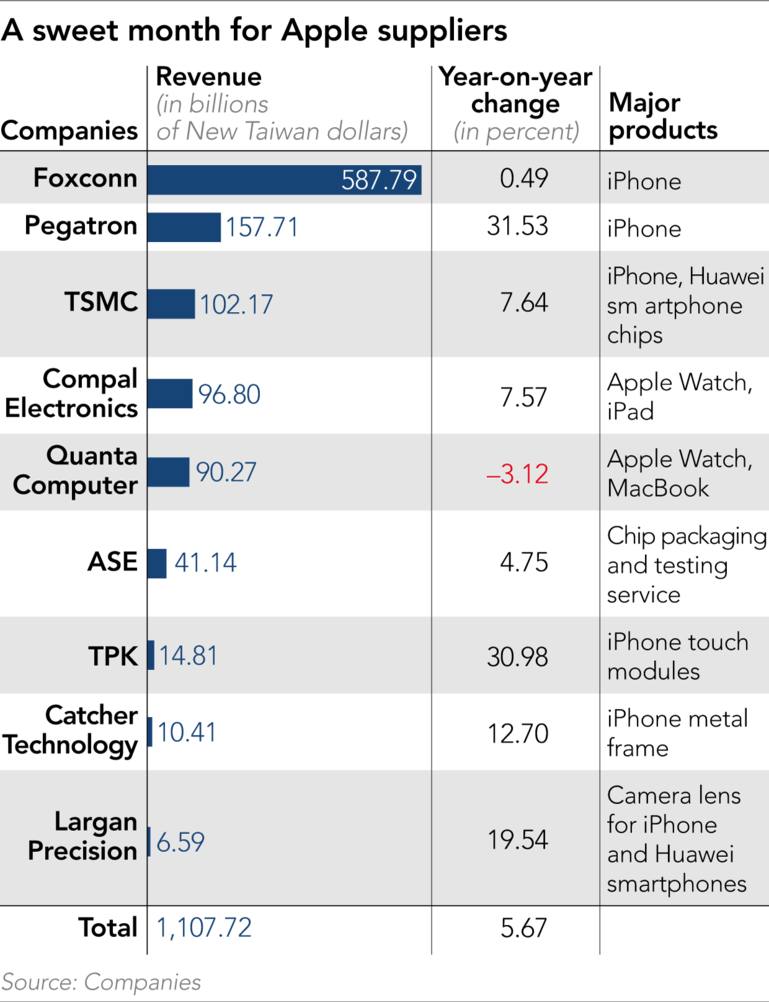 The combined revenue of the nine Apple suppliers grew 5.67% on the year to NT$1.1 trillion last month, outperforming the total growth for the 19 Taiwanese tech companies, which came in at 4.19%.

Compared with a muted August, Key iPhone assembler Foxconn, which formally trades as Hon Hai Precision Industry, saw its sales in September surge 47% from a month ago, while its smaller rival Pegatron saw September revenue jump more than 60% on the month. Compal Electronics, which assembles Apple Watch and iPads, also benefited from the new product launches, with revenue climbing nearly 30% from August.

Apple's decision to lower the starting price of its latest iPhone series helped spur demand, leading the Cupertino-based tech company to increase production for the new devices soon after they hit shelves, as the Nikkei Asian Review reported in early October. The scale of the production increase is around 7 million to 8 million units, or about 10% more than Apple's previous planned production for this year's new iPhones. Largan Precision, the world's largest smartphone camera lens maker, is a major supplier to both Apple and Huawei. The Taiwanese company's revenue performance is closely  linked with consumers demand and fluctuates with the yearly cycle of the smartphone industry.

Largan's revenue contracted on the year in the beginning of this year when Apple, its biggest client, saw its iPhone shipments decline, but the company quickly bounced back to growth in the following months when Huawei introduced its flagship P30 smartphones.

The Taichung-based company has enjoyed double-digit percentage growth in revenue for two consecutive months, supported not only by Apple's new iPhone 11 series but also by Huawei's new flagship Mate 30 series. Although Huawei, Largan's second-largest client, has not yet begun the sales of the Mate 30 series overseas -- due to Washington banning new Huawei phones from coming pre-installed with Google apps -- Huawei said it sold 1 million handsets in just three hours when the product hit the shelves in its home market of China.

Largan's September revenue of NT$6.59 billion marked the company's highest monthly performance since it was listed on the stock market in 2002. In the first nine months of this year, Largan's combined revenue already climbed 13% to NT$42.38 billion.

"The demand in October will be similar as in September, and even if November's goes down a bit, it won't be too much of a fall," Largan CEO Adam Lin told investors on Oct. 9, citing the order forecast provided by clients.