TAIPEI -- Taiwan's four big chip companies reported a robust 8% growth in revenue in November, continuing a recovery they began in June and outperforming a broader tech industry that saw revenue shrink on the year.

Each month the Nikkei Asian Review monitors the revenue of 19 Taiwanese tech suppliers, whose clients range from hardware giants Apple, Huawei Technologies, HP, Dell and Cisco, to internet companies such as Amazon and Google, as well as electric vehicle maker Tesla, and telecom equipment builders Nokia and Ericsson. Key findings for the month are presented below in an easy-to-digest, graphics-led format.

Total November revenue for the 19 companies tracked by Nikkei dipped 2.4% on the year to $1.27 trillion New Taiwan dollars ($42.3 billion), unchanged from October. TSMC and United Microelectronics are the world's top and third-largest contract chipmakers, respectively. ASE Technology Holding is the world's biggest chip testing and packaging house, while MediaTek, is a leading mobile chip developer.

Demand for their products -- the essential components for every electronic device -- offers an early indicator of the broader tech market outlook. The recovery since June in Taiwan's chip sector signals rising hopes of a trade truce between Washington and Beijing, as well as investor optimism over global growth. 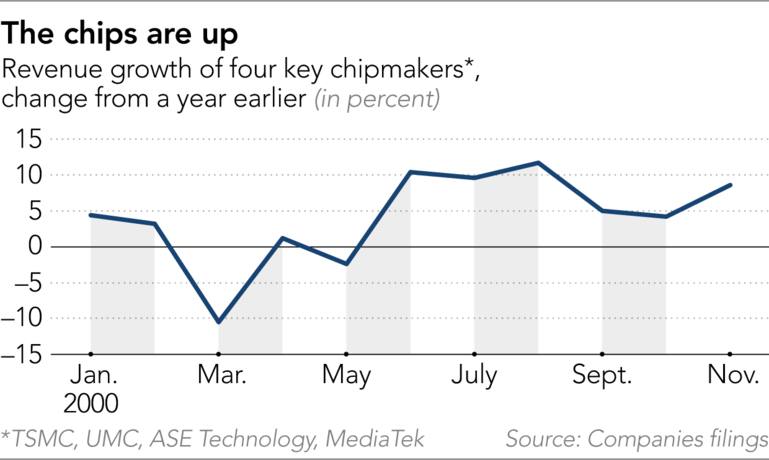 TSMC in particular is seen as an industry bellwether and barometer of global electronics demand thanks to its wide range of customers including Apple, Huawei and Qualcomm. After a sharp slowdown at the end of last year due to rising trade tensions, TSMC said demand began picking up in July. The chip titan has even increased its planned capital spending for this year to up to $15 billion, from around $10 billion to $11 billion in October.

Shares of TSMC have risen around 50% this year, outperforming the Dow Jones Industrial Average and the Nasdaq. In November, the company's market capitalization surpassed that of South Korean rival Samsung Electronics for the first time, becoming become Asia's most valuable company and the world's most valuable chip company. Asustek Computer, the world's No. 6 PC company by shipments, said its operations are slowly getting back on track after it posted positive revenue growth for the fifth straight month in November. However, the company said the prolonged shortage of central processing units and uncertainties from Washington-Beijing trade tensions are putting persistent pressure on the industry as a whole and could extend into 2020.

Intel has been struggling since late 2018 to churn out enough 14-nanometer CPUs to meet demand and is at the same time struggling to roll out its most advanced 10-nm type. Intel issued an apology to clients and partners in November, saying it is working hard to "regain supply-demand balance," but acknowledged that it has "not yet resolved this challenge."

Intel's supply trouble has given smaller rival Advanced Micro Devices a window of opportunity to expand its presence, as many PC companies have adopted AMD's CPU solutions to lessen the impact of the shortage. But it takes time to redesign PC products for a different chip provider and then test market reaction.

HP, the world's No. 2 PC company, said the CPU shortage will limit its revenue this quarter, while Dell, third globally, lowered its sales forecast for 2019 following Intel's apology.