Taiwan's tech industry hunkers down after worst month since 2016

Key iPhone assembler Pegatron warns of a 'hard year' ahead

TAIPEI -- iPhone suppliers are bracing for a tough 2019 after Taiwan's leading electronics manufacturers logged their slowest month of sales in three years.

Pegatron, the second-largest iPhone assembler after Foxconn, on Thursday warned that the April-June quarter would be the company's trough for the year, and that all of 2019 would be difficult because of uncertainties created by U.S.-China trade frictions.

"Besides the trade war, demand for existing products has already peaked and new products are still on the way. ... It is going to be a hard year," Pegatron CEO S.J. Liao said.

"We will cautiously manage costs and do our best to maintain the profits that we worked so hard to earn," Lin said. 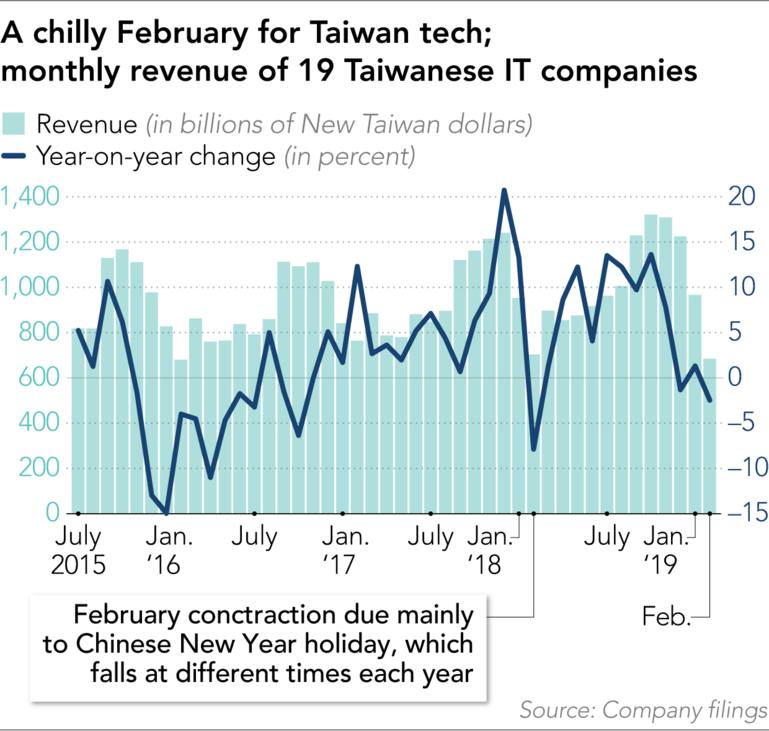 "We don't see much excitement for a smartphone industry this year that is already very saturated, besides the foldable phones that are still developing," said Joey Yen, an analyst at research company IDC, adding that the effect will ripple through to the supply chain. "It will be a tough year for smartphone makers ... and it's even tougher for those brands that are not in the top 5 positions to grab consumers' eyes and stay in the race."

Sales at Catcher Technology, a metal casing and frame maker for iPhones and MacBooks, plunged nearly 40% to NT$3.44 billion, marking the lowest level in five years.

Taiwanese electronics brands Asustek Computer and HTC continued to suffer revenue declines in February. Both the companies witnessed their worst monthly sales performance since Nikkei started to track them in January 2013.

Apple faced a major setback last year when demand for its newest iPhone series dropped sooner than estimated. The Cupertino, California-based company told Foxconn and Pegatron to cancel their plans to increase production for iPhone XR only weeks after the model hit the shelves in October, Nikkei reported.

Apple, the world's most profitable smartphone company, on Jan. 2 trimmed its quarterly revenue guidance for the first time in 16 years. CEO Tim Cook blamed the slowing Chinese economy and the ongoing US-China trade war. Taiwanese tech suppliers, many of which rely on Apple as their biggest client, had little shelter from the smartphone industry headwind.

The export-oriented island is caught in the trade friction between the world's two largest economies. The Taiwanese government recently lowered its 2019 GDP growth forecast by 0.14 percentage point to 2.27%, citing a slowing global economy that hit Taiwan's export and domestic demand.