TAIPEI -- Revenue growth at major Taiwanese technology companies slowed in June, as demand for some Chinese smartphones and iPhones ebbed while the market awaits the arrival of new Apple products later this year.

The combined revenue of 19 companies monitored by the Nikkei Asian Review rose 4.08% on the year to 916.98 billion New Taiwan dollars ($30.01 billion) in June, down from the 12.25% increase recorded in May. The group had mixed performances in June, with 10 companies reporting sales declines while the rest managed to grow.

The best performer for the month was Nanya Technology, Taiwan's leading dynamic random access memory chipmaker, with the price for memory chips staying high thanks to tight market supply.  The company's June revenue surged 104.7% to NT$8.58 billion. However, market watchers said the DRAM price might have peaked and the upside could be limited in the second half of 2018.

For the first half of 2018, key Taiwanese tech companies saw a 5.3% increase in revenue to NT$5.2 trillion. Looking ahead, analysts fear that the fast-maturing smartphone market and the escalating trade war between the U.S. and China could eventually hit demand and hurt their stock performance. 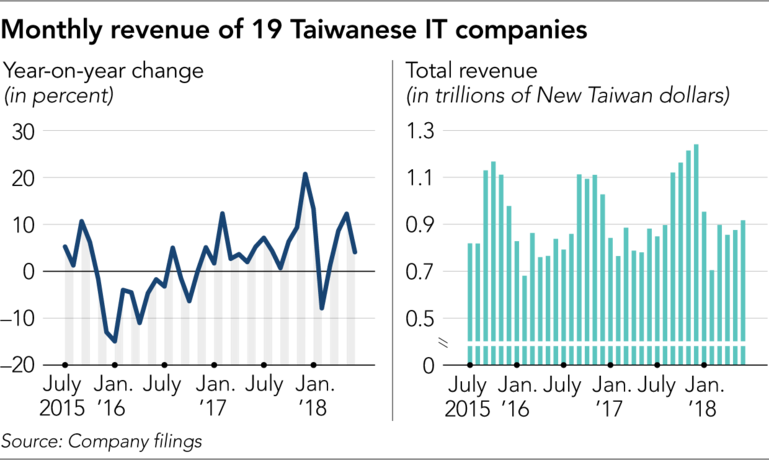 But new orders from the Chinese handset makers have slowed as most are cautious about building up inventories. At the same time, components for the upcoming iPhones are not yet ready to ship or generate revenues.

"The sell-through for new Oppo and Vivo phones is a bit lighter than expected.  All the Chinese gadget makers do not want to place orders too aggressively currently and tend to be more careful about their inventory control," said Jeff Pu, an analyst at Yuanta Investment Consulting. "Meanwhile, most Apple suppliers are still preparing for the new cycle of iPhones that will begin bringing revenue in the September quarter."

Vincent Chen, head of regional research at Yuanta Investment Consulting, said if the current trade conflicts continued to escalate, "the ripple effect could be bigger than expected and hit both consumer electronics demand and global economic conditions."

Taiwan Semiconductor Manufacturing Co., the world's biggest contract chip manufacturer and a key Apple supplier, saw its revenue drop 16.33% to NT$70.43 billion from a year ago due to slowing premium phone demand and volatility in cryptocurrency mining chips. Monthly revenue for MediaTek, the leading mobile chip provider to China, declined 3.81%. But April-June sales for both chip companies were in line with previous guidance. MediaTek is also a key TSMC client.

Key iPhone assembler Pegatron recorded a year-on-year contraction of 5.21% to NT$75.89 billion. This represented its first decline in its monthly performance this year, as well as its lowest monthly sales since the start of the year.

A Pegatron investor official said it was no surprise that the company's sales were soft in June, "when the market is expecting new products in the second half." Its communication products are mostly used in the smartphone assembly business, including for iPhones.

Hon Hai Precision Industry, also known as Foxconn Technology Group, and lens maker Largan Precision were among the stronger performers of the 19 tech companies last month. They are both key suppliers to the iPhone and Chinese smartphones.

Foxconn saw its revenue boosted 23.72% on the year to NT$389.88 billion, marking the highest June sales in the company's history. It attributed the growth in June to its consumer electronics products, mainly iPhones and Android phones.

Largan, which counts Huawei and Oppo as clients, grew 16.82% on the year to NT$4.5 billion. Largan is the key supplier to Huawei's triple-lensed flagship P20 Pro, which has sold well since its release in March.

ASE Industrial Holding, the world's top chip packaging and testing company, saw its revenue jump 34.4% to NT$31 billion from a year ago. The revenue advancement was mainly attributed to the completion of the acquisition of Siliconware Precision Industry by Advanced Semiconductor Engineering, which are now controlled by the holding company. Advanced Semiconductor Engineering's standalone revenue rose 1.73% year on year.

Revenue for consumer electronics brands Asustek Computer and HTC both lingered in the negative territory last month. Sales of Asustek shrank 0.84% on the year while HTC vaporized 67.64% due to its struggling smartphone business. The embattled smartphone maker announced in early July it would cut 1,500 staff mainly in its manufacturing division to slash costs and to restore profitability.