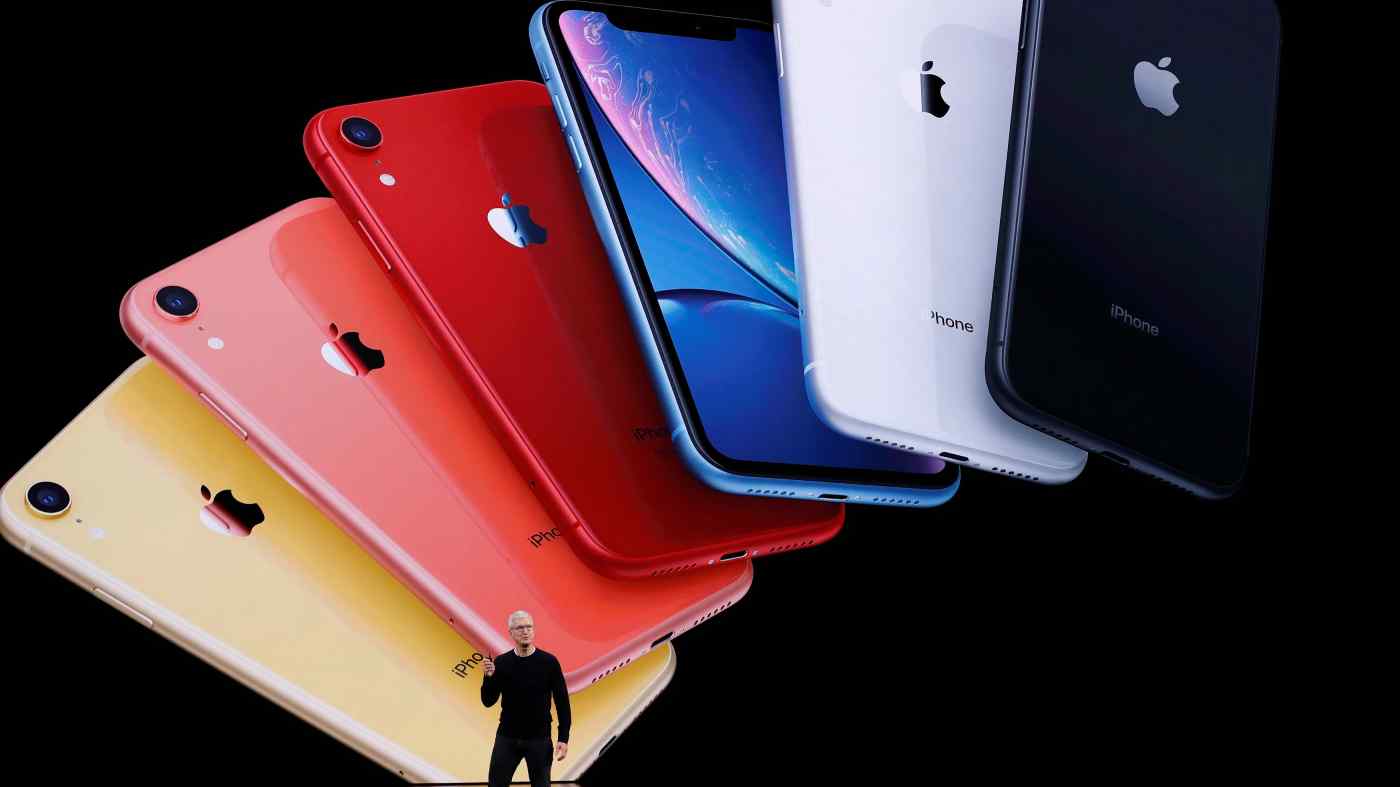 TAIPEI -- Major Taiwanese tech companies saw their combined August revenue drop on the year ahead of the new iPhone launch as a slowing global economy and trade war uncertainties clouded the outlook ahead of the Christmas shopping season.

Each month the Nikkei Asian Review tracks the revenue performance of 19 Taiwanese tech suppliers as a barometer of global electronics demand. The clients of these companies range from hardware titans including Apple, Huawei Technologies, HP and Dell, to internet giants such as Amazon and Google. Telecom gear makers Ericsson and Nokia, electric vehicle maker Tesla also do business with many of these Taiwanese suppliers. Key findings for the month are presented below in an easy-to-digest, graphics-led format.

Total revenue for the 19 tech companies monitored by Nikkei fell 0.02% in August -- the first year-on-year decline in five months -- to 1 trillion New Taiwan dollars ($32 billion). Although only eight out of the 19 companies reported a year-on-year drop in sales, growth at the remaining suppliers was not strong enough to keep the overall momentum positive.

The 19 Taiwanese tech suppliers include four major consumer electronics manufacturers -- Foxconn, Pegatron, Quanta Computer and Compal Electronics. Their clients are a who's who of industry heavyweights, including Apple, Huawei, HP, Dell, Microsoft, Google, Facebook and Amazon. The revenue performance of the four companies reflects that month's shipment momentum, an indicator of global electronics demand. Quanta, the key notebook computer supplier for Apple, witnessed a 7.5% year-on-year drop in August due to the absence of a new MacBook launch compared with the same time last year. Compal reported a 10.04% revenue fall due partly to a hangover  effect as HP and Dell frontloaded notebook orders in the previous months amid concerns that the Trump administration would impose punitive tariffs on laptops. 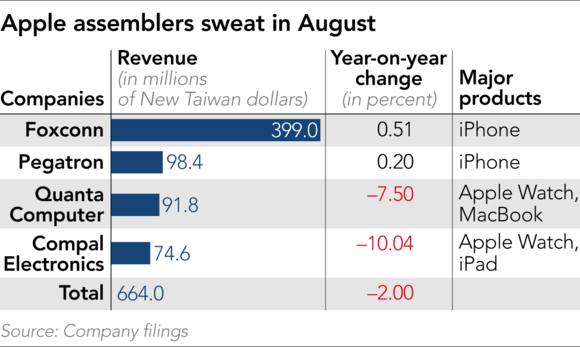 The gloom may be only temporary, however, as Apple unveiled the latest generation of the iPhone, Apple Watch and iPad on Tuesday. Sales are scheduled to begin this month, and the revenue performance of the four major Apple assemblers is expected to pick up around the same time.

Lite-On Technology, a leading components and power parts supplier to the likes of Apple, Dell and Huawei, saw its revenue plunge 12.07% in August, marking the company's eighth consecutive month of year-on-year contraction.

The company has been adjusting its product portfolio by selling business units whose margins are lower than Lite-On's corporate-level performance. The Taiwanese tech supplier sold its smartphone camera module business to a subsidiary of China's Luxshare-ICT for $360 million in June 2018 and unloaded its money-losing mobile mechanics unit to Chinese display maker Zhejiang First Star Panel for 530 million yuan ($74.78 million) in September the same year. 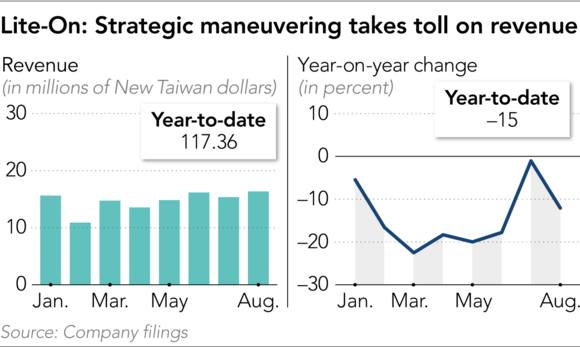 Lite-On recently announced plans to sell its solid state drive business to Toshiba Memory Holding for $165 million, with the deal expected to be completed in April next year. However, the deal does not include an SSD joint venture formed with Beijing-backed Tsinghua Unigroup in 2017, according to Lite-On.

This joint venture was set up to provide memory maker Yangtze Memory Technologies, a Tsinghua subsidiary, with access to storage products, as China lacks its own SSD technology.