The U.S. crackdown on Huawei was just one of the headwinds in a volatile second quarter for Taiwanese tech companies.   © Reuters
CHENG TING-FANG and LAULY LI, Nikkei staff writersAugust 15, 2019 20:06 JST | Taiwan
CopyCopied

Each month the Nikkei Asian Review tracks the sale of 19 Taiwanese tech suppliers, whose clients range from hardware giants Apple, Huawei, HP, Dell and Cisco, to internet companies such as Amazon and Google, along with electric vehicle maker Tesla and telecom equipment builders Nokia and Ericsson. Key findings for the month are presented below in an easy-to-digest, graphics-led format.

Combined revenue of two major Taiwanese display makers declined more than 16%, while Nanya Technology, the world's No. 4 maker of dynamic random access memory, continued to report declines with a 43.9% drop in monthly sale from a year ago.

Meanwhile, four key electronics contract manufacturers including Foxconn, which formally trades as Hon Hai Precision Industry, and Quanta Computer, saw their combined revenue in July slump 1.68% from a year ago. These companies have diverse customer bases that include Apple, Huawei, Google, to HP and Dell. 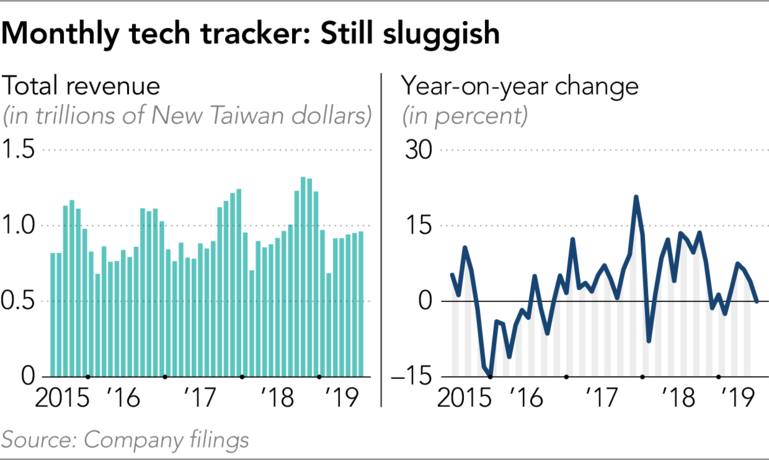 The April-June quarter, meanwhile, was a volatile one. In those three months, the tech industry witnessed the collapse of trade negotiation between Washington and Beijing, the U.S. government's crackdown on China's Huawei Technologies and President Donald Trump's threat to impose 25% tariff on $300 billion worth of Chinese goods, including a wide range of consumer electronics products such as smartphones, notebook computers and game consoles.

Fearing that final round of punitive tariffs, many tech companies accelerated their manufacturing diversification plans and some moved up their shipment schedules from the September quarter to the June quarter. As a result, the four Taiwanese electronics contract manufacturers -- Foxconn, Pegatron, Quanta and Compal Electronics -- together delivered a robust operating performance for the three months through June. 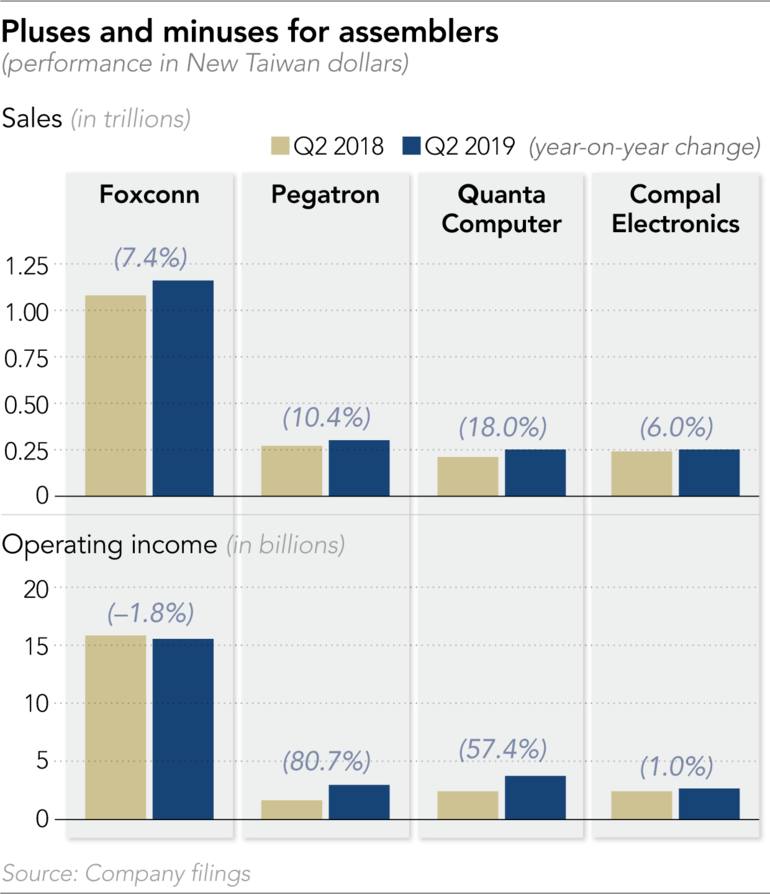 Pegatron, Quanta and Compal saw both their revenue and operating income rise on the year. Foxconn -- the world's largest contract electronics maker and a key supplier to Apple and Huawei -- logged a mild decline in its operating income as manufacturing diversification and costs related to the development of new iPhones in the quarter added to the company's expenses, according to market watchers.

However, the tech supply chain is not very optimistic about the outlook for this quarter, due to fears that the ongoing trade tensions between China and the U.S. could drag on the global economy and affect consumer spending on electronics during the Christmas shopping season. Compal Electronics, a key HP and Dell notebook supplier, has prepared a backup plan to diversify production out of China.

"Our facility in Taiwan has already started shipping products in a small volume to the U.S. in August to help customers avoid tariffs," President and CEO Martin Wong said. "Our Vietnam facilities will be ready to ship by the end of this year." The executive said his team may look for new production sites in Indonesia.

HP and Dell, the world's two major notebook makers, are both seeking to shift up to 30% of their production outside of China, the Nikkei Asian Review first reported. The U.S. government said this week that it will delay imposing an additional tariff of 10% on some key consumer electronics, including smartphones and laptops, until December. The tariffs were previously scheduled to go into effect on Sept. 1.

The company saw year-on-year monthly revenue increases in March, April and May, but has suffered two monthly declines since June.

Wong said many of Compal's customers had stockpiled inventory ahead of the Trump-Xi meeting at the G-20 summit, as most are not expecting a positive outcome to the trade dispute anytime soon.

"However, our customers may not want to book too many inventories as prices of display panels and memory chips continue to drop. ... They don't want to buy expensive components in advance," Wong said. "We do see our revenue in July-September period will be lower than the April-June quarter. But we expect a recovery for the last quarter this year," he added. "After all, there are still too many uncertainties in the second half of this year."