Each month the Nikkei Asian Review tracks the revenue of 19 Taiwanese tech companies as a barometer of global electronics demand. Key findings are presented below in an easy-to-digest, graphics-led format. In April, the 19 companies monitored by Nikkei reported total revenue of 916.59 billion New Taiwan dollars ($29.45 billion), up 7.48% from a year ago. The boost came mostly from orders related to Android-camp smartphone launches by Huawei, Xiaomi, Vivo and Oppo, as well as emerging infrastructure demand to build 5G mobile communication networks.

With the U.S. and China again ratcheting up tariffs, however, there is uncertainty over whether this momentum can hold up in the face of a full-blown trade war. The story was particularly bleak for many of them, as the decision by the California-based company to cut retail prices hurt manufacturers. Total revenue for the nine suppliers in the first three months of 2019 grew 2.63%, but their combined profit plunged 26.23% from the same time a year ago.

Among the nine suppliers, those that rely more heavily on Apple -- such Pegatron, Foxconn and iPhone metal frame supplier Catcher Technology -- were more affected than those with more business from other brands, though iPhone touch module supplier TPK Holding bucked that trend. Their woes reflect the troubles facing their biggest client amid the slowing smartphone industry and trade war uncertainties.

By contrast, Largan Precision, the world’s largest camera lens supplier, logged 26% growth in net profit in the quarter through March. This was thanks largely to its second-biggest client, Huawei, launching its latest flagship handset. The Chinese company overtook Apple as the world’s second-largest smartphone maker in the first quarter of this year, with shipments rising 50% on the year. Apple's shipments, on the other hand, dropped 20%, according to Counterpoint Research. 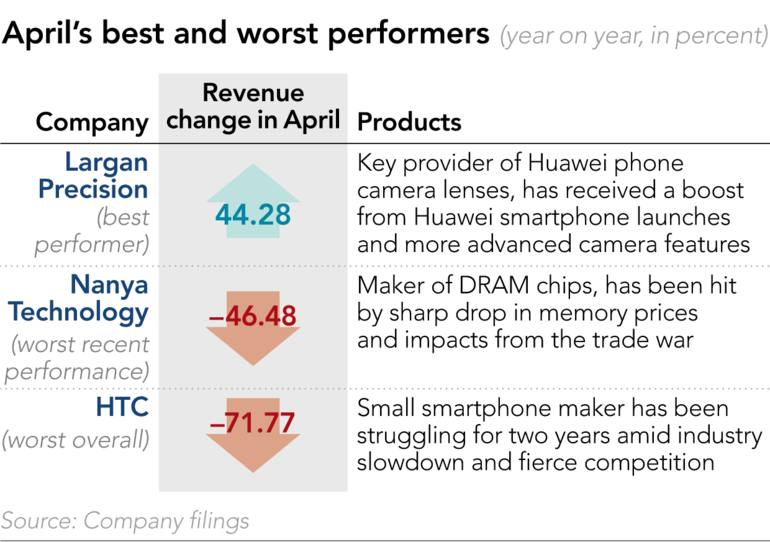 Nanya Technology is the world's No. 4 maker of dynamic random access memory, behind Samsung, SK Hynix, and Micron. In April, the company's sales plunged more than 46%. Nanya's financial woes underscore the problems facing the memory chip industry as whole, as the big players are still digesting inventories following a sudden cooling in demand for electronics products ranging from smartphone to servers.

HTC, meanwhile, has been struggling for years as competition in the smartphone market