TAIPEI -- A majority of Apple's Taiwanese suppliers suffered a monthly fall in revenue in November, as hopes for a sales uptick of the new iPhones ahead of the holiday season were dashed.

The figures suggest that iPhone sales have peaked in October, earlier than last year when sales hit a high in December.

November revenues recorded by 19 Taiwanese tech companies saw a 1% decline on the month to $1.3 trillion New Taiwan dollars ($42 billion), drawing to a halt an eight-month rise. The 19 companies are suppliers for smartphones, personal computers and servers.

Among the Apple suppliers, sales at key iPhone camera lens supplier Largan Precision plunged 23% on the month in November, while iPhone metal frame and casing maker Catcher Technology lost 25% in revenue from the previous month.

However, Foxconn attributed the growth to its communication products, which refers to telecom, networking-related devices, rather than consumer electronics such as iPhones.

"The peak for this year's iPhones has already passed, especially as the iPhone XR supply chain encountered a major scale back in orders in mid-November by around 8 million to 10 million units," said Jeff Pu, a Hong-Kong based analyst at GF Securities.

"Many electronic component suppliers for the XR model is facing serious inventory issue now. We expect to see a clear and major slowdown in December," Pu added. 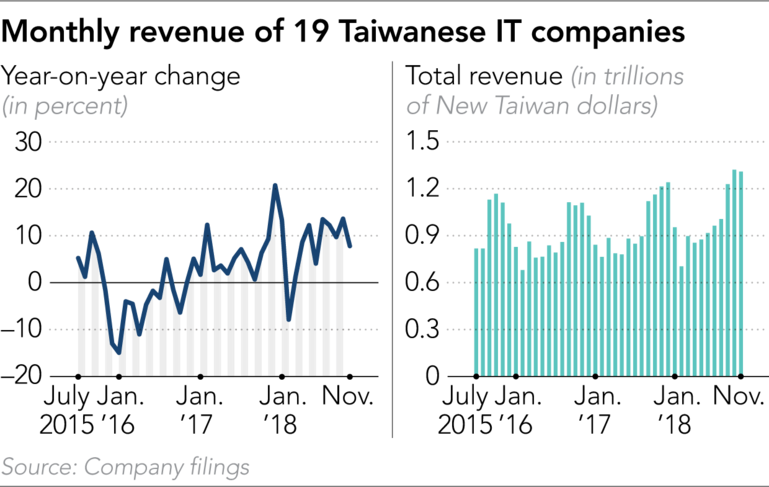 The analyst said he expects the final numbers for shipments of new iPhone models this year to fall to 75 million from 79 million in 2017, largely due to lackluster demand for the iPhone XR.

The detention of Huawei CFO Meng Wanzhou in Canada at the behest of the U.S. is seen to further weigh on iPhone sales in China. Pu said that Chinese customers could turn to Huawei for high-end phones as a show of patriotism.

But it isn't just the iPhone supply chain that is feeling the chill as the entire tech industry in Taiwan marked slower growth in November. Combined revenues for the 19 tech companies rose 7% annually in November, but the figure was markedly lower than October's year-on-year rise of 13.63%.

Of note, Nanya Technology, a smaller peer to Samsung Electronics and Micron in making DRAM chips, recorded a 5.59% sales decline on the year in November, its first annual drop since September 2016. The leading memory chipmaker in Taiwan enjoyed strong revenue and profits earlier this year and last year, mainly benefiting from the higher average selling prices of DRAM over the period.

Many business executives recently voiced their concerns for a tougher year ahead. "There is a clear slowdown in chip demand for mid-to-low-end phones and automobiles," said SC Chien, president of United Microelectronics, the world's No. 3 contract chipmaker and TSMC's smaller rival. "We don't see a demand pick-up until the first half of 2019...the trade war is causing some impacts and bringing a lot of uncertainties," referring to deteriorating U.S.-China trade relations.

Pegatron Chairman Tung Tzu-hsien in late November told reporters that increasing friction between the two countries will create a large obstacle for global economic growth in 2019, "which is already teetering one way."

Foxconn, the world's largest contract electronics manufacturer, plans to cut 100,000 employees by the end of this year in expectation of a challenging year ahead, the Nikkei Asian Review reported.

"We see weakness in mid-to-low-end smartphones as well as other consumer electronics," GF's Pu said. "The global economy is slowing while trade war uncertainties fuel negative sentiment which will in turn soften demand."